What Questions are we going to ask for the Q&A

I apologize for reviving this topic, but I really like the easy path it gives to keeping up with the Q&A.

However the real reason I posted was because I have a Q&A question that I was hoping someone could ask for me. My team won’t be registered for at least a few more months, and I would like an answer before then. The question is basically: “Is a AA battery powered non-VEX flashlight used solely for driver feedback (aiming) legal?” My main rule I would be leaning on is R12g.

Here’s the question as I would ask it in the Q&A (feel free to make minor wording and formatting edits as you see fit; I don’t have much experience writing Q&As), and I would really appreciate it if someone could ask it. Feedback is also welcome. Thanks!

e. Internal power sources (e.g., for a small blinking light) are permitted, provided that no other rules are violated and this source only provides power to the non-functional decoration (i.e. does not directly or indirectly influence any functional portions of the Robot).
f. Decorations which provide feedback to the Robot (e.g., by influencing legal sensors) would be considered “functional,” and are not permitted.
g. Decorations which provide visual feedback to Drive Team Members (e.g., decorative lighting) are permitted, provided that they do not violate any other rules and serve no other function (e.g., structural support).

There is some ambiguity as to the extent to which these exceptions may be taken. The specific question I have is whether a non-VEX flashlight powered by a sperate power source (e.g. AA batteries) used solely for the purpose of providing driver feedback for aiming at the high goal would be legal.

Point e legalizes internal power sources for a small light (in this case it would be a bright, solid light).

Point f is not being violated as it is not being used to provide feedback to the robot, and it is not messing with or influencing other legal sensors (on any robot).

Provided no other rules are being violated (such as blinding other drivers, structural support, etc.), would this use of a commercial off the shelf flashlight solely for the purposes of driver feedback be legal? If not, why? Also, if this use would not be legal, would mounting it such that it never went above the height of the sides of the field be legal?

R12 b states that

b. Small cameras are permitted as non-functional decorations, provided that any transmitting functions or wireless communications are disabled. Unusually large cameras being used as ballast are not permitted.

If the flashlight used only to aid the driver in aiming at the high goal would not be legal, then would a small camera with a flash that was on for the duration of the match be legal (provided no other rules are violated)? Would it still be legal if the flash was used for driver feedback?

the main argument against using laser pointers, flashlights, or other light-projecting devices to assist aim would be of safety concern. It’d be pretty annoying and potentially hazardous, depending on the light, to have a robot with something like this constantly on, pointing at an upwards angle, which would be pretty likely to shine directly in the eyes of people around the field.

I agree here for the safety reasons. However, I could see an exception/allowance if it was never pointed (nominally, barring contact with other robots or field elements) above the level of the field perimeter.

Now, if you don’t have a turret, then just pointing at a spot on the ground a few feet ahead of a robot might give you enough aiming guidance and still meet safety with a better margin.

Final point, though: could flashlights/laser pointers/etc. potentially upset other robots utilizing sensors, like a color sensor that was calibrated for field lighting conditions would get thrown off if that light crossed its path.

My prediction is that this will be a “No.” if asked, but it’s probably worth clarifying.

But I’ve edited it to make that clearer

Pointing the light horizontally such that it couldn’t blind anyone would make it safe, but then it has a solid chance of effecting other robot sensors, such as the line tracking sensor which is pretty commonly used for very close range object detection, or some other light/vision based sensor.

I don’t think it’s really worth the risk and inevitable debate with a confused inspector, just get better at aiming really.

For anyone else confused like I was, [Screenshot_20220804-135749] Though maybe G3 will supersede this (I think it should, as long as there’s no obvious way for moving flywheels to affect scoring). Food for Q&A thought

Could someone ask if refs actually need to wait for flywheels to spin down to score, please?

Could someone ask if refs actually need to wait for flywheels to spin down to score, please?

I mean, do we really need this level of hyper-precision? If the spinning flywheel has no ability to change the field, does it matter if refs start scoring before it stops in the interest in keeping the event on-time?

Game elements come to a stop. Not caring about your robot. Well there are the hanging games, but not this time.

Not caring about your robot.

Note the rule states specially to wait for robot to come to rest. I am ok with flywheels spinning as long as no interaction with game objects or displacing itself on the field.

Note the rule states specially to wait for robot to come to rest.

I noted that and went "Umm, not going to wait 30 seconds for your flywheels to maybe spit out a disc.

I’ll wait for the GDC to rule on “flywheels must stop before scoring” as a must and then I’ll re-campaign on BO3.

Expansion while driving over the barrier

Both robots A and B pass inspection and fit within the size limit. However, robot A is very close to being 18 inches long, and robot B is being very close to being 18 inches tall. As these robot drive over the barrier, they change there angle and orientation. As robot A drives over, the bottom front of the robot and top back of the robot are now more than 18 inches apart in the x (horizontal) axis. The same thing happens to robot B in the y (vertical) axis.

To start, this q and a seem to give the impression that the legal size does not rotate with the robot. Is this correct?

< SG4 > Horizontal expansion is limited until the Endgame. Robots may not expand beyond a horizontal area of 18” x 18” at any point during the Match prior to the Endgame.

Would robot A be expanding beyond the 18" x 18" area and violating rule SG4 even though they are not physically expanding?

< SG5 > Vertical expansion is limited. Robots may expand vertically within the following conditions:
a. The Robot must not be contacting the gray field tiles in either Low Goal.
b. No part of the Robot may exceed an overall height of 24”. This height limit is a “virtual ceiling,”
meaning that no part of any Robot may ever exceed 24” above the foam tiles, regardless of
Robot orientation.
c. Any extensions or combinations of extensions above 18” must fit within a vertical cylinder 2” in
diameter.

Would robot B be expanding beyond the 18" high limit and violating rule SG5 even though they are not physically expanding?

Should inspectors check and see if teams are at risk of violating either of these rules during inspection? If one or both of these robots is committing a rule violation, how should the referee know if such a violation occurred Especially considering it would be a small expansion beyond allowed tolerances, and it would not last long. And finally, would this be considered a major violation? The argument could be made that it is a teams own responsibility to know the size of their robot, and the team would be making a conscious decision to drive over the barrier thus intentionally violating the rule intentionally. Also, this violation would strategically impact gameplay as it would likely save the team time rather than driving around the barrier.

Also, would the answer be changed at all if it was a robot driving over a disc instead of the low goal? And would the ruling change if the robot got stuck outside the legal size limit while driving over the barrier/disc.

Below is an image showing the scenarios. The barriers are in red, the tiles in light gray, the robots in dark gray, and the legal size area in light blue. 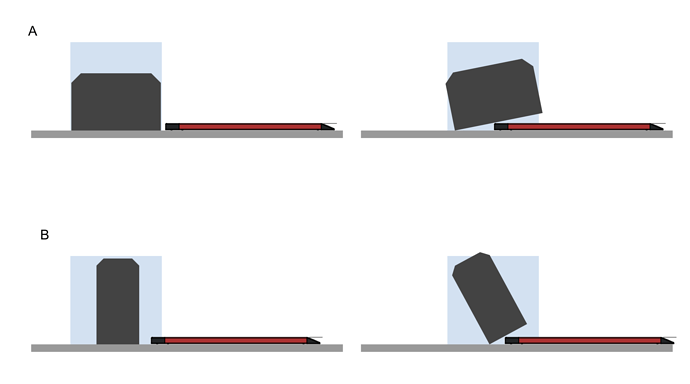 Thank you for taking the time to answer these questions.

I will be posting this later in the q and a, just thought I would show it to the forum as you can’t view unanswered questions. Personally, I feel these would both be violations, but it would be very hard to enforce these rules.

Also, if you have any thing that you think would be useful to add, I can add it on before I submit.

Below is an image showing the scenarios. The barriers are in red, the tiles in light gray, the robots in dark gray, and the legal size area in light blue.

First, remember that these are not official answers, but the quick answer is that referees do not look at these incidental and unintentional bits of expansion that occur when a robot bounces over a barrier or comes to a quick stop and rocks up onto its front wheels, etc, and momentarily but unintentionally breaks the expansion limit.

I know that. However, driving over the barrier is not unintentional or incidental. That’s why I think it might be illegal.

One question I would ask is, “Due to SG5A banning expanding in the low goal, Would the robot in figure B not be in violation entering the low goal but would be in violation by exiting?” or something of that nature. It is just so that if they do rule it illegal, it could be a fallback to preserve some rights.

I think in the way the rules are written and the situation you described that the robot does violate SG4 and/or SG5. Another example of this could be driving over a disc which lifts you up slightly, and to that point what happens if you get stuck on a disc?

I don’t think that these situations should be legal and that some clarifcation is necessary.

I’m going to assume that it would all illegal or all legal as either way all vertical expansion must be beneath 18 inches unless you do the weir cylinder thing.

I think in the way the rules are written and the situation you described that the robot does violate SG4 and/or SG5. Another example of this could be driving over a disc which lifts you up slightly, and to that point what happens if you get stuck on a disc?

I’ll edit the original post, but I think that would be less likely to be ruled illegal.

The sizing box moves with the robot though. If the robot didn’t expand I don’t see why it would be out of size.
your example:

Except it very clearly doesn’t do this. The GDC has explicitly stated that the sizing box is parallel to the ground.

Good point, however this case seems a bit different. The robot does start within 18x18x18 parallel to the field at the start of the match.