Teams 448X, 21S, 6671X, 1437Z, Aaryan Wadhwa, and Noah Hosaka proudly present our 2019 Robot in 3 Days, Goofy. This robot was designed, built, and programmed from 12pm on June 4th, to 12pm on June 7th. We hope that teams can take inspiration from this build and learn something about Tower Takeover. Documentation coming soon, and feel free to ask any questions!

Thanks for viewing and good luck to all teams this year!

Oboi! Finally a good robot for copying!!! Thanks Anomaly

But imagine if your partner pushed 3 low cubes into the zones. RIP

EDIT: Nvm, you could just pick one up lol.

Thanks @Anomaly! Great robot, and the fact that it’s a Ri3D makes it even better!! 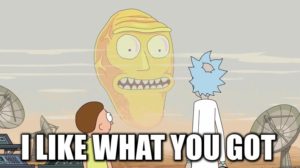 This is really cool, not only does it have very interesting design concepts, but it was built in 3 days!

Also what if the cube holder had 3 stages?

Are you able to take the cube out of the tower and into your intake?

Keep up the good work!

Are the cube pickups shown an average example of robot performance, or a “best take” scenario? (Obviously, the “best take” can be made more consistent with more than 3 days.)

We designed a 1 way gate mechanism under the tray so that the cubes won’t slide down, but due to time constraints, we didn’t get to put that into use.

For the 3rd stage, we had a passive cascading mechanism such that when the cubes were pushed to the top, it would push the last stage up as well. Unfortunately we ran out of time and didn’t put that into use, but it was confirmed to be effective as we did some testing afterwards.

I can confidently say that the cube pickups shown in the video are pretty realistic speeds. We spent a great amount of time tuning the angle and tension of the rollers.

hey what did you use to lift the intake . Like where did the motor go that lifted the intake that removed and placed cubes in the tower

hey what did you use to lift the intake . Like where did the motor go that lifted the intake that removed and placed cubes in the tower

The motor is at the back end of the robot, opposite the intake rollers. It’s a little tricky to see, but at 0:13 the motor is almost directly behind the Spur-Flies sticker.

The motors and structure at the end of the arm, and the over-40 hole length of the arm, made it’s rotational inertia extremely high. We decided to gear the arm 1:7 for torque on an 100 RPM cartridge, and it probably would have been prudent to add some rubber bands as well. (3 days are a lot more limiting than we realized starting this project, but if this were a competition robot, we’d definitely throw some bands on.) The arm was noticeably slower going up than coming down but it’s used infrequently enough there weren’t any stalling issues.

We also were careful to make the roller arm structurally sound. The arm is braced at the back with 2 5 wide c channels standoffed together in 3 different places, and a high strength shaft spans the robot to connect the two sides of the assembly. The 2 by c channels that constitute most of the length of the arm are also boxed with 2 additional c channels. Any racking or twisting adds friction (in addition to other other problems) so we wanted to beef up the arm as much as possible.

Did you use the VEX linear slides or did you custom make sliders for the 3rd stage cascade?

Did you use the VEX linear slides or did you custom make sliders for the 3rd stage cascade?

We used custom sliders with bent 1 by pieces to hold 2 x 2 L channels together. More about these in the documentary!

Hmm sounds interesting. Can’t wait for the documentary to come out!

Also, I noticed that the tray is a lot faster moving back than moving forward. Is the tray on a slip gear or is it just banded like that?

Hmm sounds interesting. Can’t wait for the documentary to come out!

Also, I noticed that the tray is a lot faster moving back than moving forward. Is the tray on a slip gear or is it just banded like that?

Jess coded the arm to move at a much lower speed when out taking a stack to keep it from toppling over. The arm could move much faster, but we found it deposits the stack more reliably at the lower speed.

This is GOLD. Best bot so far.

This is really impressive. Thanks to everyone involved for putting in so much time and effort towards a great resource for the entire community.