I’m trying to upgrade our robot to “all-wheel” drive.

We already had a chain drive with a 24 tooth middle sized gear on the motor to the smallest 8 tooth chain drive gear on the wheel back wheel. Which makes for a FAST bot.

This works. But makes it only a rear wheel drive and we also had to slow down the speed via the code to get traction.

I’d like to change it to a chain drive in a triangle with a 32 tooth on the motor to two 16 tooth one on both the front and back wheels. Similar to what is on the Ben Lipper Razorbill or Avalanche (ps. We aren’t building either but that is a good example of the gear build we are shooting for).

When I set the drive up in a triangle. The motor will not even turn the wheels if the robot is on the ground. If I hold it up they will run.

What am I not thinking of?

Not quite following the entire story, also not too confident in your sprocket sizes since neither 8 nor 32 tooth sprockets are a thing haha

Could you post some pictures of what you had and what you’re trying to use?

This is what we had. 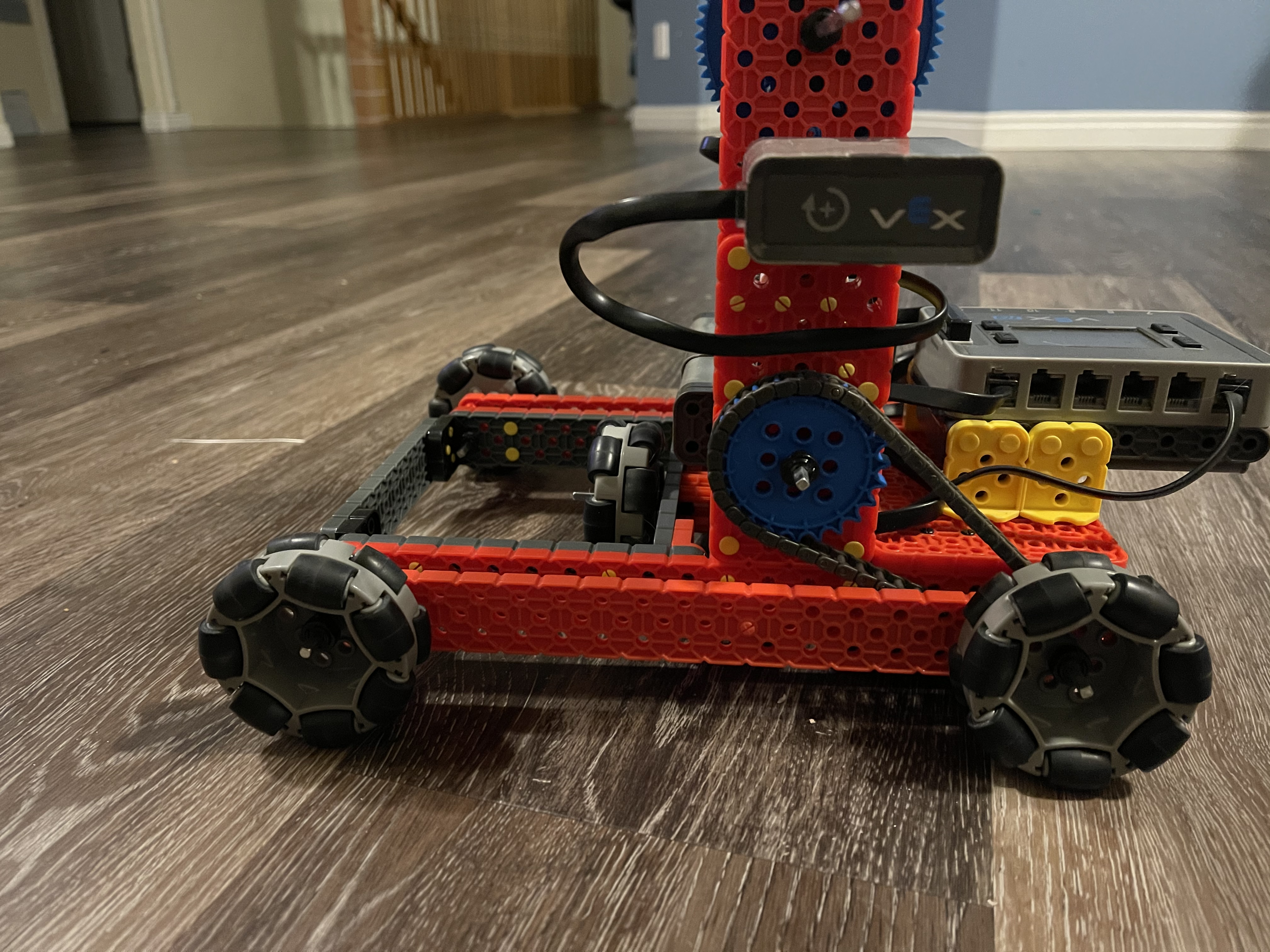 This what we switched to. 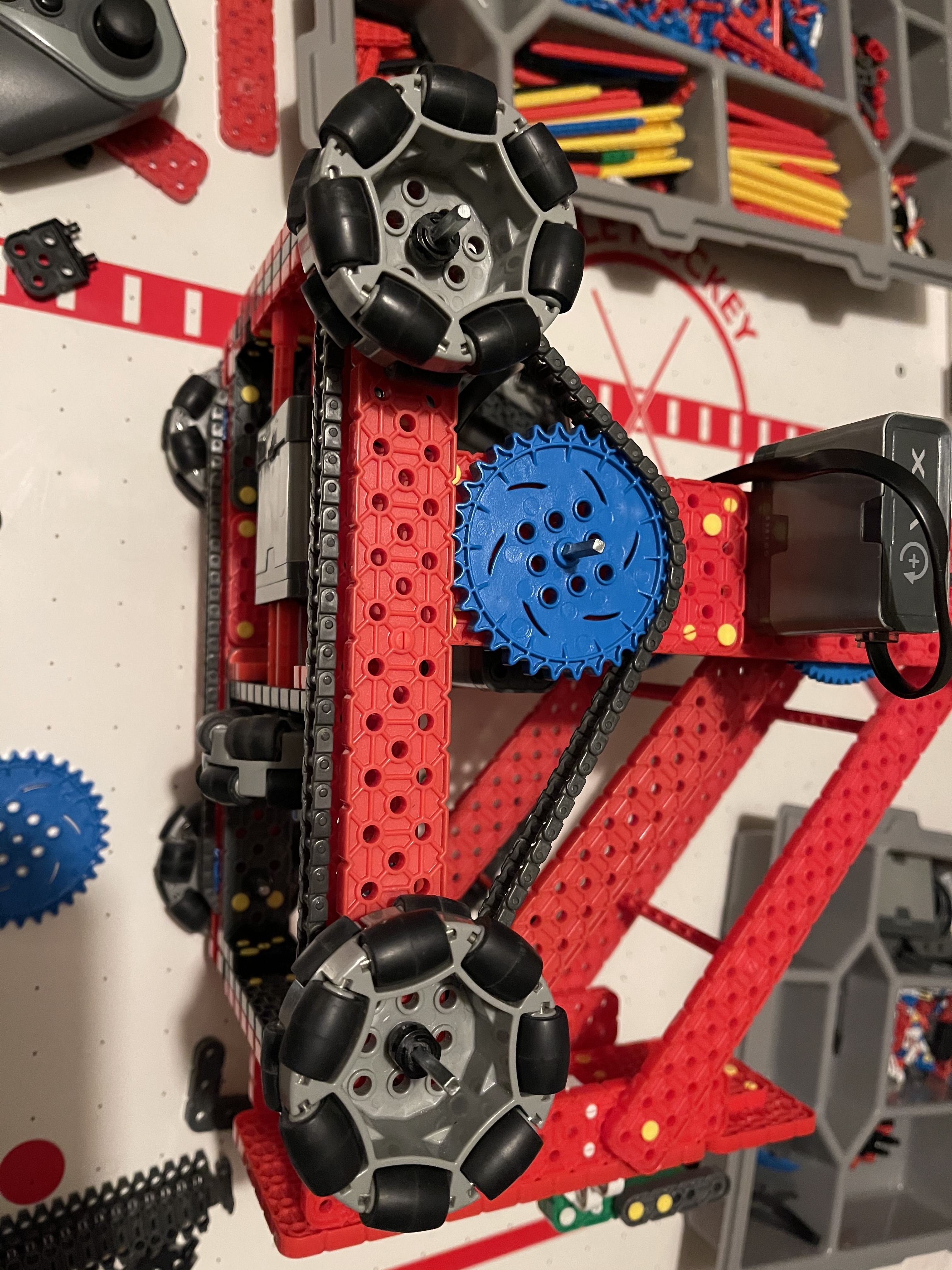 I think the top sprocket will end up skipping. I would switch to gears if possible

When I first look at this topic, I see that it says “Vex IQ General Discussion”. When I see that 32 tooth sprockets are mentioned, my first thought is not “this person does not know their sprocket sizes”, it is “maybe Vex IQ has different sprocket sizes than VRC”.

As for the original question, my first test would be to take the motor off and see if the assembly wheels spin freely. If not, the tightness of the chain is generating too much friction.

I added a link to the chain on both sides.

And it works! But seems super slack. Hmmm.

It is working though thank you.

I have only competed in VRC but I have learned that triangles of chain are always dangerous. I would warn of it skipping.

The speed is about the same. But now both wheels are driven which helps when we are carrying elements on the front to keep traction.

Thanks everyone appreciate it.

Try putting a standoff or an additional sprocket somewhere in the mix, that should help tighen up the slack, but don’t make it too tight.

Thanks for the heads up we will watch out for it.

A standoff that the chain just runs up and over?

normally under the standoff. That way there is more contact on the gears. It will also help with skipping

yeah my bad I didn’t realize the tag was vex iq albeit most posts on the forum are by VRC people.

So I’m not too sure how much you ended up reducing your original ratio in code but the ratio you had there was 1:3 and this new one is 1:2.

I do now see that you fixed it meaning the problem had to do with chain being too tight. And since it is now too loose if you tension it, I’d make sure it pulls it towards the sprocket to prevent skipping (though you have to be careful though any additional friction in a high speed application is dangerous).

Yup. No problem. Appreciate the info I was only sort sure they existed lol.

We had the original drivetrain slowed down via code to half speed. We had a “turbo” button coded which really just let it run at full speed when you held a button down. So now it is approximately the same speed running at not coded slower speed.

What we were really after was the front and back wheels to be driven and this will fix it. Now that it is working maybe I’ll try the smaller sprockets to see how that runs.

I’ll play with adding a standoff.

I completely understand your concern, and I thought the same thing. But after Batman won (and arguably dominated) worlds with this in the NL season, we decided to try it. We have never had a problem with the chain skipping on the top sprocket, provided you make make the chain have enough wrap. Enough is pretty much where the bottom of the top sprocket is at least above the top of the drive rails. Gears can work for drivetrains, but can have unwanted friction.

Ok. Again, I have only competed in VRC. I don’t know all of the ins and outs of IQ. I just know in VRC this could have a high potential of failure and I wanted that to be noted.

This can also be a big point of failure in FRC, which is why we were skeptical about it at first as well. Thank you for your help, and we all appreciate feedback like this from experienced people.

My best tip for this problem is try not to make your wheels cantilevered (shaft supported from the bot on only 1 side of the wheel) to reduce fluctuations in slack, and to make the chain shape as close to a right triangle as possible. Also, if the chain had no slack, it wouldn’t be able to move. Just wrap the chain as tightly as possible without having to tug hard.

Sounds like it could be a torque problem, but based on the fact that the ratio of the previous drive had less torque and worked fine, it could be a chain issue.

So about the chain- contrary to what most people are saying, this does not look to be primarily an issue of having too much slack (although, that could very well also be the case), but rather that the chain does not have a high enough wrap angle with the sprocket. Allow me to explain. 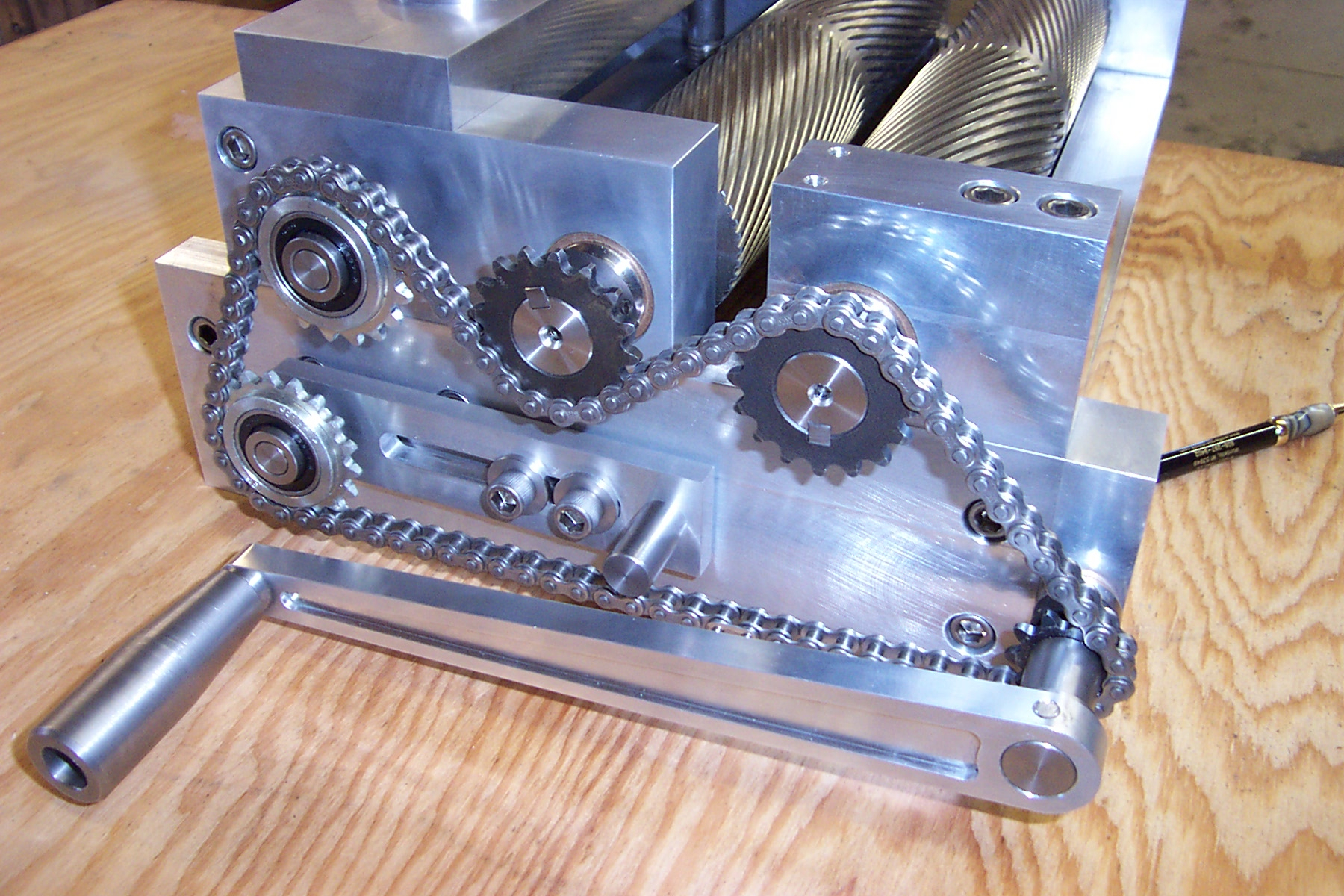 This machine’s chain drive illustrates the proper use of a tensioner and sprockets with adequate wrap angle. With more wrap angle, you get more contact between the chain and the sprocket, thus mitigating the possibility of slippage and ensuring that all the torque is transferred properly. 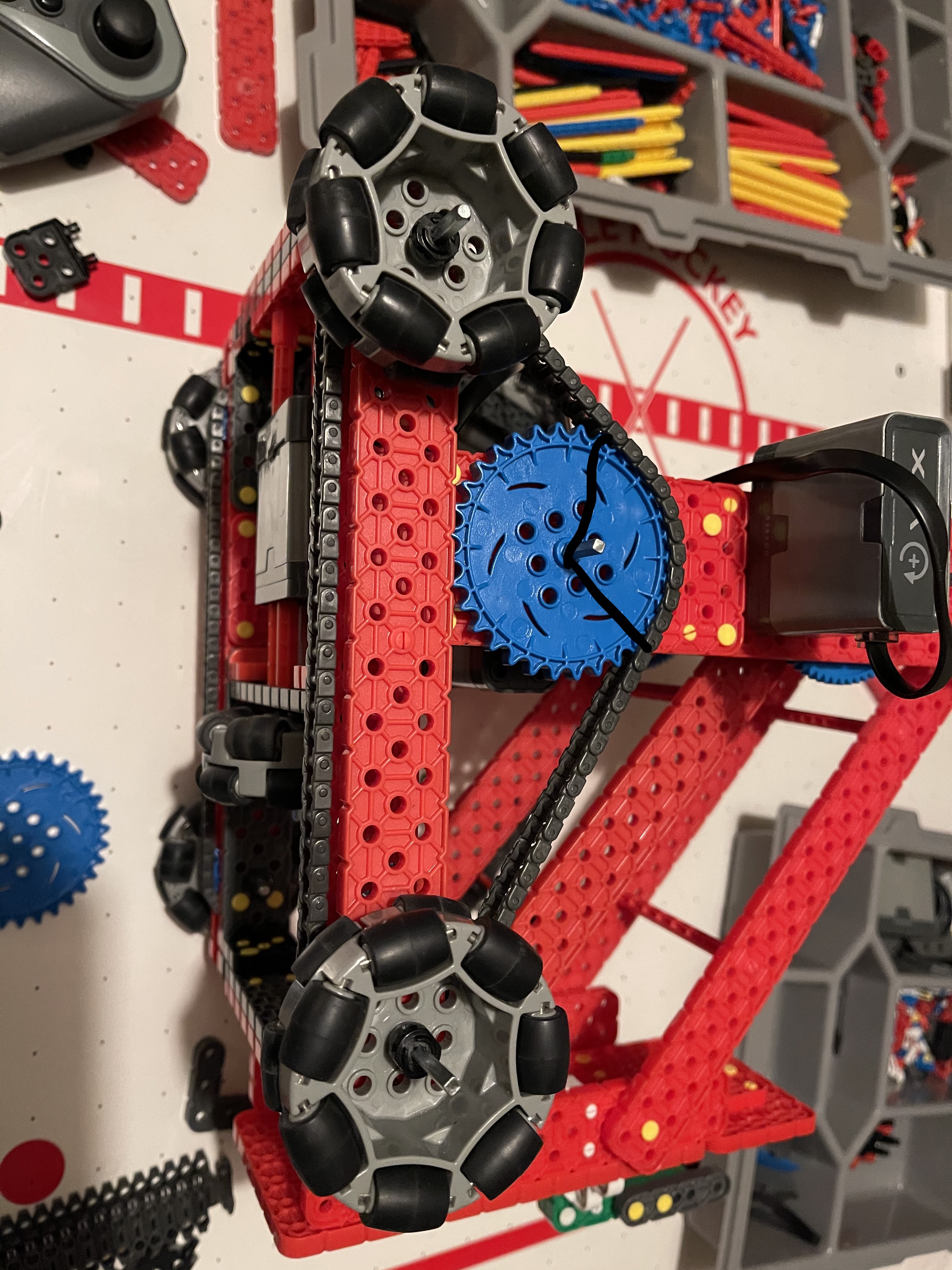 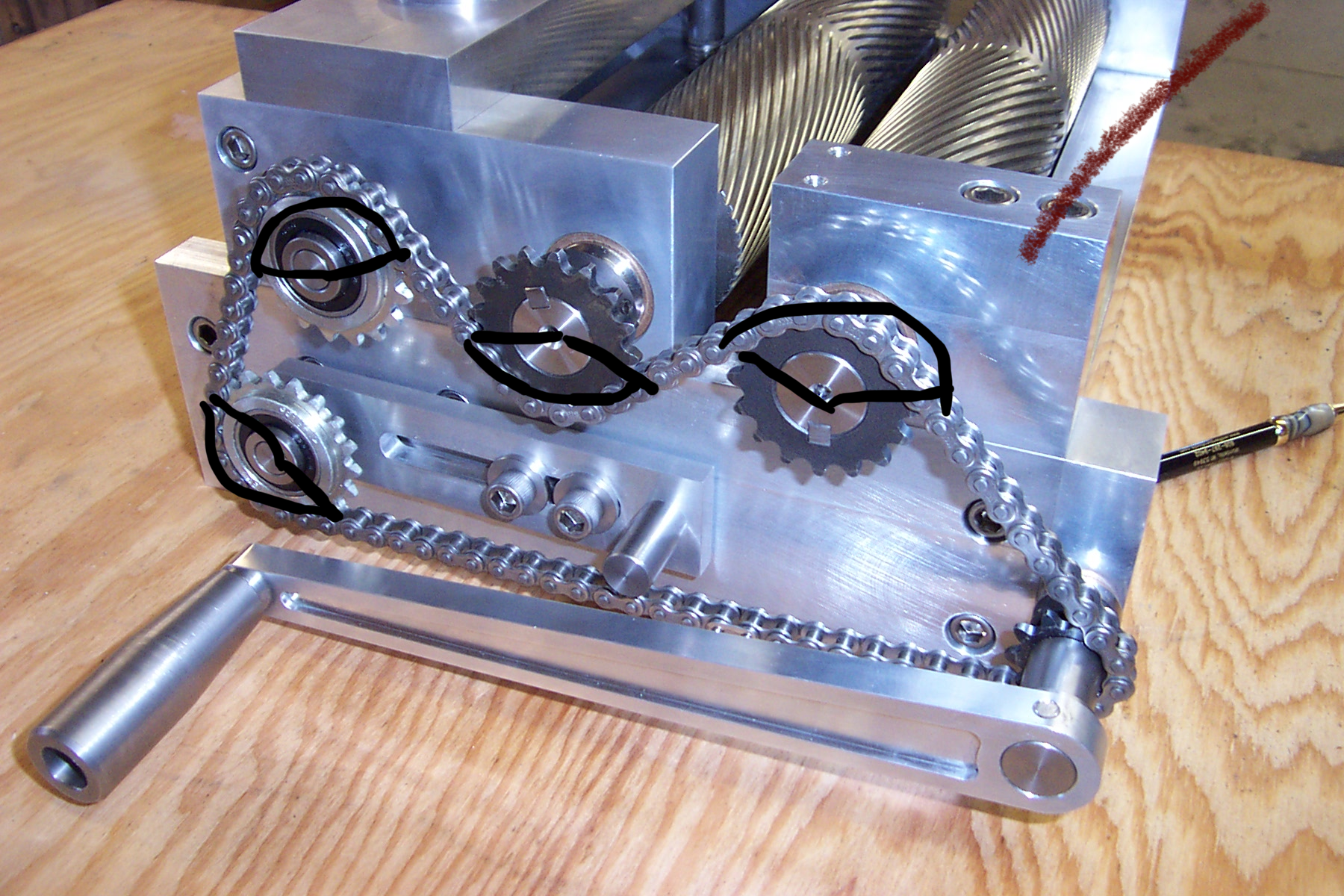 I would recommend that you increase the distance between the center of the sprocket and other two until you have a wrap angle of at least 135° (looks like yours is around 110° or so at the moment) to allow for the driving sprocket to properly transfer power between the two driven sprockets.

Check out this ANSI chain selection guide for more information on chain drives (full disclaimer- vex doesn’t follow normal industrial chain and sprocket standards so you may want some extra wrap angle than what they recommend to be safe):