This is a CAD model I spent a few days working on. I was unable to finish it due to the limitations of my computer. Either way, I came up with this idea a few days after the game reveal when I worked with @Xenon27 on his CI2D. This in tandem with discussions of some strategies with the SCA for what an ideal robot should have for this year and the idea of a trap door came to mind. The CAD itself was made over the course of the early season in bits in pieces because my computer doesn’t know how to cooperate.

A trap door is essentially a subsystem on a flywheel that passively (or actively) cycles out unwanted balls from within the robot. This enables for an overall more efficient collection and scoring system because the robot does not need to move from scoring position to cycle out unwanted balls. For my particular design, I had the flywheel hood act as a “trap door” so to speak. The balls will be intaked upwards and plopped out the back of the robot when the hood shifts forward. 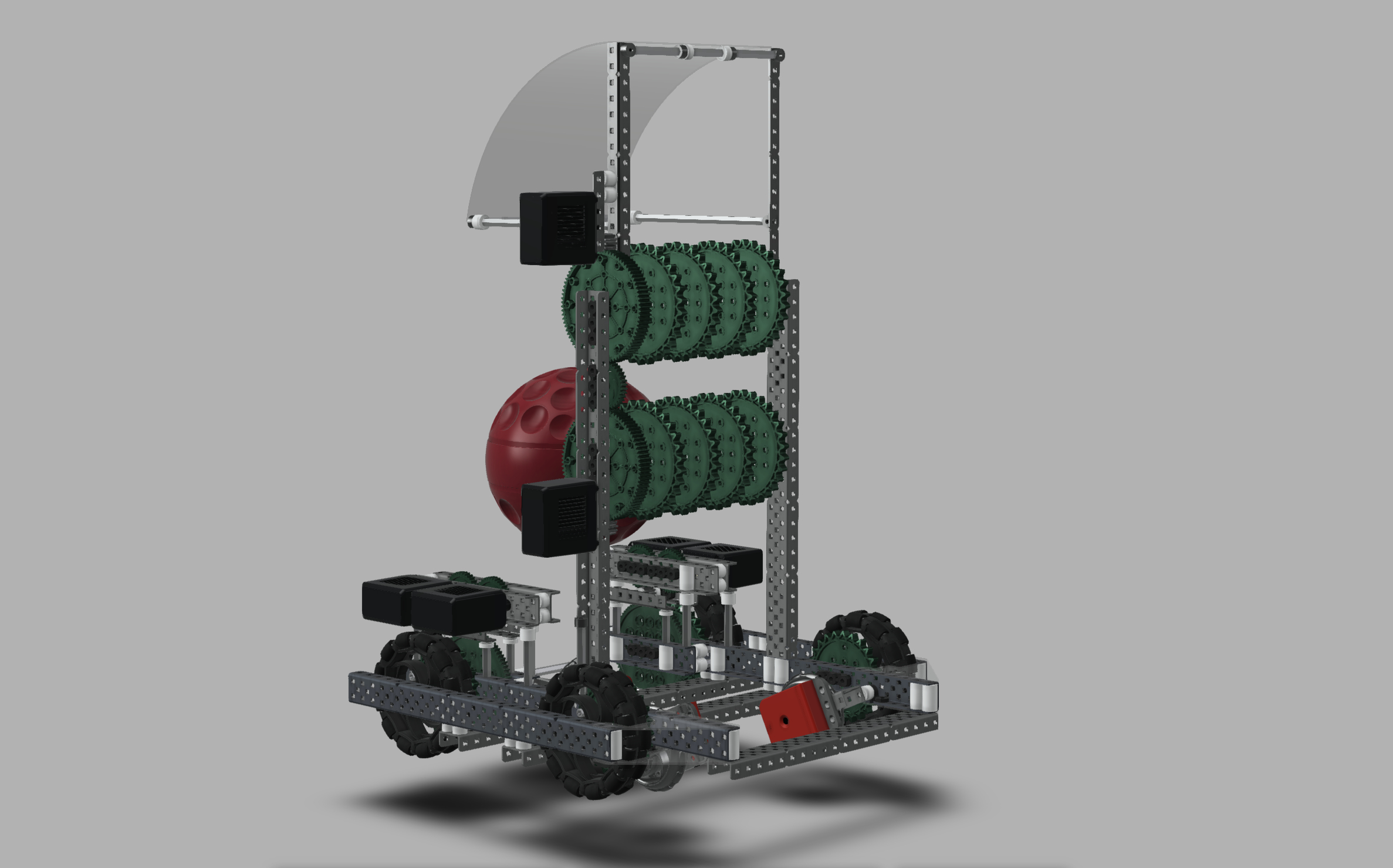 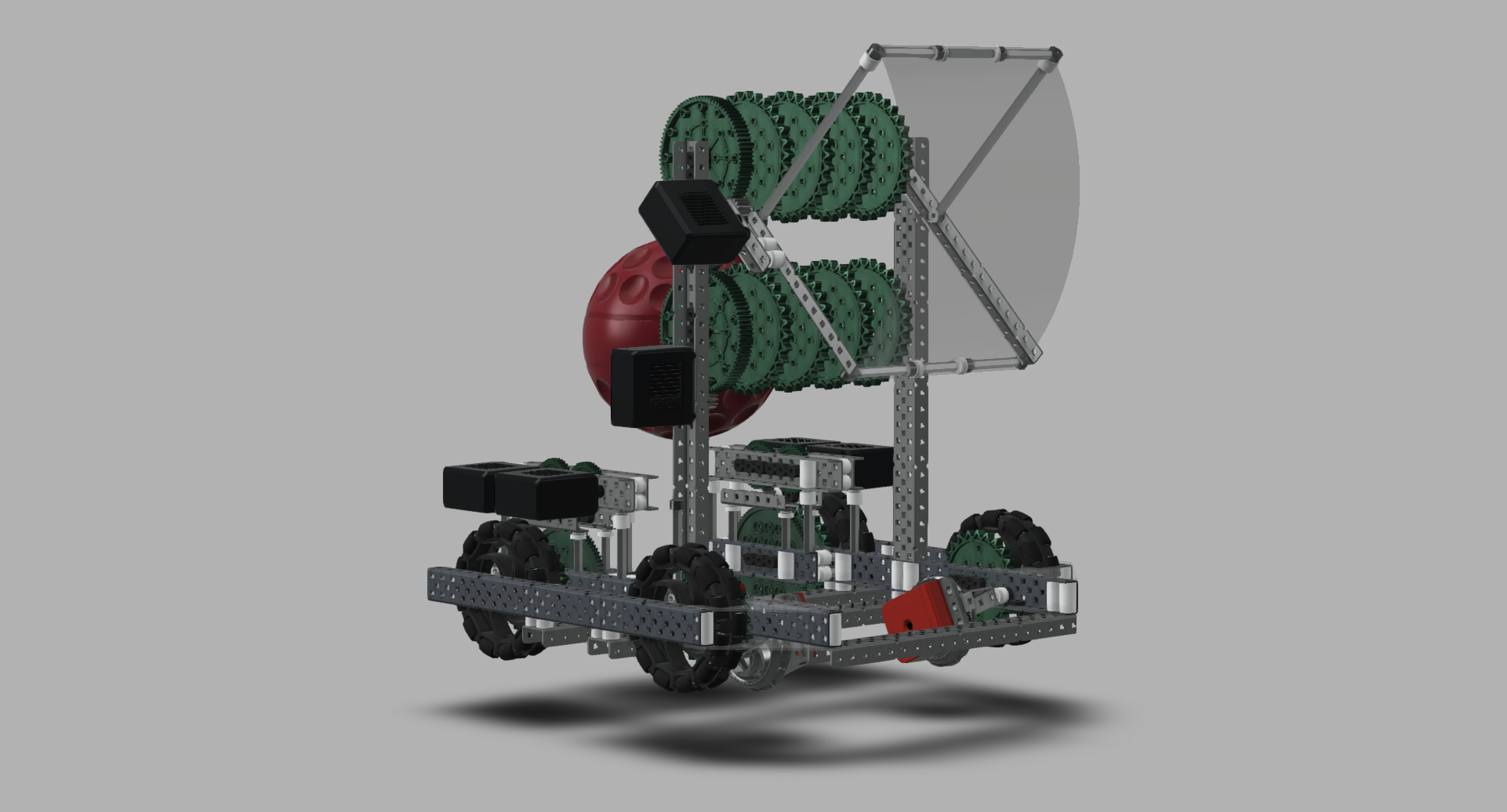 there is one thing to note: *I intentionally made the dimensions of the CAD off in size in a few places that will make this robot impossible to hole count So don’t try it lol

32 Likes
VEX Differential Guide
How do I gear my drive upwards?
Help with code to make 2 motors spin at EXACTLY the same speed
What to do without Pneumatics
Vex Spin Up Endgame Expansion | 67101C
Ratchet Motor Sharing
Using 1 Motor to run 2 Mechanisms
Dimension_360 June 7, 2020, 11:23am #2

I like the concept! Nice job! Can’t wait to see it in action!

Overall, that’s a really nice bot you’ve got over there! Great Job!

On the note of your computer having issues, don’t put in motors until the end as they are a lot of parts. The same goes for Omni wheels.

Really nice design! I think this will be a popular choice!

The CAD looks great, it’s definitely unique from all other designs so far.

there is one thing to note: * I intentionally made the dimensions of the CAD off in size in a few places that will make this robot impossible to hole count So don’t try it lol

this is probably better than a trapdoor, because it will have less friction than a ratchet (or three ratchets) if built properly. It also have the potential to create more opportunities using the adjustable hood, perhaps you could control the trajectory of your shots so you can have like a foot or two of distance from the goal where you can still land shots.

If u use the library from the CAD discord, motors are only one part

In my honest opinion, that’s a pretty cowardly thing to do what’s new?.

I feel like you went too far here Taran, but I completely agree with everything else you said. I have to admit, I have come a long ways from my first year in VEX (TP). That is because of people like Taran who are willing to just put their working designs (while not always perfect) out there for people to question, criticize, study, and learn from. Nothing is EVER going to be perfect in it’s first design, and most of what is put here in the VEX Forum is in its first design. It’s so people can improve it, or even make their own designs which were INSPIRED by the first-stage designs. If you are going to put something out there, don’t make it a lie. Put it out there in its true form.

Honestly, VEX has become WAY more competitive than when I started (only 2 years ago!). The original purpose was for kids interested in programming, building, and learning about robotics (or STEM in general) could come to learn and collaborate. We need to come back to that stage where we are not afraid to help others in their passion.

Honestly, VEX has become WAY more competitive than when I started (only 2 years ago!).

Just because you weren’t aware of that more competitive scene doesn’t mean it didn’t exist.

bruh taran none of this is to get recognition.

I never hide anything on my designs, in fact most of my robot is completely public. And this topic was just made to demonstrate a concept, without giving a tutorial on how to build it.

this has nothing to do with matt, so don’t even try to bring him into this.

This topic does help the community, as do all the SCA topics. If you have a problem with how @mvas presents his ideas, take it up with him, don’t attempt to immaturely derail his helpful and insightful topic because he didn’t want people to holecount.

Just because they’re avoiding holecounting doesn’t mean they’ve “fallen.” It serves as a proof of concept, while not allowing people to directly copy. Directly copying is not learning. I mean yeah you see how it works, but there has to be some degree of originality. Plagiarism is illegal, because copying someone else’s work and calling it your own is wrong, but for educational purposes it means you ARE NOT LEARNING ANYTHING. If anything @mvas is promoting learning opportunities by forcing people to see ideas, and recreate them originally, as opposed to copying and not learning anything. Releasing all or some info is completely up to the discretion of the designer, and no one else…

This… I don’t like this. Doing this is just plain old mean. By doing this, you’re not sharing ideas to try and help others. You’re trying to get the benefit of getting your name on a design while keeping the advantage that keeping the design secret gets you. If you make a design public, it should be there for everyone to use.

I’m going to be real here, I don’t see any aspect of whatever @mvas has posted here that isn’t “sharing ideas” or “helping others”. If anything, I’d argue that whatever he’s doing is trying to mitigate the impact that holecounting can have on regions and instead guide other teams towards basing their designs off another robot.

Let’s not bring this to a personal level here.

BY THE WAY , I’m not even competing in Vex EDR next year for anyone wondering. This was just a fun little side project. I will be planning on joining a Vex U team whose robot will probably be mainly 3D printed anyways. So for anyone wondering if this had some personal deeper agenda to it, it really doesn’t. Quarantine is just really boring.

We should stop arguing and let it be,
@mvas This looks like a good idea I am excited to see how this turns out

Let’s not bring this to a personal level here.

?
I’m defending personal attacks on SCA made by taran, he’s the one that made the attacks.

SCA exists to help each other, and to better the vex forum community. This topic is a great example of a helpful post, that outlines a well thought out concept. I personally don’t take any measures against holecounting, because I don’t care if someone tries to holecount my stuff. And just because @mvas did take measures, he’s doing it because he doesn’t want people to copy and not learn anything. This is a concept, not a tutorial. It isn’t meant to give teams instructions on how to build. It’s meant to give inspiration and ideas to team looking to up their complexity.

and tbh, if you need to holecount to have a robot, you shouldn’t be attempting a differential anyways.

Now can we please get this back on topic?

I wasn’t saying that to anyone personal. That was for all around. I didn’t realize that I hit reply to you. Geesh.

Now can we please get this back on topic?

Just a friendly neighborhood reminder to keep it on topic and civil. Love the idea @mvas! Could be pretty useful!