I have come up with a third redesign which should fix many of the problems. It still has a DR4B to score cubes on towers and release the stack that it is holding. The design now has a four bar for two reason: to have a better center of gravity when driving around and to open the passive intake. The extending reverse stacker is a simple 2 stage mechanism using vex sliders.

The Ultimate Passive Intake is made of two pieces with mesh. The pieces are free to move up to let the cubes in. Then they fall back down and hold the cubes. The force pushing down the cube will also push down the two intake pieces, but since they pivot this will cause them to also push inward. The intake will release the cubes when the four bar goes all the way out.

If this intake works it will be able to hold cubes with variable force based on how many cubes there are.

I am interested to hear your thoughts and ideas about this concept and how to improve it.

31 Likes
Spring Loaded Cube Holder?
Has anybody made any CAD models yet?
Heavy DR4B lift
Ideas for tower takeover: Middle school
Deicer May 25, 2019, 12:59am #2

welp, you are getting very close to my current design, but one thing that sticks out is that you will have the cube surrounded on all 4 sides, meaning that you have to approach the cube at an exact angle to pick it up. Additionally, it will prevent you from stacking higher than the robot can reach because, as seen in your v2, the front closed off section prevents the bot from driving back while completing a stack. How does your ‘variable force’ on your intake work?

The more cubes in your stack the more force pushing down. With this intake the cube pushes down the two side pieces. Since they pivot this will cause them to also be pushed inward. 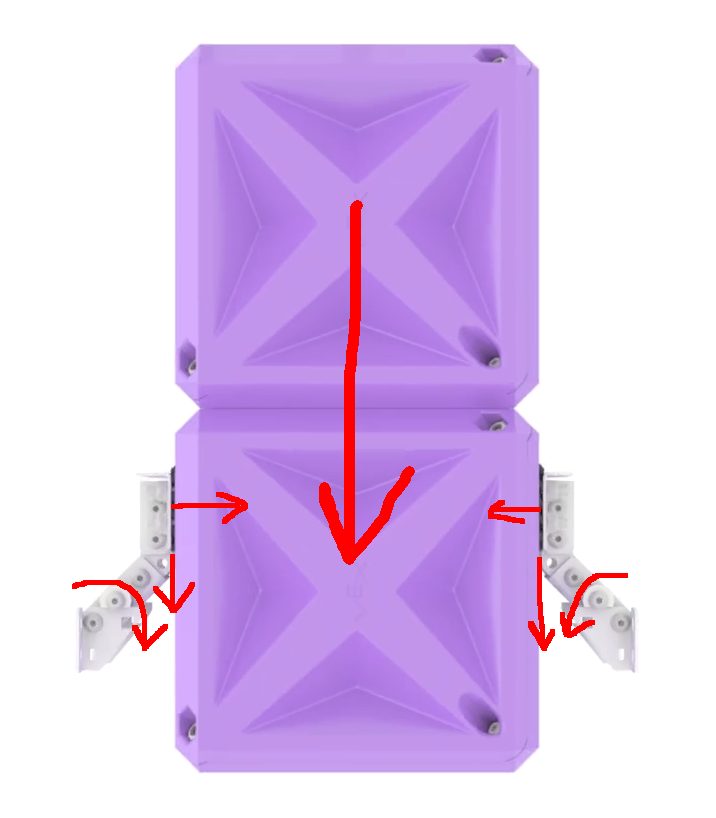 The big arrow causes the two small down arrows cause of friction. This cause the round arrows because the pieces pivot. Finally those forces cause the inward force.

Also how are you going to deal with cubes that dont profectly line up because the cubes wont always be straight up with your bot, which may cause issues with the design.

Yes that could definitely be an issue.

One possible way to fix that might be to have bend plastic aligners to force the cube into the right orientation as you lower.

oh, I see. I thought you were implying you made a mechanism that tightens the elastic for the lock. That being said, there probably is a way you could use that top bar that gets pushed up to tighten it – it’d be hard to accomplish, but it’s something to consider,

How are you releasing cubes at will with something passive like that? It seems like this is designed to bring cubes in, but doesn’t really have any mechanism to let them out, in the video the things just kind of move magically to let the cubes out.

Really cool, great animation, but how does this relate to the expansion limit (just out of curiosity). Otherwise, I like the improvements you made a lot and will definitely consider doing something like this.

Wow, that’s actually pretty genius! However the only major confusion that I see with this design is how out-taking stacked cubes work. I’m not exactly sure how the side flanges will be able to passively release in order to drop them off. Great job otherwise!

how does this relate to the expansion limit (just out of curiosity).

what do you mean?

How are you releasing cubes at will with something passive like that?

I’m not exactly sure how the side flanges will be able to passively release in order to drop them off.

The releasing is powered by the four bar. In this design the two side pieces are forced open then the four bar goes all the way down. In the video there is no mechanism to do this and I haven’t though of a good way to do this, but it could be done.

Nevermind, I thought that there was still the 36" height limit for robots during the competition for some reason.

great job with the animations. and overall idea. will there be a motor controlling the release of the cubes?

No. I don’t plan to. It is also called a passive intake.

The releasing is powered by the four bar. In this design the two side pieces are forced open then the four bar goes all the way down.

i know, but how do the cubes release? i’m still a bit confused on that part. how do you get the parts to be forced open with the four bar?

In the video there is no mechanism to do this and I haven’t though of a good way to do this, but it could be done.

maybe it could string pulling attached to the cube holding pieces and bellow the four bar. That way when the four bar is all the way out the two point where the string is attached is far away. At all other times they are closer. By getting the string to the right size it could force the pieces open.

I am really glad to see that you addressed some of the issues in your last animation. This is by far the best one yet. the only thing I would see is the alignment issue others have talked about.

I can definitely see how you addressed the weight imbalance by using the ITZ-like mogo system (don’t actually know name). But when it flips out, are you sure there won’t be any tipping problems, specifically with weight of the cubes and the momentum gained from the flip? Also, with the passive intake, I think you may run into some problems when trying to stack the cubes. Because of how close the holders are, it may be hard to lift exactly straight up and not knock over your stack. I think it would probably be best just to use a motor because you can pull the holders farther out of the way, giving your drive more leeway. Given your design you have an extra motor unless you decide to use this for something else. Overall this is definitely the best design yet and I’m excited to see what you do this season.

There are ways around many of those problems, like a larger passive for the cube stacking and adding weight to the back of the bot or using the weight of a cascade lift in the back for tipping problems. If balance was a MAJOR problem there is always the option of a cascade facing backwards so one side of the bot sees the height and leverage of the cascade itself while the other side sees the high stacked cubes on the intake.