I was recently at the Heartland Regional and saw a few bots using mecanum wheels. I currently use Omni wheels, but saw some teams with mecanums that couldn’t be pushed sideways and could strafe side to side in autonomous. What are some pros and cons to either Omni wheels or mecanum wheels?

Mecanum is slower with turning and is weaker and slower than Omni, personally the mecanum wheels arn’t worth It for us, we had them before and our drive would burn out when being pushed though we have legacy 6 motor drive

And u can push mech diagonally

Mecanums are indeed a little slower, the wheels are also physically bulkier and heavier, and it’s not compatible with a 2 or 6 motor base. That said, they’re very difficult to side push, but they still park well because they don’t have a locked center wheel. I personally am really happy with my mecanums and I’m not planning to switch back to omnis, but a lot of top tier teams use omnis instead, and ultimately it comes down to driver preference and match strategy.

Mecanum wheels:
PROS:
-could strave sideways, diagonal, where ever you like but the robot remains facing the same direction
-could resist on push sideways
CONS:
-need at least 4 motors (6 also work ( 2 for front, 1 for back, vice versa
-slower because they typically will lose some momentum to sideways wheels while moving strait forward and backwards, same vise versa
-would slip easily

TIP: the mecanum wheels has to be placed in a specific order (all the diagonal wheels should be pointing to the center) 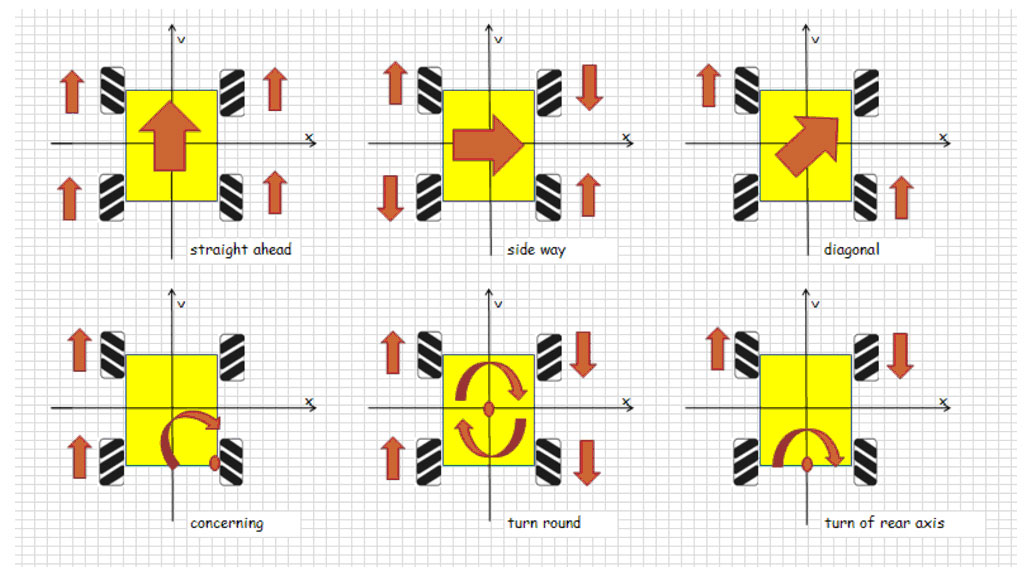 here are the wheel movements to move the robot

Omni wheels:
PROS:
-better grip while walking forward and backwards or turning
-only require at least 2 motors(one for left, one for right)
CONS:
-can’t strave
-can be easily pushed at sides

I’ve used mecanums all season long and don’t have much to complain about. The strafing really helps when trying to make small adjustments to line up shots, grab a ball, or park, it even helps us get out of some defensive situations. While they do turn slower than an all omni drive they are still decently fast and turn about as fast as somebody with two locked omnis on the back of their bot. I tested this with my sister team 11495B by spinning for ten seconds and I only came out half a rotation behind.
There is definitely wasted energy, but I find that this actually helps in autonomous do to how quickly it stops on turns, there is very little, if any drift on mecum turns. However this only applies to V5. A four motor V5 drive has enough power to handle the mecanums, and make up for the wasted energy, cortex will not handle it and you will most likely stall if you do any amount of strafing.

Watched team 1267C at PA States on Saturday. They were very nimble, had lots of speed for that field. Platform climbing was very good. Being able to strafe was a selling point.

We have played against them a several times throughout the season and I can confirm that Mechanum wheels help them out a lot in defense and maneuverability. That convinced us to switch to a pair of traction wheels, so we didn’t get pushed around the field as much. Mechanum wheels with v5 are definitely a feasible option.

Yeah, I saw them not at states, but at Widner University 2 weeks ago. They had great driving, surprised that they didn’t qualify for worlds through a competition award. (but they did through design)

Note that with a few minimal changes to the code mecanum wheels can also be set up with the diagonal wheels set up to form a diamond. (swap the orientation of every wheel in the diagram) This configuration and the configuration you described are the only setups that work though. (I saw a robot at state that had their mecanums set up wrong, so this is worth mentioning.)

Omni wheels:
PROS:
-better grip while walking forward and backwards or turning
-only require at least 2 motors(one for left, one for right)
CONS:
-can’t strave
-can be easily pushed at sides

I didn’t know that wheels could walk…

@Mckay49 What do you think? 8349E and 8349K have Mec and seem to do pretty well for themselves. We would have them for more bots, but you all know about how hard it is to get stuff due to the V5 delay. They are a great addition and I wouldn’t discount them at all. I feel this game goes to the next level with Mec wheels. That ability to move sideways and make a quick on the spot correction is awesome. I have seen that they make the difference when there is a tough schedule . As for the loss in power @James6555 spoke about, I haven’t seen anything really noticeable that a little practice driving didn’t take care of. All in all I think they really helped my guys.

@Sean8349, both of those bots are really good. Me personally, I prefer a bling drive, but It’s more of a matter of driver preference than anything in most situations.

Locked omnis are the best. I saw several teams with just free spinning omnis. They got side-pushed all over the place. I made the suggestion to them.

I’m a huge proponent of mecanums - when it comes to aiming at flags the ability to make minute adjustments through strafing is extremely helpful.
My team used them in NBN and they were super slow so I can understand the current misconceptions about their abilites. With V5 mecanums are an extremely viable option and allow very fast and nimble movement.
I was doing driving practice the other day and only after 2 hours did the drive begin to slow down due to overtemps.

What’s your motor speed and gear ratio on your drive that lasted so long before it burned out?

@5SRobotics The gear ratio is 1:1 and we use 4 200 rpm motors (the key for us is a super low friction base and smooth driving)

6 wheel locked omni drives are all around great. they turn nice, they have good speed, they can’t be pushed around, and they can climb over almost any obstacles.

Do you suppose if I had an overall faster chassis, like 200RPM motors with a 5:4 gear ratio (250RPM), and solely four omniwheels, it would be more effective than 200RPM mecanum wheels?

depends what you mean by effective. If you arrange them normally, they will probably be quicker and could traverse terrain better, but then they wont be able to strafe, which is the whole point of mecanumns.