Mechanum wheels are large, heavy and slow. while omni wheels can’t strafe and can be pushed easily from the side, they excel in all these categories compared to mechanums, so I would strongly recommend omnis over them.

Personally, I would recommend Omni-wheels over Mechanum. The Mechanum wheels that Vex currently is selling do not have high-strength inserts, and therefore have a lot of slack on the axles. Omni-Wheels do come with high strength inserts, which eliminates slack. If you have too much slack, the accuracy of your autonomous could be lowered, and in the worst cases the axle will skip if a circular hole is worn through the middle (learned the hard way last year). I’ve seen some teams use a lockbar on the axle on both sides of a mechanum wheel, but I do not know how effective that is at decreasing slack.

Mechanum wheels are large, heavy and slow. while omni wheels can’t strafe and can be pushed easily from the side, they excel in all these categories compared to mechanums, so I would strongly recommend omnis over them.

Omniwheels can strafe. Just set them up to make an x-drive. They effectively become larger that way because they’re perpendicular to adjacent ones instead of parallel. This does cut down on being pushed some as well.

I’m just saying this now, never use the current vex mechanums… Unless vex makes new ones that are equally as good as the vex pro ones, omnis are the way to go.

Do not use VEX EDR mecanum wheels. So slow, you just can’t believe it. We used them for like 1 tournament then abandoned them for omni wheels. Sold them on ebay.

Comparing apples to apples (Omni-Wheels in an X Pattern and Mecanum in Standard Pattern so that both are fully holonomic), ignoring the quality of vex parts and the user’s design and build, there ARE differences between them.

Not quite. Regular speed, yes, but since only two motors are powering it in the “diagonal” directions, there is less torque

Not quite. Regular speed, yes, but since only two motors are powering it in the “diagonal” directions, there is less torque

Here is a couple of diagrams for holonomic Mecanum and Omni wheel drives (source):

As you can see only two motors are used in case of diagonal movement, which would limit pushing power.

This is more detailed speed, force, and power diagram for omni wheel X-drive from this 2014 thread : 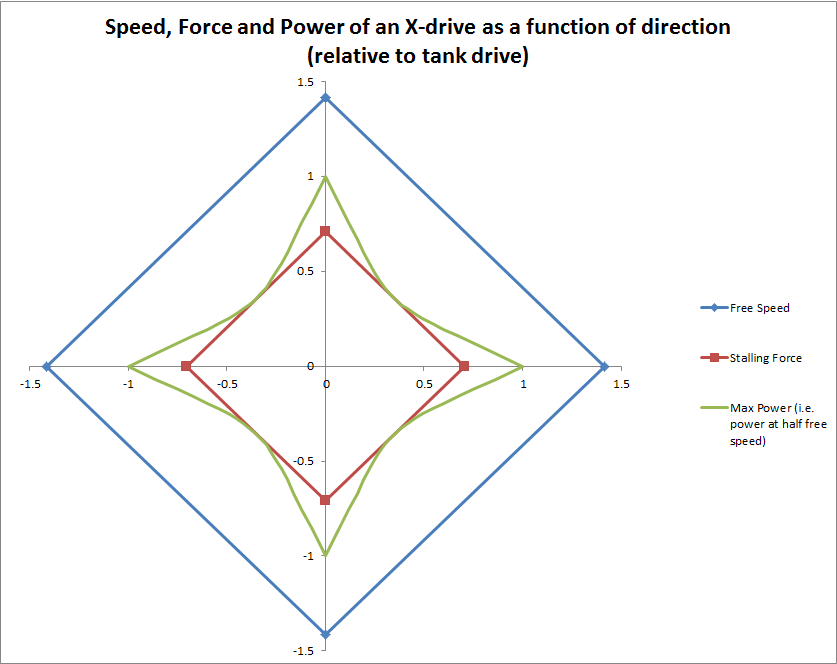 Additional discussion could be found in this 2012 thread or this 2016 thread.

While holonomic drives offer great maneuverability and anti-slip resistance:
https://qph.fs.quoracdn.net/main-qimg-0733fac84c2ecb85e349bfd8dc5c420a
the biggest problem with both X-drives and Mecanums is that when robot is moving forward or backward they produce additional force on the bearings (perpendicular to the wheel’s orientation) and this generates a lot of friction if you have poor build quality or not enough lubrication.

With good build quality you could make a decent Mecanum or X-drive, but you will always get less power losses and more efficient use of the available motors with a simple omni wheel tank drive configuration: It is a game strategy decision if slip resistance and extra maneuverability is worth an additional motor or two dedicated to the drivetrain.

Mechanum wheels are better because they are tilted

Mechanum wheels are better because they are tilted

@xRiloKOTBx I am not sure what you are trying to say. The power loss problem with Mecanum wheels is exactly because they are tilted.

From this force diagram (source) you could see that to generate forward moving forces (T1y,T2y) Mecanum wheels need to have sqrt(2) larger reactive forces (T1,T2) against the ground and exert perpendicular cancelling forces (T1x,T2x) on the vehicle chassis: Similarly this is the force diagram for the sideway movement: and another one for the robot turning clockwise: Depending on the amount of friction you have in all your bearings you could easily need 1.5 times more motors just to keep up with the simple non-holonomic “tank” drive. (It is actually tricky because extra friction in the rollers themselves favors forward-backward movement vs. sideways movement).

However, if you pay close attention to the condition of rollers and keep everything properly lubricated you could have all Mecanum drive that will outrun and outpush every other robot on the field. You just have to decide if extra motors going into powering the drivetrain are worth the competitive advantage you will get.

Every season, when robots need to maintain stable position to score and defensive play requires a lot of pushing, the question frequently comes up which drivebase is the best.

The short answer is that there is no single wheel type that is better than everything else. Each type has its own strong and weak points and you have to find one that suits your driving preferences and gameplay strategy the best.

So what are the strong and weak points of each drive type. First of all you have to consider coefficient of friction for each wheel type on the playing surfaces. This has been discussed before:

For Turning Point season, in addition to driving on regular foam tiles, you have to maintain traction on the plexigalss platform, so another set of tests had to be run.

To do that a dummy base was outfitted with four locked wheels and dragged by a luggage scales, first on foam tiles, and then across a plexi sheet similar to the platform’s surface. About 16 lb weights had been added to the base to simulate a typical robot and to get realistic depression/deformation of the foam and rollers on the wheels. Since the scales were not that accurate, the wheels in the test were not new, and our old tiles may differ from new anti-static sprayed tiles you could find at some competitions, don’t treat below results as the final answer. This test was only meant to compare specific drivetrain options we had at our disposal. In fact, I took a liberty to round the numbers about 3-5% so they look more readable:

The first table shows coefficient of friction calculated by dividing the force by the base weight, which experimentally accounts for both material-to-material and rolling friction: 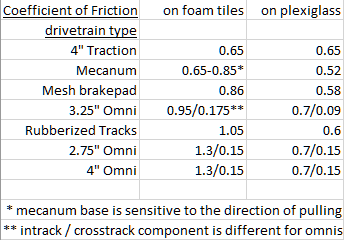 And the second table shows the amount of force (in lbf) required to pull or push a typical 15 lb robot: 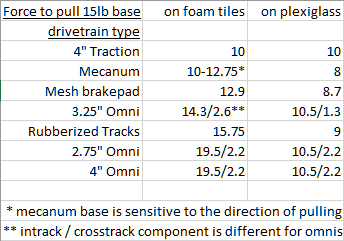 This mostly confirmed what we already read in the other threads with a few unexpected results:

First of all, it is interesting that 4" traction wheels had the same coefficient of friction on the foam tiles and on the plexi. Our wheels are a few years old and round shape don’t make much step depression in the foam (like 4" omnis do) but still it seemed lower than expected.

As expected, 2.75" and 4" omnis performed very well intrack and had almost no resistance whatsoever in the crosstrack direction. 3.25" posted slightly different numbers, which could be due to the different roller size and material.

Mecanum wheels have what appears almost the same material as 4" omnis on their rollers, and you would expect them to get about 1.3/sqrt(2) => ~0.92 (see previous post), but they had 0.85 at best, likely due to the larger and more rounded roller geometry.

Another important observation was that Mecanum base was very sensitive to the direction in which you push or pull it. Even few degrees off center line would cause two of the rollers to start rolling and entire base would slide diagonally to the side with only two other locked wheels (with rollers perpendicular to the base movement) resisting the pulling force.

This makes sense when you look at the below diagram that shows that only two motors are necessary to power diagonal movement, while two other wheels’ rollers just freely rotate: 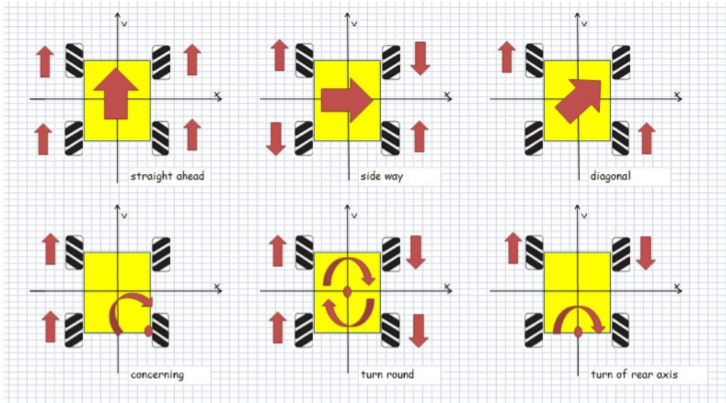 If those diagonal wheels (that maintain traction) only support half of the robot’s weight, then the total traction force is also going to be proportionally reduced.

Similarly, if you use a pair of traction wheels (or omnis with rollers locked by the screws) to resist being pushed to the side, then they are only going to be as effective as the amount of weight riding on them.

It might be tempting to build a drop-center base to concentrate most of the robot’s weight on the traction wheels, but then you may have the robot rocking while accelerating, making it harder to write predictable autonomous code.

For playing defense or counter-defense you want to have high CoF, such that you could “convert” smallest possible robot weight into largest possible pushing or resisting force. For example, 15 lb robot on 4" omni wheels could generate 19.5 traction in respect to the ground which is just slightly more than max 18 in*lbf force generated by 4 V5 motors with 200 rpm cartridges at 2" radius.

Mecanums have very similar roller material as omnis, but they lose a portion of their ground traction (force) when wheel pairs “fight” each other rather than apply all of it towards pushing force in forward direction, like 4" omnis do (read previous post).

12 Likes
Swerve Drives, Omni Wheels, X Drives, and a plea to stop trolling
Turning With Mecanum Wheels
Wiki
Is there a way to improve the 3.25 inch omnis' grip on the platform?
VEX EDR Cortex tutorials
What is the objective best drivetrain for Change Up
Can we replace a heavy steel chassis with a lighter aluminum spaceframe (or better, a monocoque), and how?
Free spinning middle traction wheel?
Wiki
Tipping Point Design Concept - 2 Mogos in Under 1 Second
Mecanum wheels and Crawling over rings
Geared 4 motor drivetrain
What is a good robot weight
Why Do people put omni wheels in the front and back but in the middle something else if they do not want to much drag?
Robot weight requirement
Wiki
Vexcode Mecanum Wheel Program
Programming help!1
Preventing Pushing
fantomexrobotics March 9, 2019, 7:57pm #14

Pros and Cons of Mecanums

When we used mecanums, we didn’t experience any slowdowns vs omnis (at least a perceivable one).

When we used mecanums, we didn’t experience any slowdowns vs omnis (at least a perceivable one).

Mecanums will move forward with the max speed of the motors, the same way robot would do with omni wheels in the tank configuration.

However, max speed that motors could give you with mecanums will be slightly slower, because the motors will need to counteract friction force of the wheels pushing onto the robot frame along the axles (see force vector diagrams few posts above).

That extra friction is not present in case of the omni tank drive. With good build quality you could reduce that force to minimum, but it will always be there.

As people have said before, in case of mecanums you get sideways mobility and resistance to being pushed (crosstrack), and you pay for it by slightly increased power losses to friction, and by the lower traction and lower maximum pushing force along forward-backward (intrack) direction compared to omnis.

With omnis you get best intrack traction per pound of your robot weight but resistance to crosstrack pushing is almost non-existant.