So I was thinking and I came up with a potential strategy that I think would be easier to coach and still be effective. Basically the idea is that you would keep the towers completely neutral, descoring them whenever anyone places anything in them, while winning the battle by stacking more cubes. Thoughts?

This is actually a good idea, and if you can descore cubes (which, quite frankly, is pretty hard this year, w/ only 1.5 inches of cube sticking out of the tower) fast enough, you can get pretty OP alliances, just for doing this.

I mean 1.5 by 5.5 leaves 8.25 sqr inches of grip are so it really shouldn’t be that hard to descore. Most simple claws that can reach high enough could probably descore, though descoring and then rescoring could be a large time allocation that may not always be worth it.

I think it could be a winning stategy as if you have auto bonus and 10 of each cube color you automatically win or tie.

My head hurts any time I try to think strategy for this game. the only thing I ever get to is just trying to stack the colors the opposing alliance isn’t, then put those color cubes in towers, but that strategy seems to easy to counter.

BTW, I open to game strats, (I need some)

I mean, sure but that strategy relies heavily on you being better than your opponents

I did some simple calculations when the game first came out. It might seem unrealistic by now, but I still think if our robot can stack faster than our opponent’s robot it’s okay to keep the towers neutral. 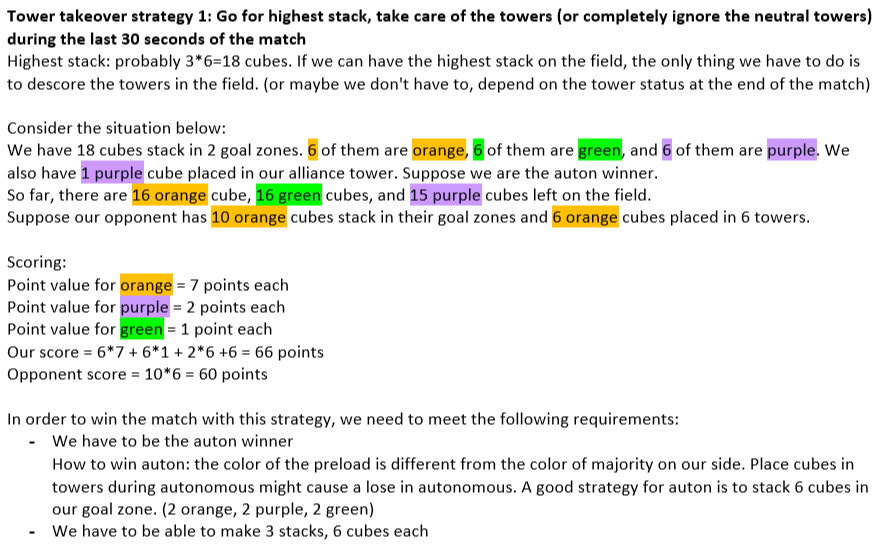 One strategy my team thought of was to start stacking cubes that the opposing alliance is placing in the towers. If they start putting orange cubes in the towers, start stacking orange cubes. That way you also benefit from the cubes that are in the tower and don’t have to waste time placing/descoring cubes in the tower. As long as you get more of that colour cube in a stack than the opposing alliance, you will most likely win. You might also need to stack a few extra cubes of other colours just to give you a few points to ensure a win.

Remember that the more cubes are in the tower, the more SP’s you will get for cubes that color.

The only problem with putting more cubes in towers is if your opponents have more cubes of those colors than you do.

Edit: I guess a similar idea would be to make sure the number of cubes in each tower are equal, or that you have one more of the color you scored the most of. Then if you have more cubes overall, you win, and if you have fewer cubes, you would have lost anyway (other than the time difference caused by putting cubes in towers instead of defending them), but you get more SP’s either way.

You could also let the other team score cubes in towers, and only make changes when the tower cubes matched a color they had more of than you.

Playing for SPs in this game seems pretty risky - will be interesting to see how that plays out.

Your opponent would score 70 points, because they also get 7 points per orange cube.

You are right. Then descore is necessary.

You can use this calculator to visualize scoring.

I find the towers to be useless, as regardless of what you score into them it will also benefit the opponents too. There is around the same number of the same color of cubes on both sides of the field. So unless someone is counting besides you and making up a plan of tower scoring, it would be best to avoid scoring in the towers as a whole and simply go for sheer dominance of cube stacking.

I would counter that if your bot can grab the stacks then you get more of a specific color, thus especially in auton, you can strategize the towers

Also, it is extremely easy to descore the cubes. Simply ramming into the poles will cause them to fall out.

Simply ramming into the poles will cause them to fall out.

are you sure of this? based on images from the game manual this should not be the case.