So two questions:
We only have room to crossbrace our top four bar on the DR4B and were wondering whether it would really be necessary? Our DR4B seems sturdy enough for now.
Is there a big difference when using pulleys with the rubberbands? I’ve heard it helps even the tension across each section of the rubber band triangle. Right now we are just using spacers that can roll but not wiggle around.

Bracing on the bottom 4 bar can really increase the stability of the lift, but it really depends on how much strength you need with it and how long the bars are. For example i dont think that 5225A had any bottom 4 bar bracing in ITZ but their lift was very light with short bars and (obviously) they were only lifting a single cone.

As long as the rubber band holders on the triangle can rotate fairly easily you are fine using anything.

How would you brace on the bottom 4 bar though? When the DR4B is collapsed won’t the top 4 bar intersect with the area between the bottom one? I was also planning on trying to use an x crossbrace because I’ve seen on the forum that just bolting a c-channel across doesn’t do as much but I’m not sure if that’s actually true or not. Whenever I’ve done it it doesn’t seem to do that much.
We are using 30 hole long c channels that aren’t halved but our rubber bands seem to hold it up pretty well so I was just wondering.

Here are some pictures of our robot. With the DR4B in the stored position, do you think we’ll be able to fit a functioning x brace on the bottom? 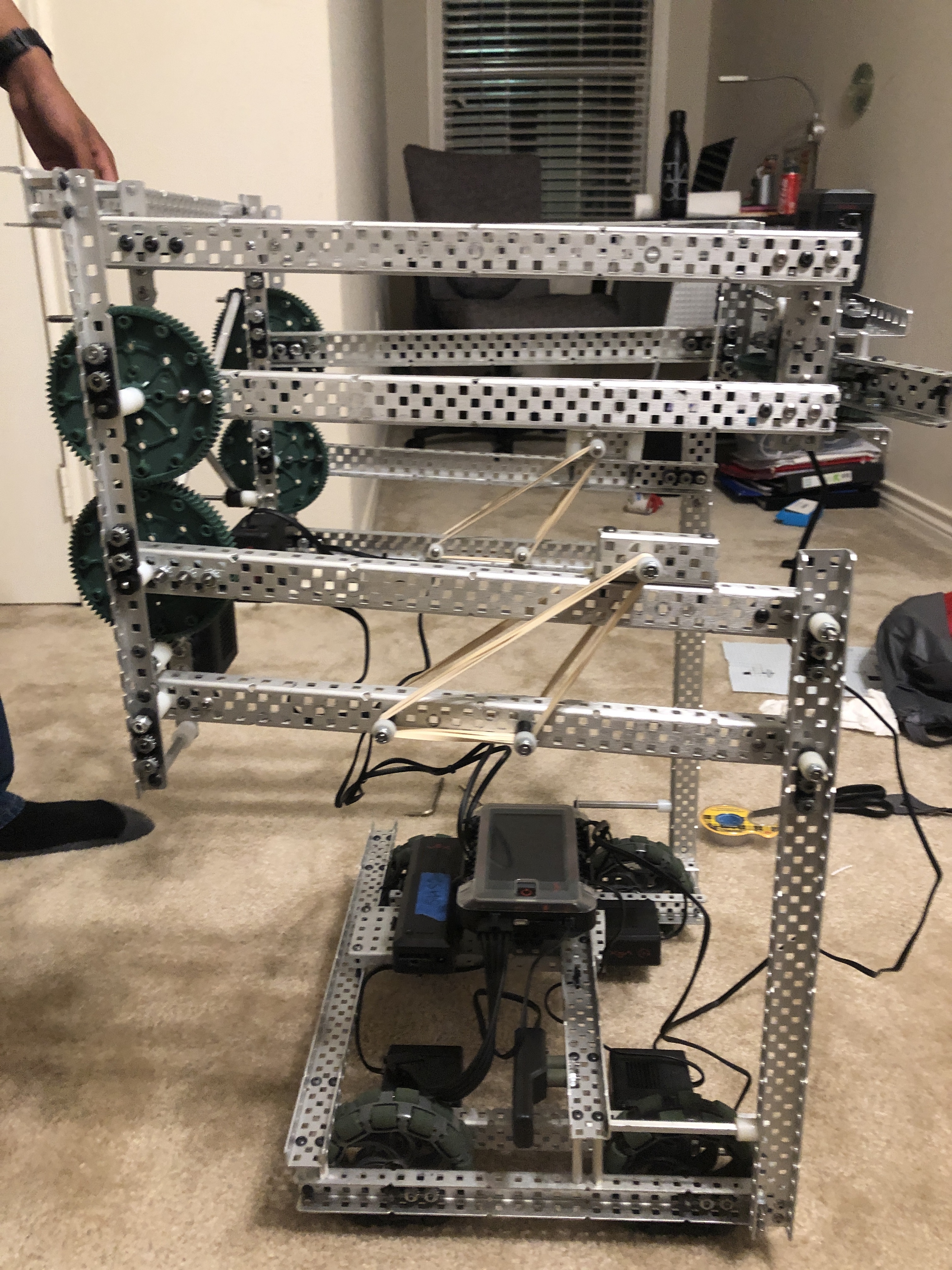 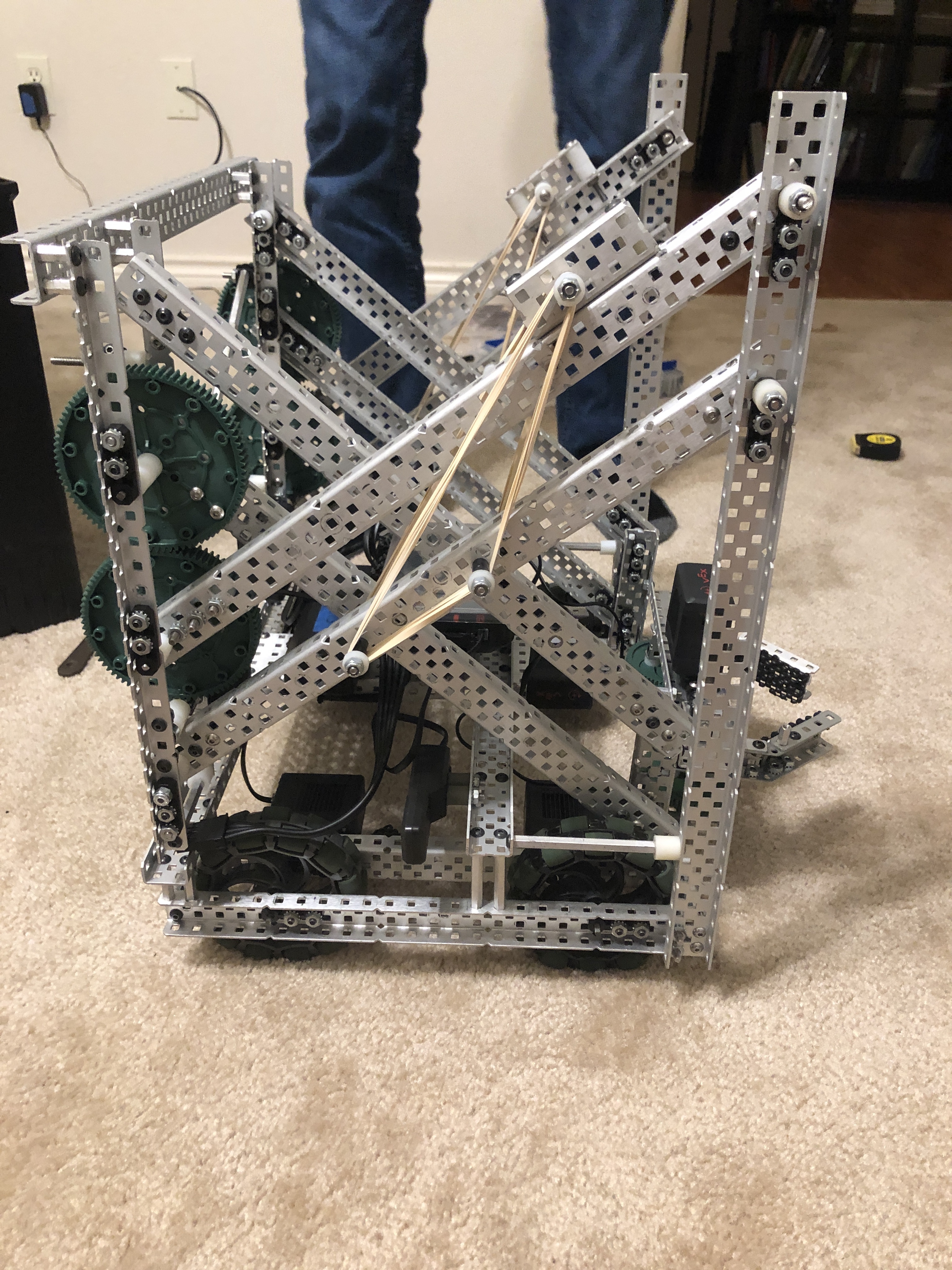 If you look at some past smaller dr4b designs you can get a pretty good feel for how to brace the bottom bars. The two main ways that i have seen are having a c channel across perpendicular with 2 bars coming off of it to create triangles or a big X made with 2 c channels or standoffs.

Ill link a few examples of these types of bracing:

you should be able to incoorperate somthing similar to one of these into your robot pretty easily.

Hm yea I think I have an idea of something I can do now thanks.
Also, since we’re thinking of carrying multiple cubes at once on our DR4B, should we put extra rubber bands so that when the motors r disengaged it’ll creep upward. Right now we have it so that when the motors are disengaged it’ll stay in place. I’m just afraid that by adding cubes we’re gonna have to use PID to keep them off the ground and I don’t know how reliable the V5 motors are. (We’ve already broken one RIP)

The big issue with that is legally passing inspection with the lift wanting to raise, i’d recommend putting on as many as you can before it starts to lift by itself or use some sort of 1 time release to keep it down before matches and for inspection if you choose to overband it.

Based off uses during TP, the pain the drive motors and some launcher motors went through make me think they will be fine for something like this though.

Like @Zach_929U said, the V5 motors are surprisingly tough. The vibration many teams had on catapults were amazing, but still they didn’t break. I don’t think that you’ll have a problem this year.

That’s true. By the way, do any of y’all know how to fix gears that warp on the DR4B? It’s mainly our high strength 84 tooth gears.

What do you mean warping? Are they literally bending? Can you post a picture?

I could be wrong, but it appears you have your gears rotating around shafts. The problem with shafts is they are not very sturdy and can wobble around a lot even through bearings, which could be why it looks like your gears are bending slightly. Instead of using shafts, use a screw that is locked to the mid-section with a keps nut, and plastic inserts for your gears. If your mid-section is 6+ holes wide (which it appears to be), you will find that Vex doesn’t make screws long enough to go through both structural bars. Use a nylock and a teflon washer to keep the gear in place, leaving some length of screw sticking out. Don’t tighten the nylock too much or you will create unnecessary friction. Use a standoff to connect the remaining length of the screw to the other side of the mid-section so that it won’t be able to bend. That should eliminate any problems you experience with the gears.

Here are some pictures: 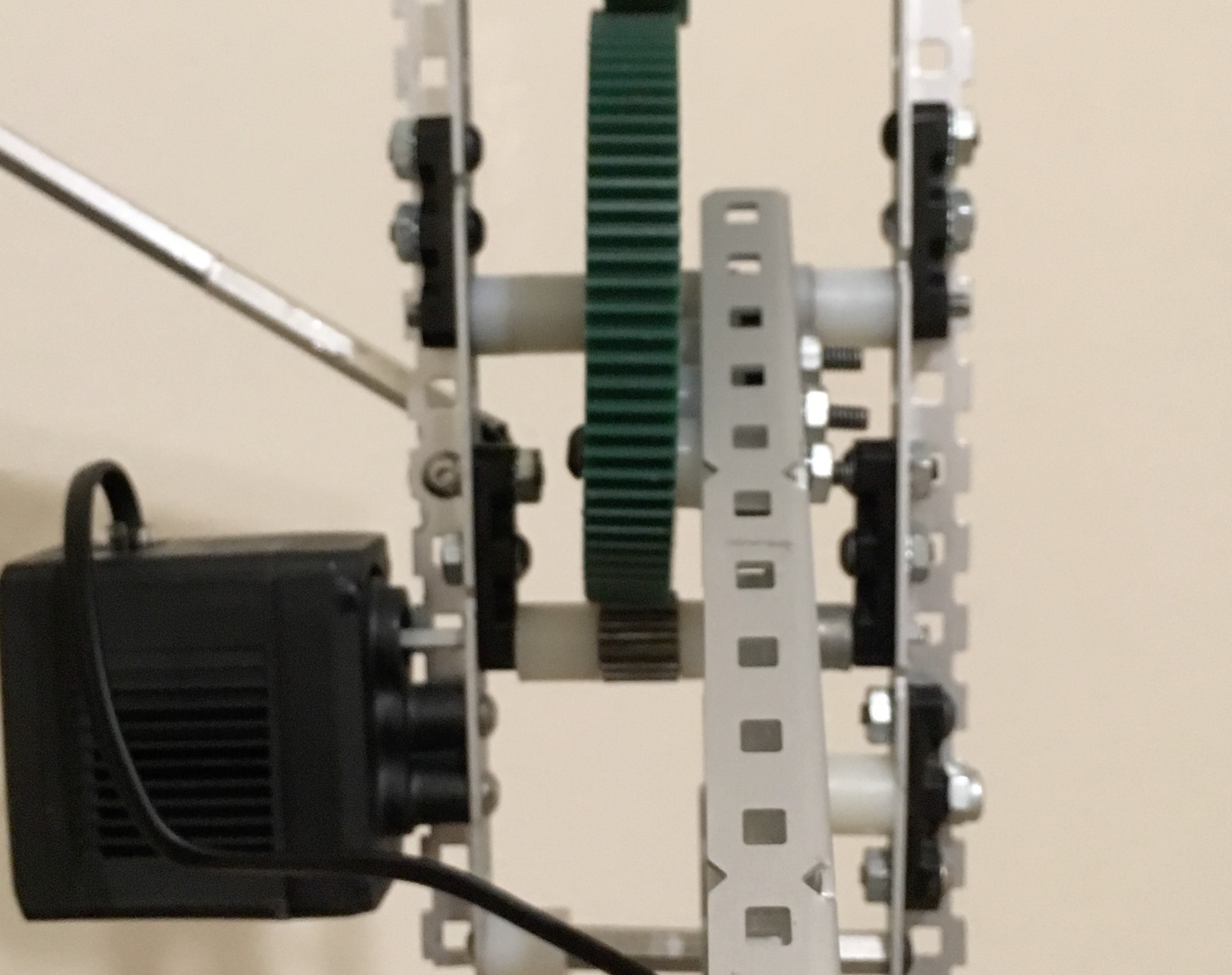 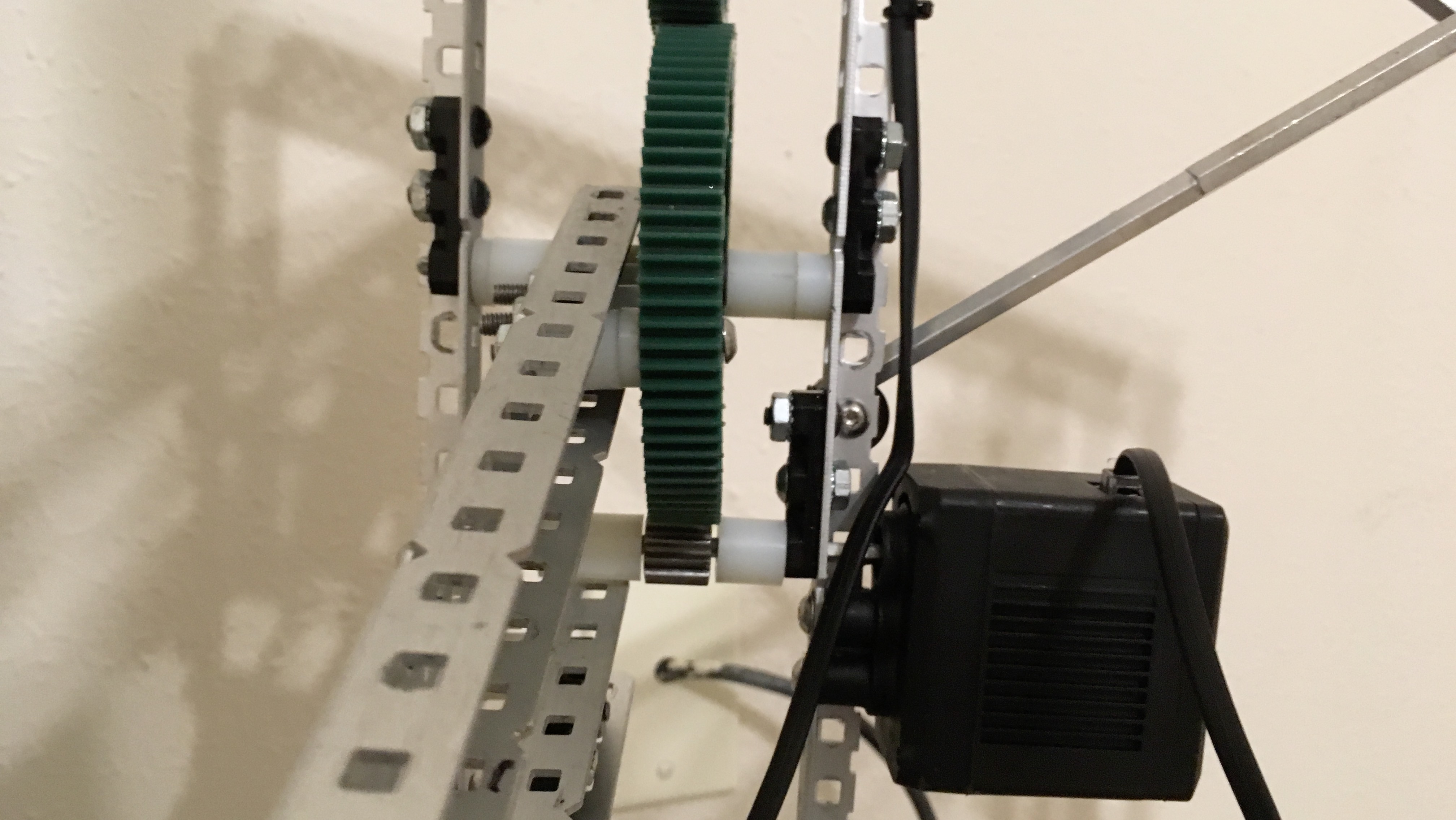 They don’t show it that well but the actual gears themselves are bending which is a slight problem.

Huh that actually sounds pretty good. Yeah our spacing is 7 holes so a normal screw won’t go all the way through. I think we should be able to make the spacing one less but I’m not sure if it’s worth it?

Make sure your spacing is as tight as possible without making metal rub against metal. Also I see that there is a small amount of space between your gears and the lifting bars as opposed to having the lifting bars resting right against the gear. Get the gear as close as you can to the lifting bars for a little extra support.

Surprisingly your shafts have not bent yet, but with a length like that you would definitely experience this in the future. Last year in TP we managed to get fit two lifting bars with gears in a 4 hole wide space and still had problems with shafts bending. You could either replace the shafts with HS shafts to prevent this even further, or do something like 1814D did in TP with their cap bot.

The reason we put the bars a little away from the gears is so that we would have spacing for rubber bands on both sides of the bar and so that if the DR4B flexes a little bit when going up or down the 4 bars won’t interfere with each other. We’ll see if putting them flush with the gear will work though.

I think I’m gonna change the axles on the driven gears to screws but any advice on the drive gear? The only thing that it seems we can do it switch to high strength axles if we don’t want the axles to bend.

I would recommend doing what Technik3k showed in the thread about partially threaded screws. We tried this design and it worked very well. If I remember correctly it was about 5.5 holes wide so you only needed one screw. As for the drive gear, you can sandwich it like Technik3k did as well, and you shouldn’t have to worry about it bending. I would recommend doing this whole setup wit 84 tooth gears however, since you will be lifting large loads in this game.

It is a well known “secret” among the veteran VRC teams that it is best to use single bearing screw joints when building 4B, 6B or DR4B/6B lifts.

With them you can achieve minimum slop, which translates into more stable lift that could go higher with more precision and less wobble. 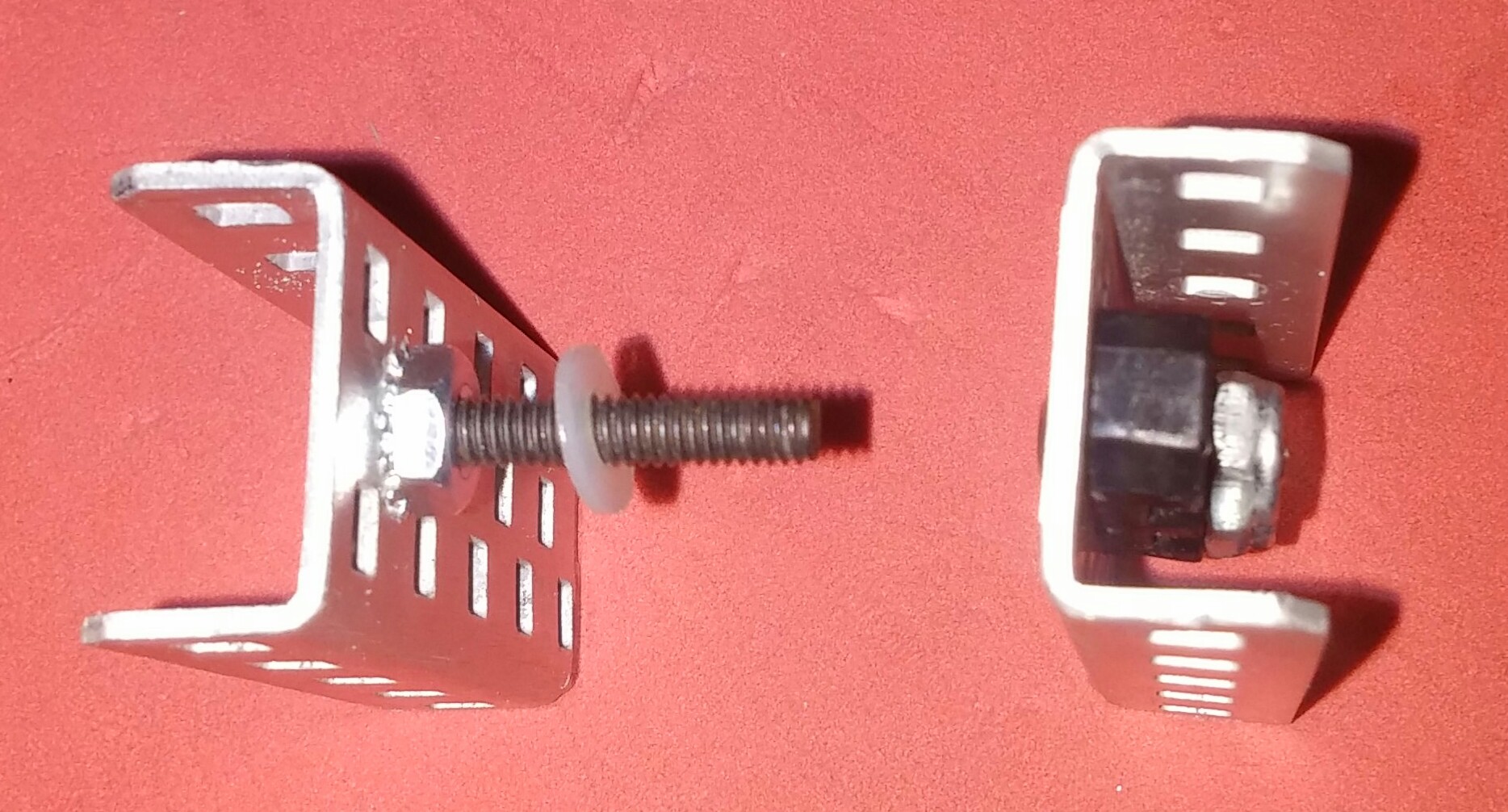 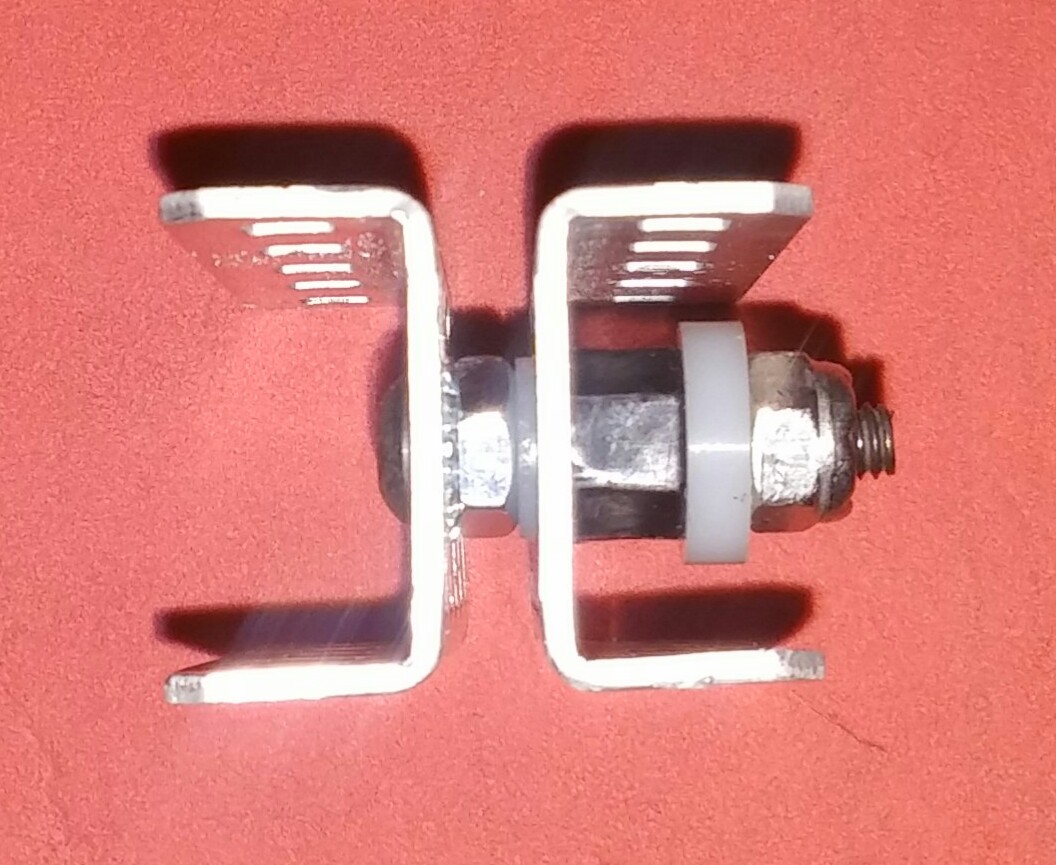 When assembled correctly nylock nut is tightened almost all the way, but not fully such that you could still rotate the white spacer with your fingers.

To reduce slop and increase precision further you can use longer (2") screws. Below is a picture of the 2" screw tower connection for DR4B: 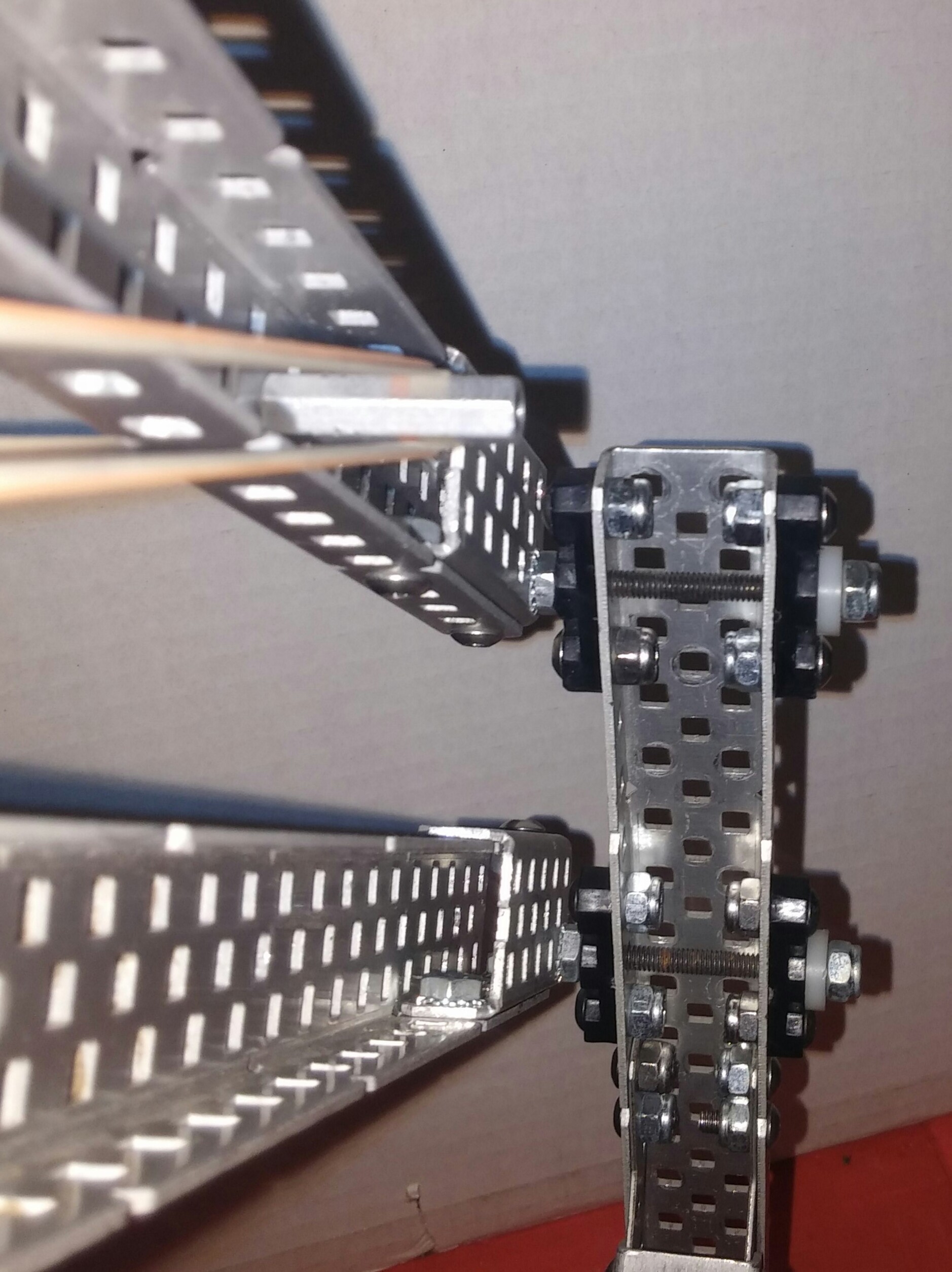 However, you have to be careful and need to regularly check those screws, because if they get bent you will end up with more friction losses than benefits.

Similarly, to reduce wobble you could increase the width of the arm/gear assembly in the mid-section. Here,1.5" screws hold an extra bearing on 3/8" nylon spacers (note that spacers are slightly rounded with a grinder wheel to fit the shape of the newer 60T gears): 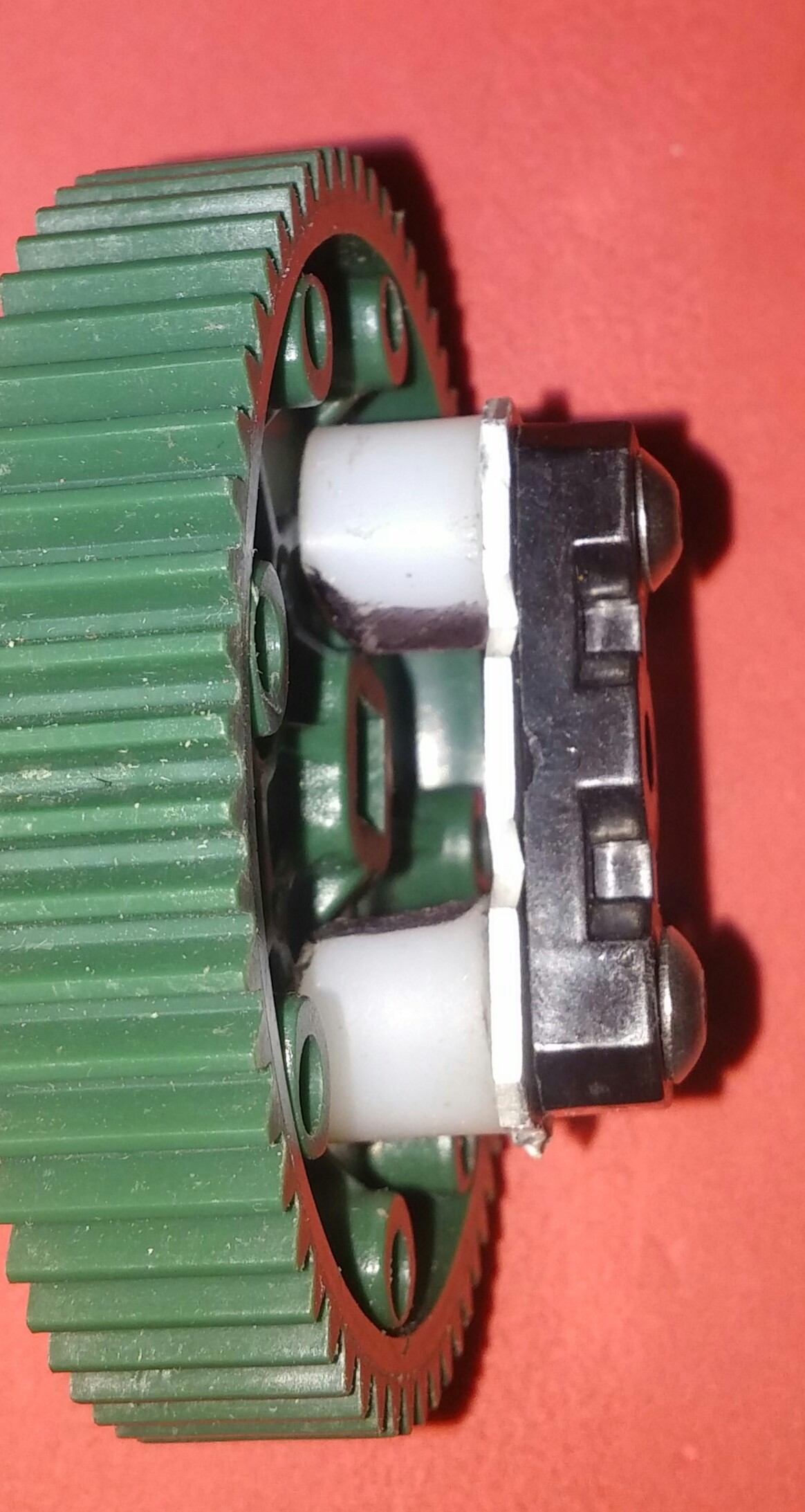 On the other side of the gear keps nuts are used for better overall stability: 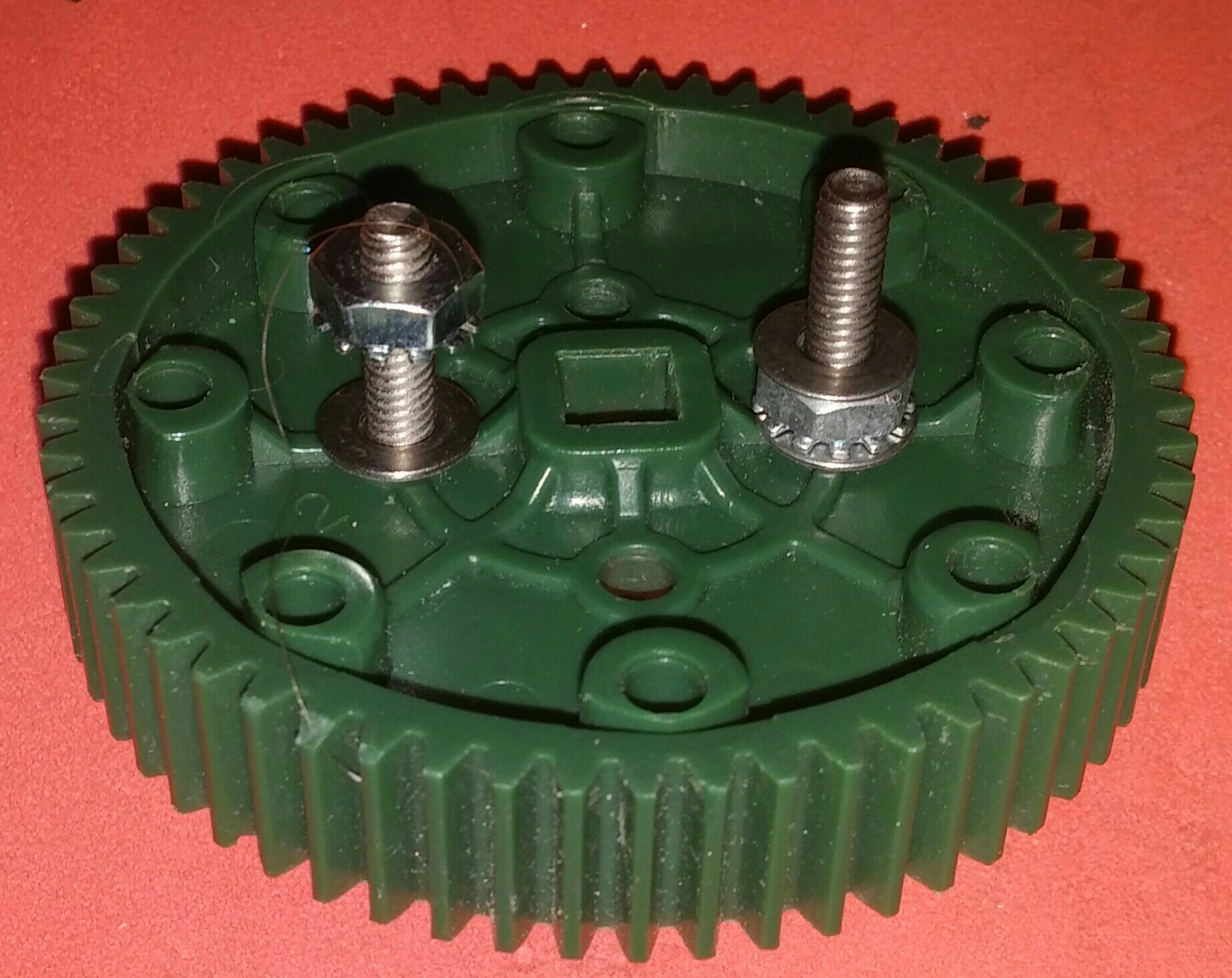 Washers are added under and over the keps nuts to get the perfect distance where c-channel is almost touching the gear. 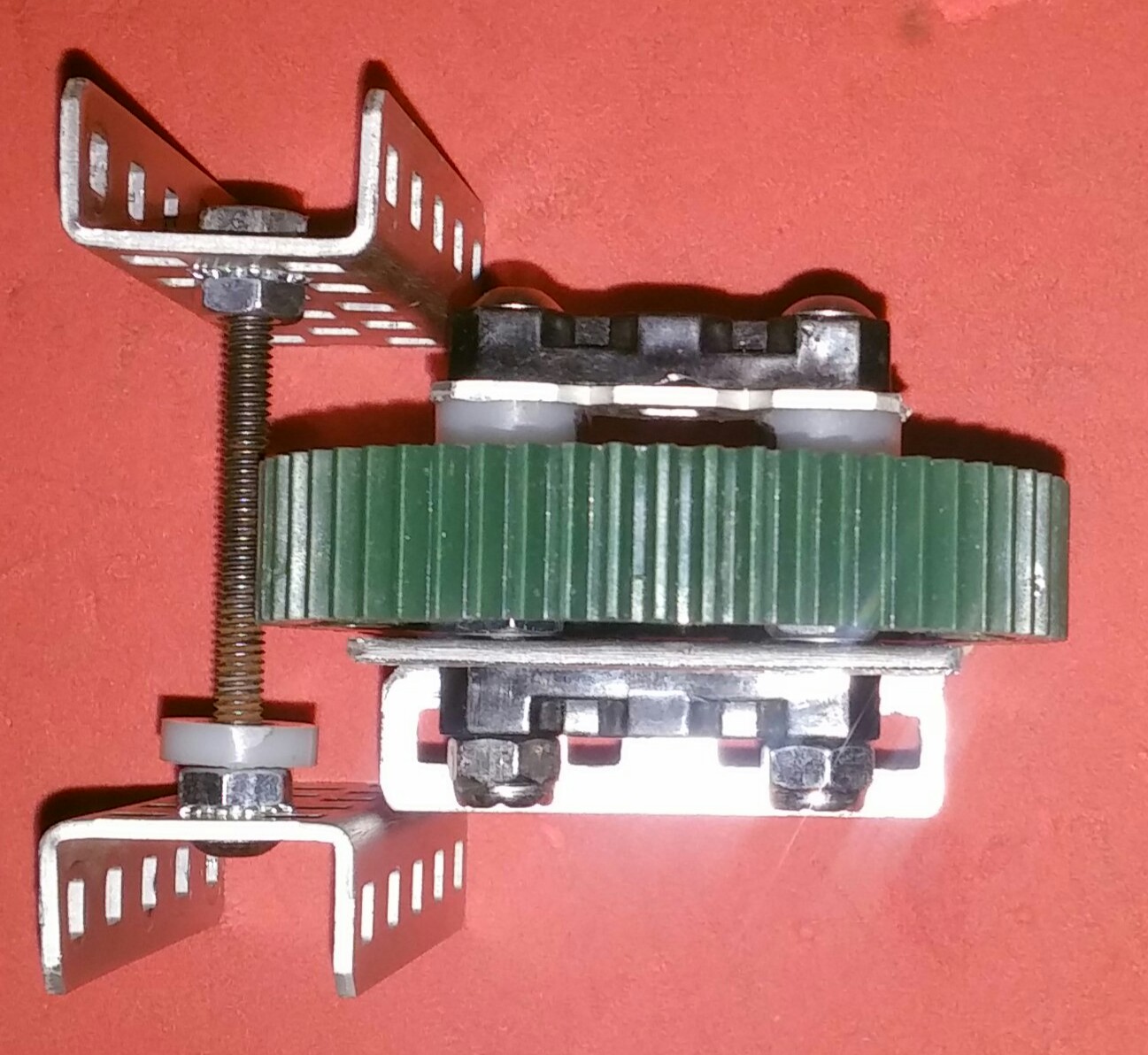 This fits perfectly with 2" screw that acts both as a gear axle and rigidly connects both sides of the DR4B mid-section. Same as with the tower connection you need to tighten the nuts such that there is no visible slop, but not too tight, to avoid any unnecessary friction. After the final assembly you can use a small ziptie to add some white lithium grease lubricant under the bearings and onto the gears.

As you can see on the side view there is no need for any additional connecting hardware. Four 2" screws used as axles also connect the sides of the mid-section.

Hm I think it’ll be kinda weird with a wider mid-section but with the standoff/screw method I think I can make it work.

If you’re using aluminum, then it’s really not that much weight for just a four bar. If you are using a 6 or 8 bar for your top linkage, you might want to consider it. We used an 8 bar for our top linkage and it works fine without the cut c-channels. It really depends on the weight of your intake and how many cubes you intend to hold at once. As for the half c-channels bending, I haven’t heard of that happening. Many teams used them ITZ and they worked fine. While it does seem that using half c-channels would decrease the lift’s structural integrity, I have seen no evidence to prove it. I don’t think it makes that much of a difference though so it’s not worth switching to them if you didn’t start using them.

It might just be the angle, but it looks like the two towers at not the same distance apart at the bottom and top. This would make it less stable, and it would cause the gap between the gear and spacer in the second picture to occur. Hope this helps!

Uh that would suck if it’s actually different because both towers are spaced the same. I hope the c-channels aren’t bending.

I’ve seen people use two high strength gears bolted together on their DR4Bs (for a total of 8 high strength gears) and was wondering if that is worth the extra weight it adds? Or would using screws and reducing the spacing in the midsection do essentially the same thing?

Or would using screws and reducing the spacing in the midsection do essentially the same thing?

This would do basically the same thing. Most of the teams that do that use axles, so having two gears would allow for less wobble. This isn’t really a problem if you use screw joints. Also, just in case, you might want to brace the two parts of the tower together.