Thanks, I use Inventor and I’ve only messed around with it for a few hours, would you suggest I use Fusion 360 instead?

I think rendering is much better in fusion 360 but animation is easier in inventor, so it depends what you want to do. The softwares are pretty similar, so you could probably learn in the environment that is most intuitive to you, and then figure out how to use the other environment for the specific area that software excels at. I started using fusion because it’s available for mac, but Inventor has more educational resources pertaining to vex. Version control and file structure on fusion is also super nice and makes collaboration easier, so if you’ve got a teammate also cadding, id recommend fusion.

A high strength axle that was “Mushroom headed” (Simply hammering down the end until it becomes wider than the original diameter) was then hammered into a metal High strength pinion.

It’s a crude solution but it was the only one that I could think of that was thin enough to fit within the side of a 6 tooth sprocket. It was very strong and never broke during over a month of use, scrimmages, and worlds.

Here is a picture: 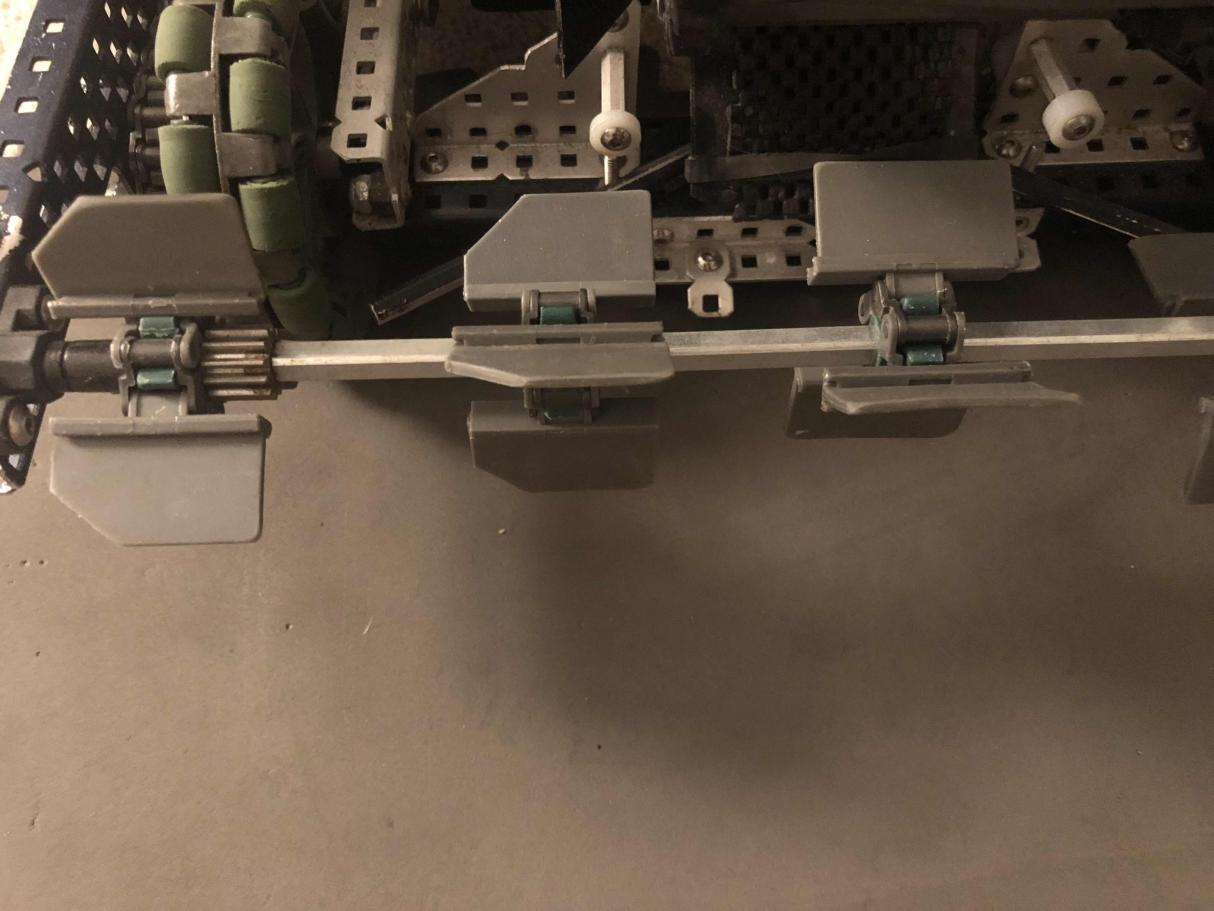 If you guys have any more specific questions about niche parts of these robots I can try my best to answer them.

Does that mean that the middle sprockets are free to slide?

No, For those I took pipe cutters and scuffed up the axle then hammered the sprockets over them. There was not space for collars.

It really is just personal preference. I use inventor because I don’t like the filing system on fusion. As a Mac user, I just boot off of an SSD for windows and then use it that way. I feel like inventor has an easier start for assemblies but you can do more in parts with Fusion. They’re both free for students and are both great programs. I always just recommend trying both and eventually you choose one. It’s also helpful to know both.

This might be considered slightly off topic, but I motion tracked some of my personal favorite robots inside my house https://youtu.be/Os-4zBV8_Zk

he uses fusion 360 for cad and render

Additional renders and the STEP file should be uploaded to drive

In the google drive

As promised, here are the CAD files (and probably less compressed versions of those renders). All the files will be going into this drive.

Some of us have used Inventor

Hey guys, After the RI3D was completed, Goofy was worked on all season. I’ve made a CAD of the most recent version of the robot and making it public! The robot was being worked on up until the cancellation of the World Championship. Its main use was as a scrimmage robot against other teams. Throughout the year, I was experimenting with what would make the robot more or less competitive. An example of this is that I slowed the rollers down to 100rpm to see if it was possible to be competiti…

How do you guys all have time for this with school work and other commitments. I mean I tried building a simple clawbot in the Robot Mesh Studio CAD and it took me a solid 30 minutes just to get like 10% of the drivetrain done. Also do you guys also have a recommended CAD software that is easy to use and free?

How do you guys all have time for this with school work and other commitments. I mean I tried building a simple clawbot in the Robot Mesh Studio CAD and it took me a solid 30 minutes just to get like 10% of the drivetrain done. Also do you guys also have a recommended CAD software that is easy to use and free?

The more practice you have the easier and more efficient you get. I would recommend Autodesk Fusion or Inventor for cad software.

The more practice you have

I started cadding my Tower Takeover robot from pictures last night at 6:30 and I finished it about an hour ago, including screws and nuts. With enough practice you can get really fast at cadding. I use Inventor.

Thanks for the suggestion