The rubber ratcheting piece is designed to be rotated as it wears to keep it fresh, but yes on a practice field in your shop I think you may wear it out over the season. I think it was brought up elsewhere, but there is also interference between the bolt head through the roller and the “pointers”.

This is probably a stupid question but, 2 motor 2 wheel or 2 motor 1 wheel?

as long as you don’t touch the low goal’s 2d plan, you can still expand up 2 inches, which could be used to hook onto one of the bars.

I am just curious, even though I’m not on a team anymore. My idea was that a bot could climb and hug the high goal until the last 10 seconds. If the expansion thing would be an issue, the bot would have a one-shot puncher mechanism on the bottom that makes it jump to reach the bars. Such a design might only require 2 drive motors, or even one, leaving the rest for climbing and endgame expansion. This definitely wouldn’t be a meta, but it’s these wacky designs that keep things interesting

Somebody please make this and PM me with how it turns out.

the bot would have a one-shot puncher mechanism on the bottom that makes it jump to reach the bars.

part b of SG5 makes me think that this is a no-go either way, since it has mentions of a ‘virtual ceiling’.

No, stop it, please.
Vertical expansion is limited to 24"
Bottom of high goal is 25"
There is no way to descore high goal
This idea is stupid
please stop im tired of seeing this

or instead of saying this in this fashion, say, “it is impossible by the standards set by the rules, blah blah blah 24 inch vertical blah blah blah bottom goal 25 inches” no idea is stupid. people just need to pay more attention to the rules.

the edit was just fixing a misspell 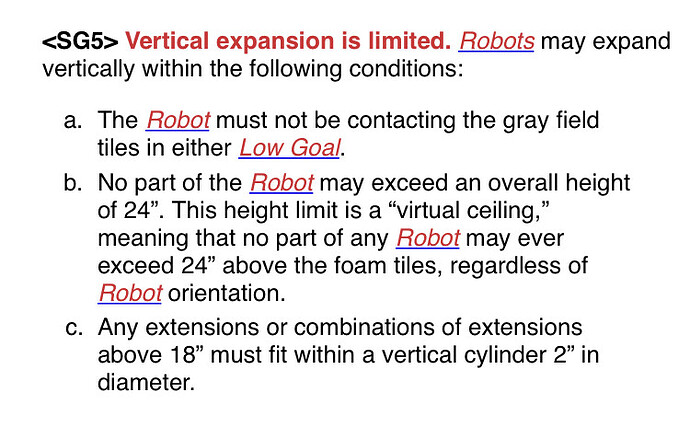 Might be hard without a turret though, and specifically one that can move up and down as well, so it could have proper velocity and angle. For a lot of flywheels it might not even work. I’ll put it in my Trello though see if in the future I can test it out later on

<G17> Use discs to play the game. Discs may not be used to accomplish actions that would be otherwise illegal if they were attempted by Robot mechanisms (e.g., interfering with an opponent’s Autonomous routine, per <SG8>).

Right, but what rule says you cannot de-score the high goal? It would be an SG rule… no SG rule says de-score is illegal. If unstated in the rules, it is allowed.

I’m just wondering if a flywheel will have enough power for that. Looking at the goals, it might take a lot of force. Plus, the chains? Overall I don’t think descoring could happen this game

I think it’s very possible that you would self descore this game. What I mean is that you might have a disc very close too falling out if your goal is overfilled and then accidentally hit the goal and the disc would fall out.

The goals are very flimsy if the goal is full enough I think it could be done and very worth it since every disc descored would be a difference of 6pts.

the motor, quite frankly, should be 2 motors no matter what, or the rev up time between shots will be between 1-2 seconds, which would put you in a not so competitive state in the higher levels, as it would take you 4-6 seconds to unload 3 discs into the high goal. the spinning thing should be ratcheted or chained to the intake, and in certain designs, putting 2 on the intake/roller would be optimal.