Does anyone have any data on the V5 motor’s position, velocity, and acceleration functions?
Is there a model of the motor’s pos, vel, and acel?
Do V5 motors have constant acceleration or does it fluctuate when going from 0 to 100 pct?
Is the position function of the V5 motor concave down, up, both, does it have an inflection point?

I want to find the optimal method of acceleration that reduces the sudden jerk on the robot when there is a sudden jump in acceleration or deceleration.

@prathusa, that is a good question.

In general, acceleration depends on the mass of the robot (that will resist acceleration) and the force (torque) produced by the motors which, in turn, is proportional to the electric current going through the motors. 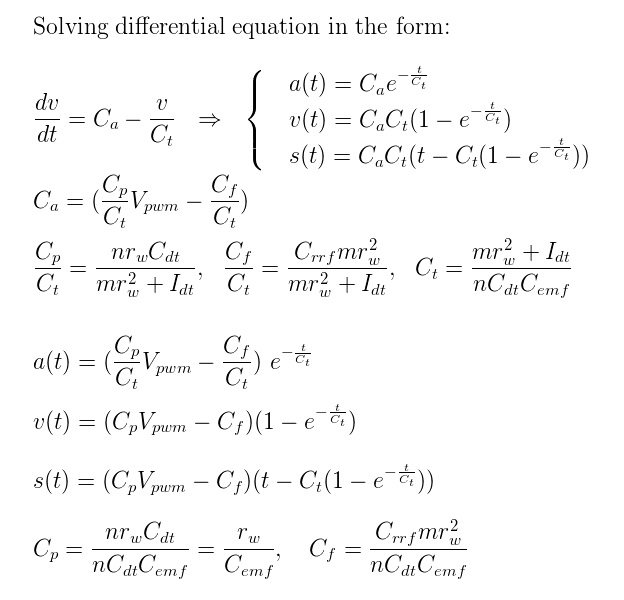 Resulting graph for velocity and position (as an exponential function of time) will look like this: 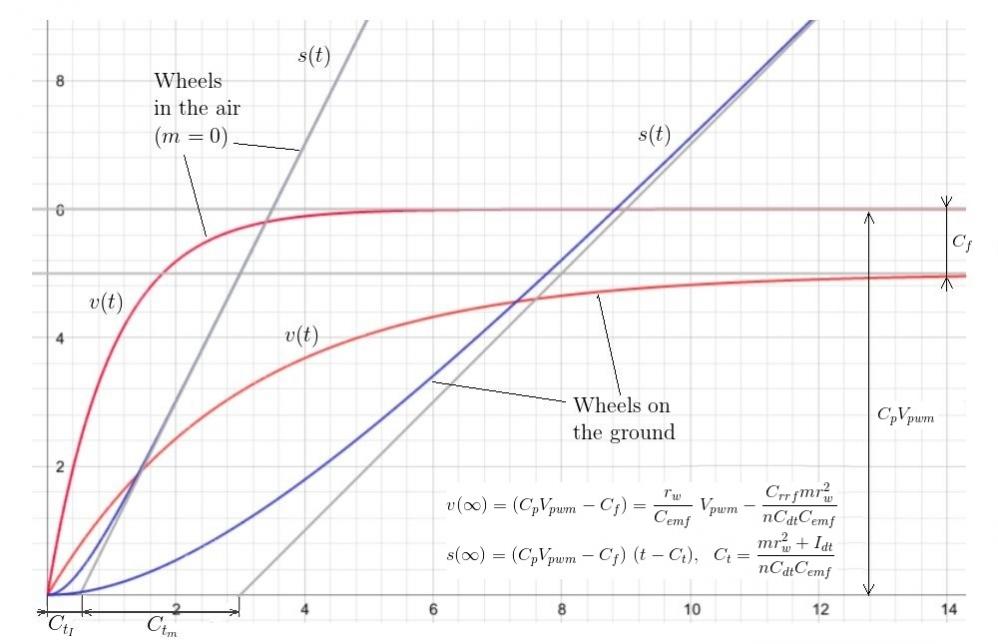 Cf is the coefficient which describes the friction losses in the drivetrain of the robot.

Cp is the coefficient which describes how voltage commanded to the motors translates into idle velocity.

Ct is the coefficient describing the ratio between acceleration resistance due to the robot mass + drivetrain moment of inertia and total power available from the motors.

The larger Ct is - the slower the robot will accelerate.

These are general formulas that are applicable to any electric motor. The shape of the curves for V5 may be affected by the firmware control algorithms that limit max current and power going to the motors.

However, if V5 motors are operating below firmware limits, then you can expect their curves to be described by the graph above.

I was wondering, in the real world, how we can control the motor’s acceleration as well. (in VEXCode)

Searching the threads the best I saw (most linked to old forum) was a simple loop like:

I’m sure my syntax is lacking but hope you got the idea. While this sounds simple-enough for accelerating, not quite sure how to decelerate…

Here’s hoping our expert programmers chime in (like our illustrious @jpearman ?)

One way would be to limit the current available to the motor, which would limit F in the A = F/M equation, thus limiting A (acceleration). The main issue is that this would be difficult to translate to a proper m/(sec)^2 acceleration value.

For constant deceleration I figured you can start from your max speed initialMotorSpeed and do -1*(iteration) + initialMotorSpeed;, giving your velocity line a negative slope. Here’s an example:

Keep in mind that this uses time rather than the more accurate unit of measurement, rotations, for duration of deceleration.

Thanks - this is much better than what I was working on!

Would this be possible to run concurrent accel / decel ramps on left and right motors?