Alright… This will be by far one of the coolest projects I have had in mind for a while. 2 days ago, I decided that I would like to make a multiplayer online simulation of Tower Takeover, in which people can select from pre-made robots (Maybe even customize the mechanisms, the motor distribution, weight, etc) and compete with it. I have plans for PC support and controller support as well. Currently, I made the field, ambient, and background of the game and next I would need to create the robots. I plan to get the “robots” scripted and apply physics to them as well, which will be the tough part about making this game. I plan, as a basis, for there to be different types of robots that I will be building for the game:
Wallbots
Cube Scoring Bot (Disco Style)
Cube Scoring Robot (Expandable magazine style similar to the concept of another forum post)
(and hopefully) Tether bot
Here are some screenshots of the game in development: 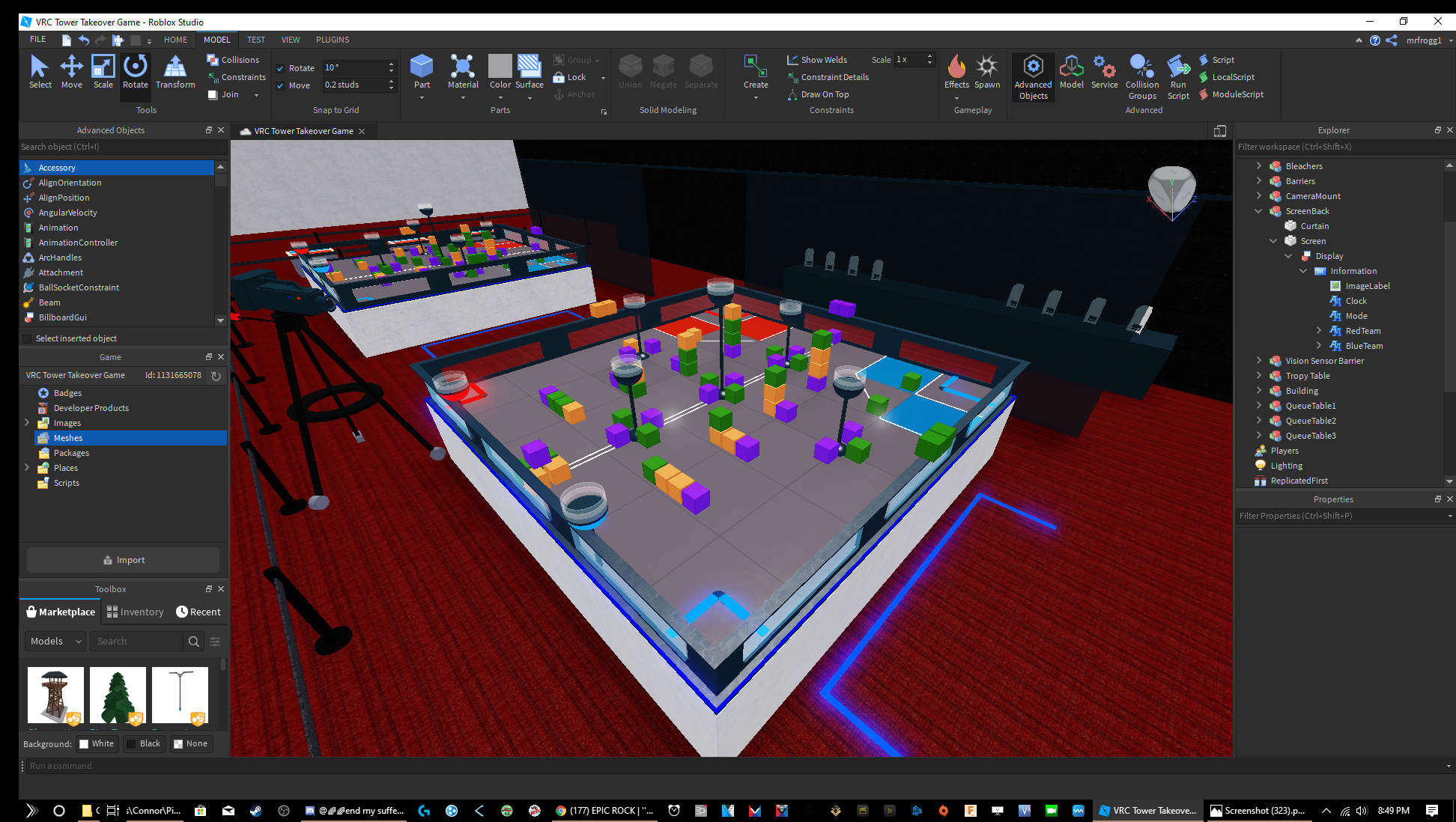 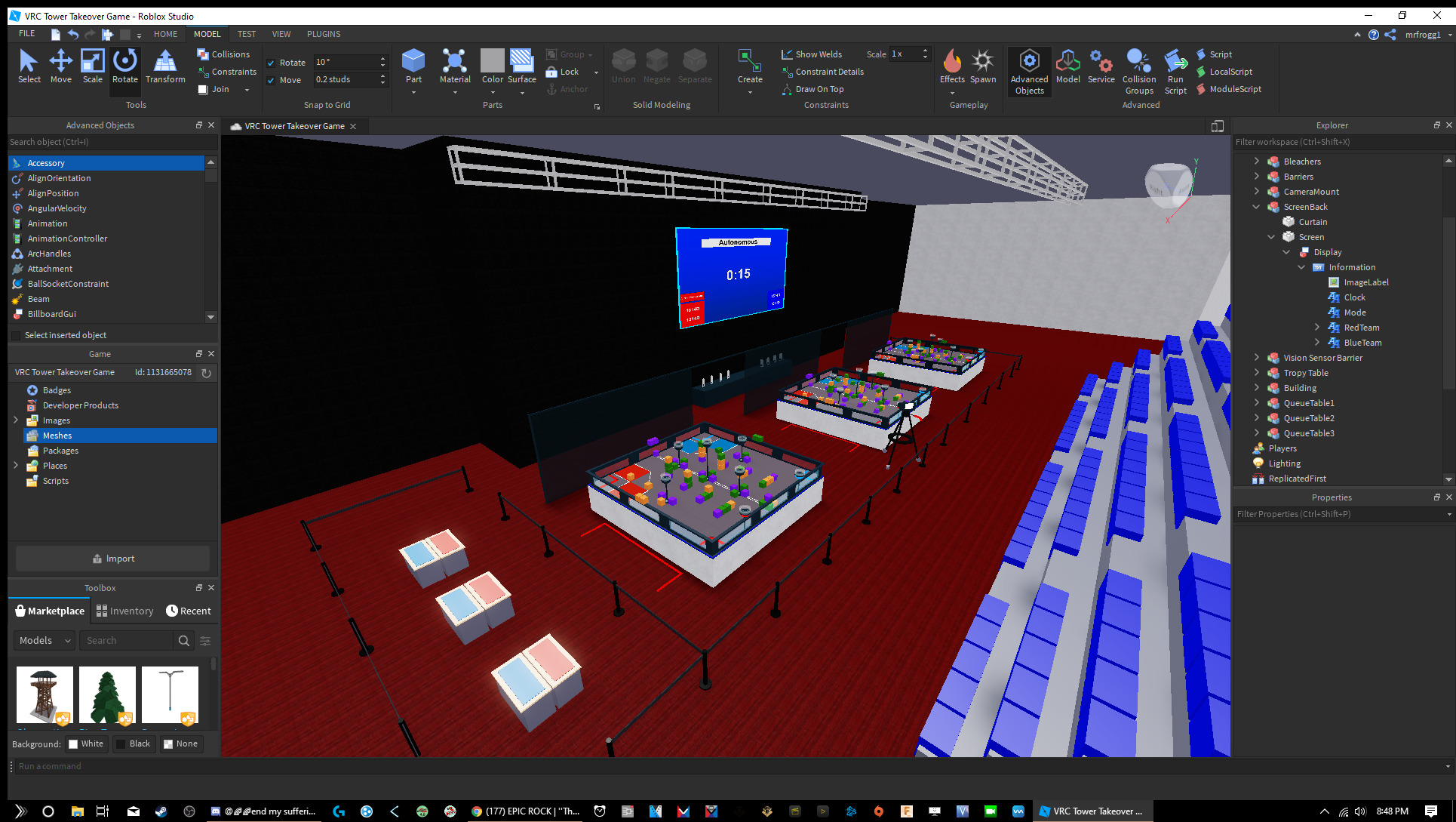 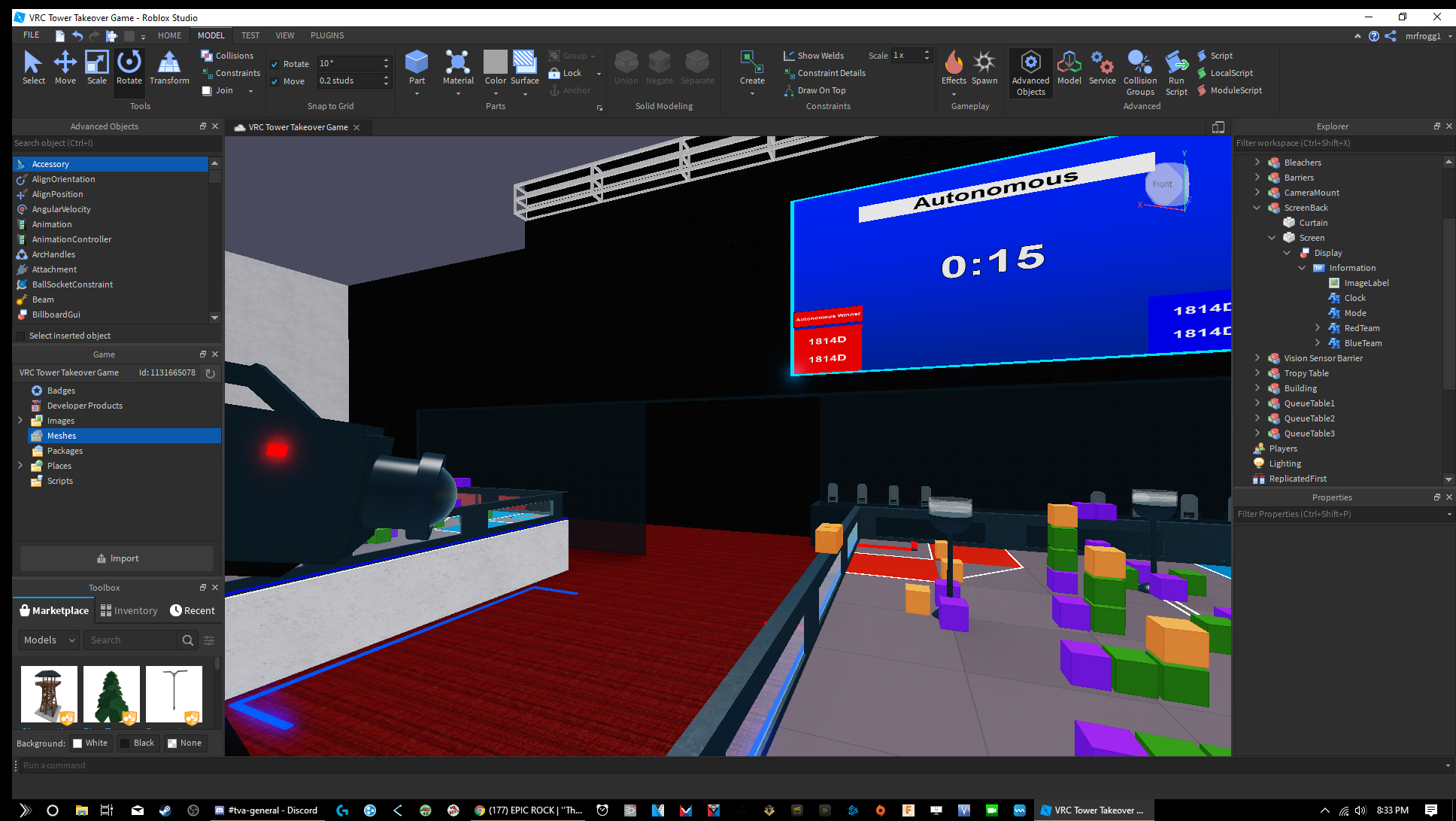 I have a long way to go, such as have hitboxes and interactive elements of the game. I also need to code a system that would automatically notice rule violations as well. I plan to try finishing the game, but if I don’t then most likely it is because I am too busy doing other things. I think it would be a cool idea for teams, who do not have their robot with them, to be able to practice driving in a virtual world against other players. This will allow you to get better and get a more solid understanding of the game rules as well, as I will also plan for there to be explanations as to why a rule is broken if you do break a rule in the game.
Hopefully this would be a project worth-while, and if anyone has any thoughts or opinions it would be very nice to hear

Ok, now this is epic

Holy cow, that still is amazing.

I also need to code a system that would automatically notice rule violations as well.

Maybe try to somehow link it with Discord to enforce < G1>

I don’t think G1 would actually apply to a mock competiton, G1 states that it has to be a VEX Robotics Competiton event. I don’t think ROBLOX counts.

Really cool idea though Connor, I would totally code our robot in if you wanted it. Well, once we have one that we can leak.

Of course I know that It’s kinda a joke. Of all the people I’d think you would get a Taran G1 joke.

Super cool idea, I love it. Please link the game once it is done.

Ok so this is epic but how will autonomous work?

This is a great idea, really ambitious project!

I am thinking either allowing you to program one or select from a group of autons.

This might be hard to add in, but becuase you are going for closest to compitision are you going to make it so the robot sometimes fails in autonomous and othertimes is scores all point it was programmed to?

Good luck! This seems like it would be great.

Ah, yes. I was planning on having robot durability for the match and have a slider bar in autonomous

hey connor, I have a question:

Congratulations on your initiative this is very important for the whole community.
Currently we have a good system with the virtual software made available by Robomatter RVW, the problem found in the system is the limitation in reaction to robots that can not be added to the platform only the standardized system.

If one day we have a system available that allows the users of the platform to execute the exchange of robots according to the model built by the team in .STEP .IGES .f3d will be incredible!

Have a good job in case you need some model of robot in cad to test I have models available!

Just for an update. I got the first robot done, which will be used for testing and scripting. This robot is inspired by @Codec 's design. 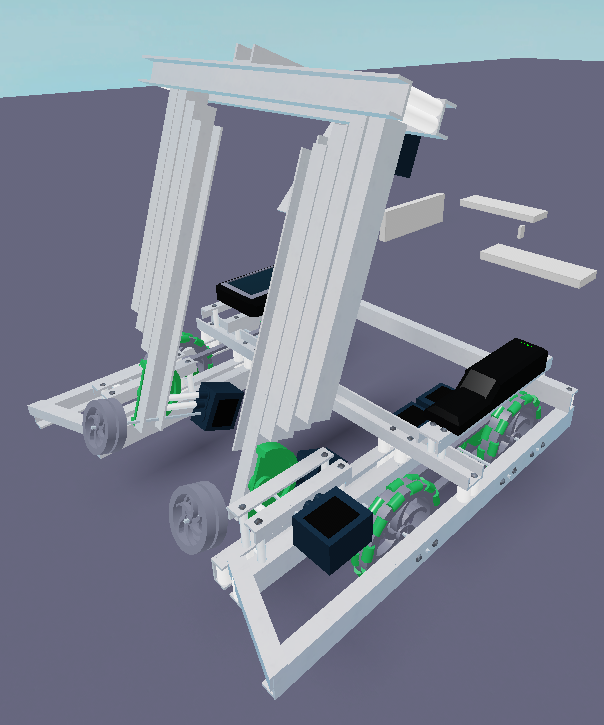 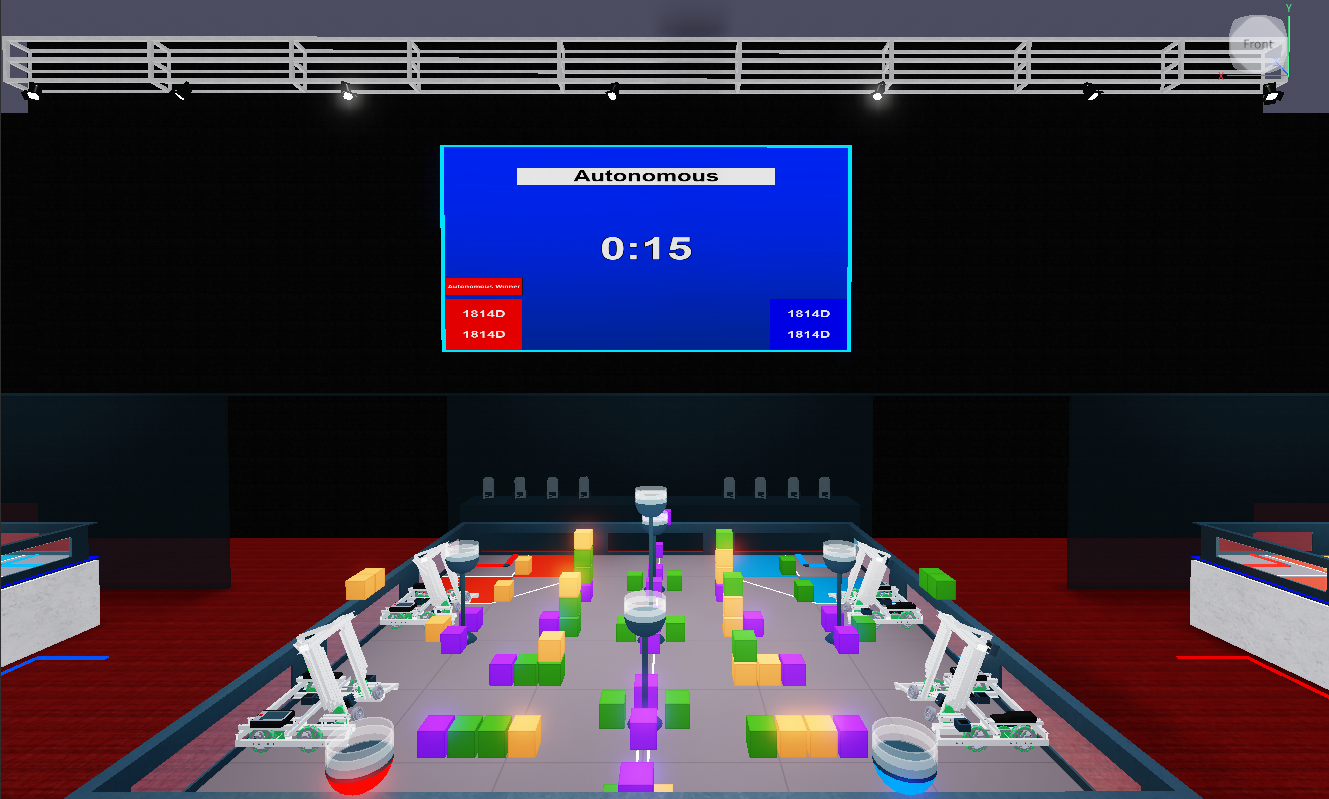 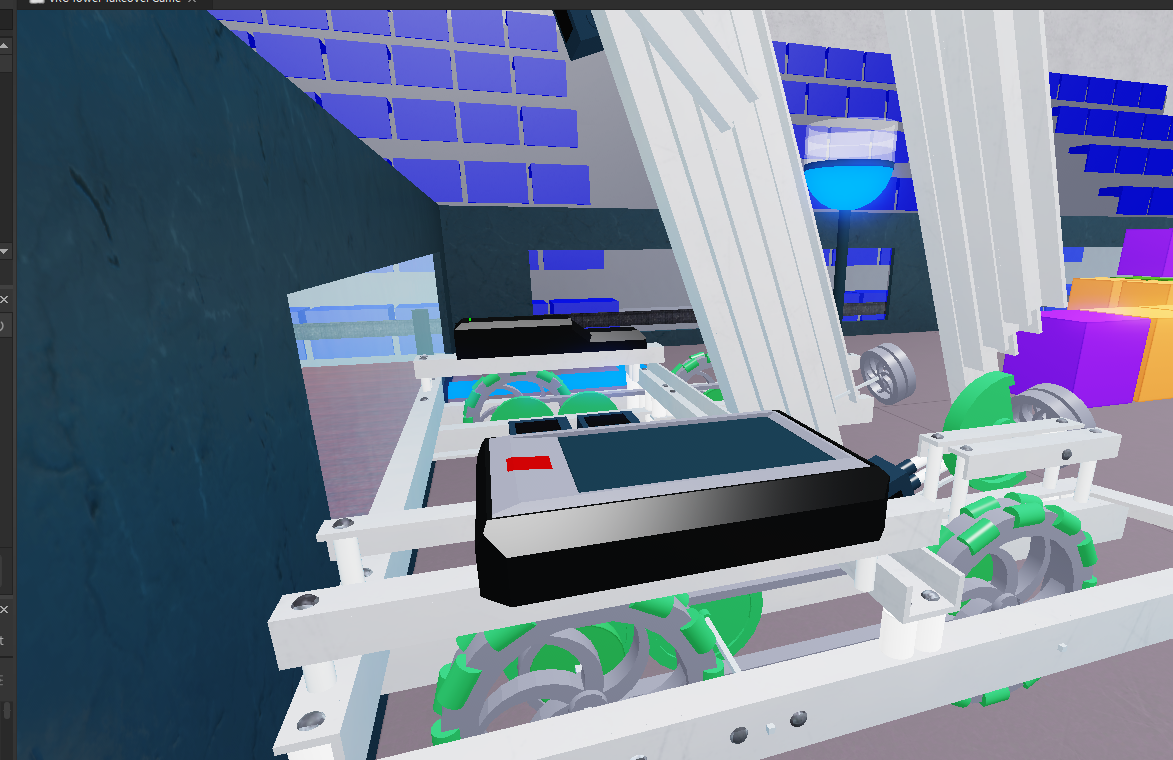 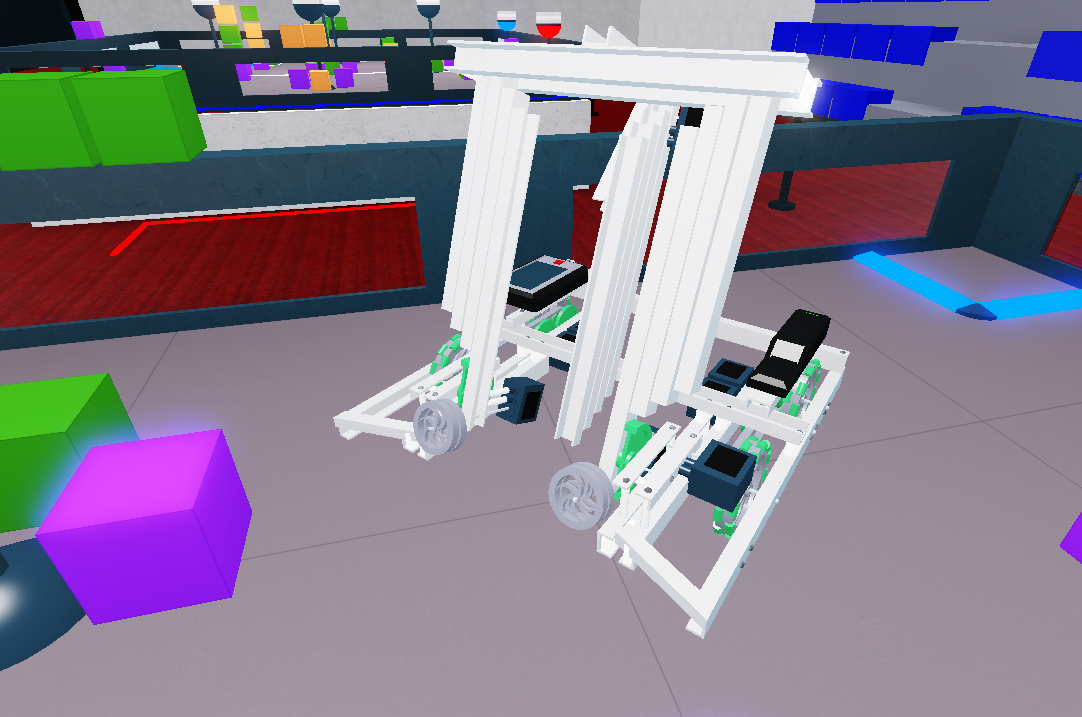 Everything you see here is made block by block. Nothing imported, just raw shapes that are fused and cut, no .stl or .step files from VEXRobotics.com are being used

The robot, although doesn’t have holes for the C-Channels and L-Channels, has screws which, if you look closely, you can see how they are screwed in and you can also see spacers and standoffs, which are used in a manner that is considered good practice for building your robot. I tried my best making the robot follow the hole grid at least while building it too.

Here’s a little update of the game:

What I still need to work on:

do you think its possible to have a feature to program your own autonomous/build your own robot? its a long shot (and a lot of work) but it would be a cool feature