It’s not about you guys playing defense it’s more about playing against defense. If you’re two motor drive you’re gonna be at a disadvantage on both speed and torque. You’ve got to have some maneuverability advantage.

This ain’t turning point, so I don’t believe that four motor drive is do or die. Teams can be successful with both, it depends on strategy. If a robot really wants to focus on towers, four motor drive is probably the best choice so that you can speed to each tower and push. However, if you are more dedicated to cube stacking, I don’t think four motor is that necessary since your drive will be faster than you can stack cubes anyways. The pushing power and stuff is nice, but not really needed to be successful at a tournament. This game is more about strategy than driving fast, since there are 66 cubes that are gonna be everywhere anyways.

But a faster drive means you’ll execute the strategy faster. The fact is your gonna have to be either fast or strong, while it might not be turning point defense is still definitely gonna be a thing. Now yes there are gonna be 66 cubes, your gonna have to plow through them allot, cause as you said strategy is gonna be important and it’s not gonna be just about picking up the closest cube, you’re gonna have to retrieve certain colors depending on the situation. Two motor drive is playing it way to close when it comes to power, having a little extra will be necessary when it comes to unexpected situations.

I think an important question to ask also is why you feel like you need 6 motors for scoring mechanisms. Sure the meta has not shown its face yet (at least not obviously), but using 3/4 your motors for scoring purposes sure is a whole lot of power, and raises some questions on the efficiency of the design. You should be able to make an effective scoring system with 4 motors no problem if you are a competitive team.

Personally, I would argue in favor of a 3 motor drive, such as a Kiwi Drive or an H drive with 2 side wheels.

But that leaves you with the same issue of being very susceptible to defense or those really fast drives like 250RPM, or even basic 200RPM drives cause they’ll have higher acceleration and be stronger. Honestly if you want to strafe, they’re is know reason that I can see to not go with an X drive.

But, unlike 2 motor drives, both drives I described are holonomic.

Yeah, but an X drive is both more reliable and stronger. An X drive also doesn’t waste a motor to strafe. Both H drives and Kiwi drives act as a two motor drive until you strafe, where only 1 motor drives it. With an X drive you get double the power for only one extra motor, and quadruple the power for strafing.

You don’t get double the power, not all of it goes forward.

In an X drive all 4 motors are working. H drive only has 2 motors to move forward, and 1 to strafe.

Yes but with the wheels at 45 degree angles a little less then half of the power is lost if I am not mistaken.

I believe 1/sqrt(2) power is lost with X drive going forward, while, with kiwi, 1/sqrt(3) is lost. This makes kiwi slightly more efficient

But you gain speed. You can easily rectify that with gear ratios

I am likely gonna go with a 2m drive with V5. I don’t see the need for a strong drive.

Here, this is the most important graph to understand X-Drive: 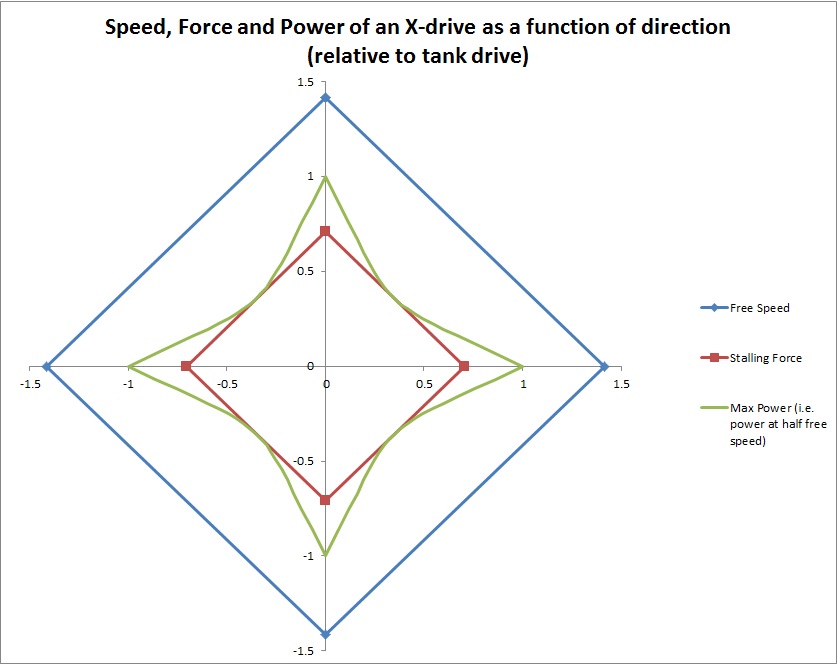 If you drive forward, backward, or to the side - all four motors are providing power, the velocity is MotorRPM x sqrt(2) and pushing force is 4 x OneMotorTorque/sqrt(2).

If you drive at a diagonal, then only two motors are providing power, velocity is MotorRPM and pushing force is 2 x OneMotorTorque. 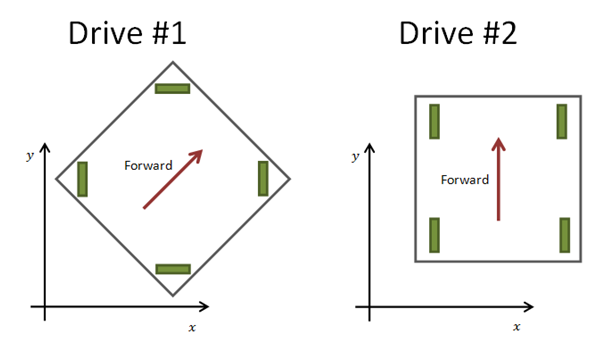 Essentially, X-Drive speed is 1.41 times faster and pushing force is 1.41 times weaker than the ordinary tank drive with the identical 4 wheels & 4 motors.

Also, here are the links to the similar topics from the previous seasons: Two motor drives?, X-Drive Speed, Extinct X-Drive?

1 Like
Swerve Drives, Omni Wheels, X Drives, and a plea to stop trolling
Wiki
What is the objective best drivetrain for Change Up
IsANerd May 8, 2019, 3:39am #37

You guys simply don’t get it. 8 motor drive is simply the way to go.

How many ratchets you planning on using?

It was a joke, but you could have 8 motors forward and 4 back and just have 4 functions, though you might have to be a gearing and ratchet wizard.