What is the objective best drivetrain for Change Up

the vectors are the same but inverse

Not necessarily, mecanums result in a shorter straightforward vector, as the force on the mecanums is directed out at a 45 degrees angle rather that directly straight as in an omni. 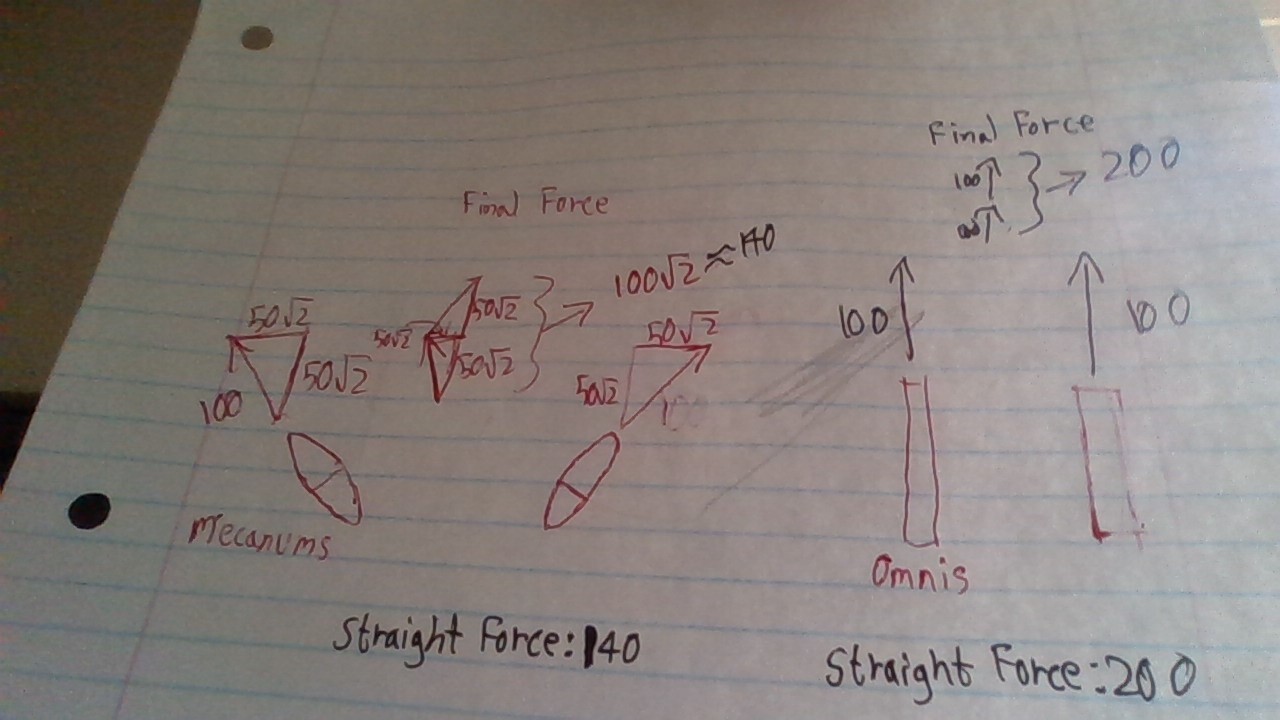 i realize that. plus drives work the same as mec drives in that sense too, yet they operate exactly the same as x drives in terms of the math behind them.

if meccanums fundamentally didnt had massive power losses due to friction why is frc using them? why do forklifts, and various other machines in industrial applications use them?

Mecanums result in power losses, albeit due to fighting one another rather than friction. My wording was poor in the first post that the loss is due to friction. Still, this means that mecanums do have a slower linear speed and a loss in torque, which is what I was trying to say.

No, the vectors cancel each other out, part of the power is directed towards the sides and creates a push-pull effect, that’s how mecanums go forwards.

Maybe that’s why the roller spin to reduce this effect making it such a small amount it won’t matter. Also when all the wheels go the same direction(forward and reverse) they end up working like normal wheels.

No, the vectors cancel each other out, part of the power is directed towards the sides and creates a push-pull effect, that’s how mecanums go forwards.

i’m not entirely sure this is correct (i’m not standing on much ground though, i’ll admit)… but wouldnt the same vector cancellation occur with x drives? how do you explain the MA change that x drives clearly demonstrate if the vectors cancel like that?

No, it does turn into heat and sound though.

First of all, this video does not demonstrate a difference in stall torque. Each motor can deliver the same amount of force, the stall torque is only determined by the radius of the wheel. A larger radius, the less torque the wheels will be able to deliver. Since all of the wheels in the video are 4 inches in diameter, or close enough to it, the torque applied from the motors is the same. Instead, the video demonstrates traction, or the ability for the wheels to transfer the torque of the motors to the field tile. The “traction” wheels that vex produces ironically have very little traction, which is why they would loose in a pushing match against the other wheels. 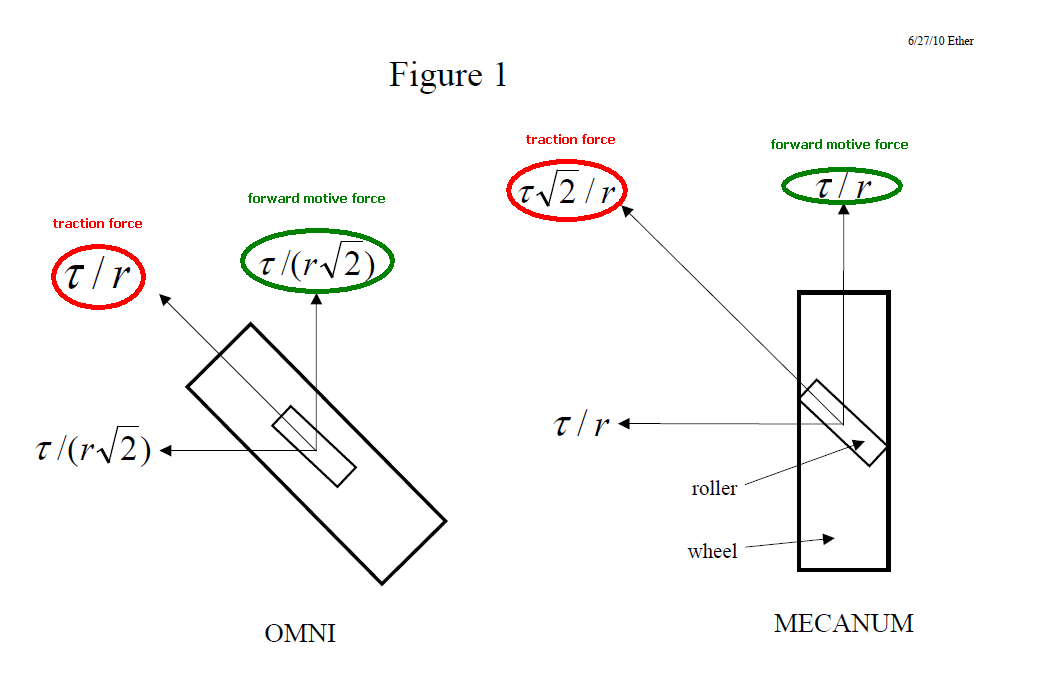 Now, comparing mechanum drive vs. x-drive vs tank drive, there is a lot more too it than just torque, you have to take into account direction. When moving forward, a mechanum based drive will have the same amount of torque as a tank drive because of their orientation (ideally). However, as @aryan.pradhan mentioned, the rollers are angled at a 45 degree angle, so when you are strafing the torque output is changed. In an x-drive, since the wheels themselves are angled at a 45, going forward, the amount of torque they output is much lower, but because of the kinematics behind it, they can go much faster.

Honestly, just like every year, the best drivetrain depends on your teams strategy. If you are focusing on match play, tank is usually the best option, as it has been just about every year. The simplicity of a tank base is also a huge benefit, and they are certainly easier to program. If you are focusing on skills, then an x-drive or mechanum drive would have much better mobility, but programming is more complicated. In my experience, it takes some more skill to build any omni directional base if you want it to drive/strafe straight. Another thing is that mecanums that we are allowed to use aren’t great, and because of frictional losses, they are usually the slowest of all of the different options.

When you move straight forward or backward, mecanum rollers do not rotate relative to the wheels, so no energy is lost there.

However, since rollers are angled at 45 deg to the wheel, they generate forces perpendicular to the wheel’s plane, that push wheels into the robot chassis and result in extra friction losses when moving. (In contrast, Omni tank drive has no perpendicular force component). 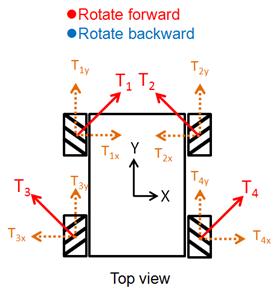 You will need to place well lubricated teflon or nylon washers between mecanums and the chassis to reduce the energy losses.

When you try to move sideways or turn, then friction between rollers and mecanum wheels starts contributing to the energy losses. Same as with the omnis, you could regularly wash your wheels in warm soapy water to remove all the sticky stuff that tends to accumulate around the rollers.

Another consideration is how much useful traction and pushing force you could get out of your robot’s weight.

Omni tank drive has the best conversion factor (1) for pushing forward but close to zero for resisting any sideway pushing.

However, for the mecannum or omni x-drive setups it is less efficient. To generate 1 unit of forward or sideways pushing force you will need 1*sqrt(2) units of ground traction (see more CoF info here and force vector diagrams here).

regular tank drive is best only because its super easy to program. xdrives don’t drive straight

going with meccanum is probably good if you want to strafe but imo you don’t really need strafing this season but strafing seems popular.

i think you built them wrong

you are building them wrong if they are not going straight.

you are building them wrong if they are not going straight.

yup, bad math in the programming could be a factor too for sure. if it’s going mostly straight and is just off by a bit like they’re saying tho i think it’s more likely their geometry itself is what’s off

so i’m overgeneralizing, it doesn’t really matter whether it’s built right or not because it’s not the only reason i’m choosing not to make an xdrive. i was just joking