This got brought up while my group of friends was jokin-- talking about the Corona Virus: won’t Chinese teams have a hard time participating at Worlds?

Or maybe some teams will just be missing a few member, i dunno, what do you guys think?

2 Likes
Is VEX Worlds even going to happen this year?
Will VEX worlds be postponed?
Worlds- Coronavirus
What is happening with WORLDS!
Qualifying for Worlds
Thread Killers
COVID-19 affecting Worlds
When will the COVID-19 Worlds Announcement be?
Australian Teams not coming to worlds due to Corona
Refund of WC registration fee due to coronavirus
Thread Killers
Sylvie January 29, 2020, 3:37am #2

I would not expect it to be an issue. 2019-nCoV is, contrary to the clickbait buzzy news stories, not nearly as dangerous or contagious as was originally reported. The only deaths currently have been from those who already had weakened immune systems. That being said, if it does become a bigger issue,

The virus has so much media attention right now because it is new, and gets clicks. I would not worry.

TL;DR: Nothing to worry about, China will be going to worlds just fine.

They’ve had to ban Mexican teams for this reason before

The reason the Corona Virus is frightening is because there are still a lot of unknowns about it (along with the fact there is no vaccine yet for it), like how exactly fast it spreads, at what stage can it spread, how fast can it mutate, etc.
A lot of major airports are screening for the virus and a few major Chinese cities have had lock downs to reduce the spread.

the next time someone coughs in the plane lets run

*if someone coughs in the plane

virus … Nothing to worry about

Your concern is not entirely without merit.

so we just got to wait and see.

but the most important point is - let’s not get panicky. and let’s not spread panic as well. and stay healthy!

Hong Kong only has 8 confirmed cases but we got put into emergency mode already, because of this we can’t even get into our robotics lab for who knows how long. I’m sure that the situation is much worse in mainland China though

I hope i didnt come across as unsympathetic.
But i was just answering OP’s concerns abt the corona virus and worlds.

As for the prep… to be honest, it is not much difference from US and Canadian teams not able to go to school due to extreme weather, Australia teams that were affected by the crazy forest fires, and Singapore teams that were kept away from school due to haze (few years ago).
I remember smuggling robots and parts out of the school for the students. Lol…

ya definitely, its crazy what some of us have to do in order to keep doing vex. We basically took our entire robotics lab to someones home… But I guess lots of teams have to put up with things like this, what can we do…

Per the NY Times:

◆ China said on Wednesday that 132 people had died from the virus, which is believed to have originated in the central city of Wuhan and is spreading across the country. The previous count, on Tuesday, was 106.
◆ The number of confirmed cases increased by nearly 25 percent to 5,974 on Wednesday, up from 4,515 on Tuesday, according to China’s National Health Commission.
◆ Thailand has reported 14 cases of infection; Hong Kong has eight; the United States, Taiwan, Australia and Macau have five each; Singapore, South Korea and Malaysia each have reported four; Japan has seven; France has four; Canada has three; Vietnam has two; and Nepal, Cambodia and Germany each have one.
◆ Cases recorded in Taiwan, Germany, Vietnam and Japan involved patients who had not been to China. There have been no reported deaths outside China.

To add a bit of perspective, literally millions of people just in the US get regular flu, and thousands die from it. The only difference here is the relative unknown characteristics of Corona virus, and the media hysteria ginning up fear.

It’s hard to play the balance between being excessively dismissive and overly wound-up on issues like this. This definitely has the potential to be bad, so I appreciate the diligence in preventing that. The flu is an existing bad. I’m glad we’re trying to prevent an additional bad spread unnecessarily.

Here’s the latest W.H.O. situation report on the Coronavirus. Seems the concern is driven from initially being told it’s not a big deal and then seeing a dramatic jump in numbers in the matter of days: 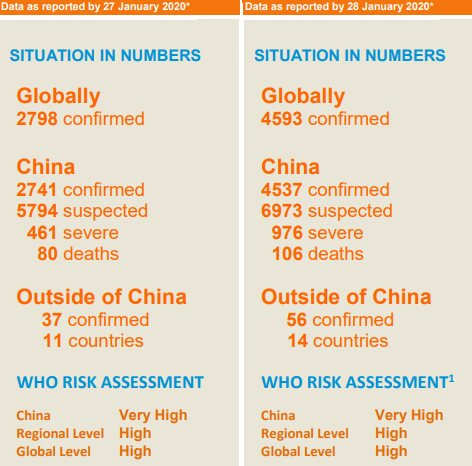 Its skyrocketed from 27 to the 28 but Worlds is still far away to where the virus might be contained or have a vaccine. You shouldnt worry about it since there is still time but if its spreads like wild fire, then thats a problem. Just focus on getting to worlds and when that times come to go to worlds… Just be sanitary. Its a new thing and people are crazy over it like the media. like @goofnrox said. about the flu. The flu is common but the corona virus just started spreading and people don’t know how to protect themselves.

The greatest problem is that even if the virus is contained, people from all over the world come to worlds, and if even a single person has the virus, they could possibly spread it to multiple countries because of it.
My guess is that China teams probably won’t be able to go to worlds unless a vaccine is developed or there is solid evidence that none of the members have it and their equipment is cleared as well.
The risk of spreading the virus is too great, especially since the virus has a (I believe) 2 day to 2 week incubation period. Worlds is only about 5 days, meaning that if anyone catches the coronavirus, there is a high chance that that person will be back in their home country before symptoms appear.

WE NEED THE CHINESE TEAMS!!!
How else will we have any competition?

I think it’s the other way around…

You don’t. Its easier lol

Soo… Seattle, California, and a Chinese friend got infected

Actually the friend just has the flu, but like, cmon, it’s a joke.