Hey, how do you beat turtling

Ok, I need you to tell me how your team beat the turtling strat.

P.S. Turtling is when you grab two towers and hid in a corner. It is very hard to beat and that is why I want to know.

P.S.S I would love if you could help!

I would say the three main ways to beat it our this.

Being able to get rings or get the alliance mobile goal from the back of the other alliance are the best ways to do so, double parking with rings is also a way score high with less goals. High rung scoring can also be a good way, especially if it is consistent

only way to beat it is if your opponents mess up in their execution at any point, or if you happen to have an effective tall goal mech and gain possession of the tall goal.

I have found attempting to get neutral goals back once opponents take hold of them to be largely futile, and my best advice is to just fill up on rings, get ready to double park, and make sure you pull off the double park with 3 goals and full rings. And then just basically hope your opponent fails to park with enough points. not much more you can do really.

We use this strat sometimes, and you have to double park with a goal, or have a good ring mech for high branches.

Standard turtle teams don’t have many options and they have to move quickly or they lose their opportunity to grab goals. Seven goals, four robots, and they need to grab three.

Much like a football team with only one play - eventually teams will figure out how to block that play. Watch tournaments on YouTube and see how the turtles run their plays. If you can disrupt any part of that play then they don’t have much of a strategy left.

I know it can be done.

To elaborate further, the turtle strategy basically is the opposing alliance telling you “We’re confident that you can’t score enough rings to make up this difference.” So, prove them wrong.

Let’s take a look at my handy-dandy scoring calculator. Assume the Autonomous Bonus is a tie in all these situations. 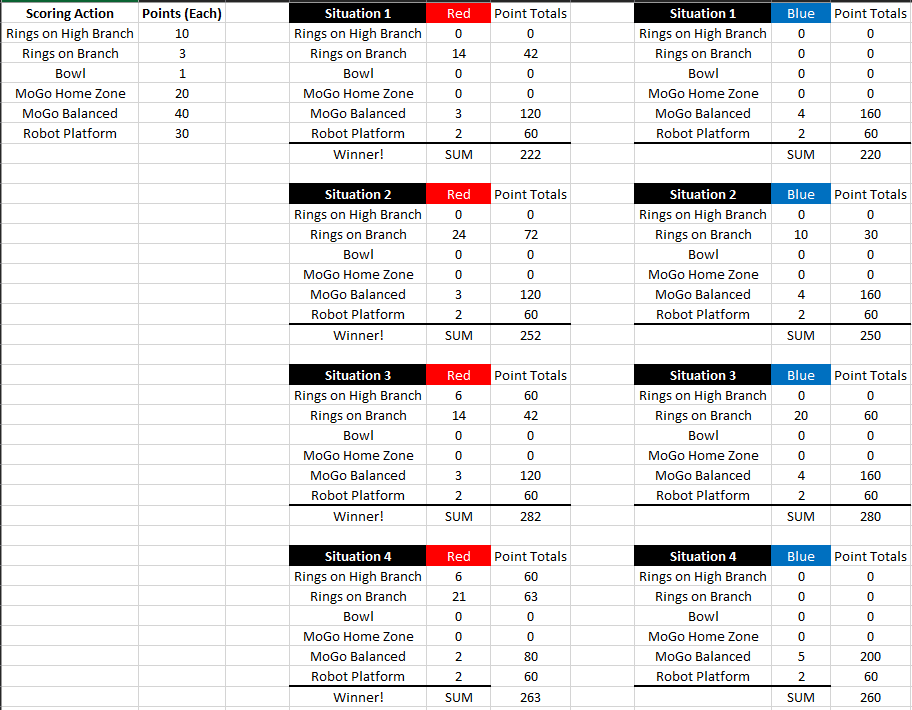 The situation you described (Situation 1), assumes that the blue alliance takes control of 4 mobile goals, then parks all goals and robots on the platform for the rest of the match. To beat it, you just need to take the 3 remaining mobile goals, score 14 rings on their branches, and balance everything on your own platform. Voila! You win by 2 points.

Situations 2 is similar, but includes the blue alliance scoring a few rings of their own before balancing everything on the platform. The same strategy still applies, and can still be overcome, you just have to score a few more rings.

Situations 3 gives the Blue Alliance even more rings. This can still be overcome, but you’re likely going to need to utilize the high branch, if it’s still available to you.

Situation 4 goes so far as to give the blue alliance 5 mobile goals instead of 4. Spoiler alert, this deficit can still be overcome!

If an alliance wins a match by realizing their opponents can’t overcome this early deficit, kudos to them. But personally, If I lost a match to two robots that were sitting idle in a corner for 75% of the match, I’d probably re-evaluate my own robot / strategy.

That is one of the best replys I have see ever! Thanks and I think, correction, I know that you are correct.

If I lost a match to two robots that were sitting idle in a corner for 75% of the match, I’d probably re-evaluate my own robot / strategy.

But personally, If I lost a match to two robots that were sitting idle in a corner for 75% of the match, I’d probably re-evaluate my own robot / strategy.

It is easier to blame others for our own failures; one would hope future engineers would break free of this mindset.

you’re likely going to need to utilize the high branch

@DRow Is there any data that shows teams scoring the high branch? I looked at the API and it doesn’t show the makeup of each match score. Do you have access to more granular scoring information?

Not to say that it doesn’t exist, but I don’t have access to anything of that nature.

I mean win the autonomous…consistently. Realistically getting goals is 95% auton. 5% picking them up when your opponent makes a mistake.

For beating turtling like everyone else said rings are the only way to gain points if you don’t have the majority of goals.

Talking About <SG7> (And How to Counter it in a Match)

With equally matched opponents, A 4-3 goal split is the most likely, possibly 5-2 if one side’s auton messes up. With the new way hoarding is defined, you can assume that each alliance will be able to “lock down” the goals. I am also going to assume that the alliance with the goal lead will win autonomous (as most autons that get more than 20 points don’t just score rings), and that no rings are going to be scored on the neutral goals. At high levels of play, you can assume that all of the goals will be elevated. This leaves the alliance with 3 goals 46 points behind.

In order to make up the 46 points without scoring goals, you have two options, parking and rings. An elevated robot is worth 30 points and a full alliance goal is worth about 30 points. This means that in order to win against an opponent with a 1 goal lead, you need to fill 2 alliance goals, fill 1 alliance goal and park, or double park.

However, your opponents also have access to these methods of scoring points. These means that to win, you need to perform 2 more of these additional actions than your opponent to make up a 1 goal deficit. So if you opponents park and fill 1 alliance goal in addition to elevating their 4 goals, your alliance now needs to double park and fill both alliance goals in addition to elevating all 3 of their goals.

TL;DR In order to counter a goal deficit, your robot needs to be able to park and score rings.

While this post is from December, I feel it still applies.

one assumption being made here is that the turtling alliance is ignoring or neglecting rings, when in competitive matches, this is not the case. The alliance that comes away with 2 neutral goals has the full ability to fill up their alliance goals with rings very quickly, good robots can do this within the first 5-10 seconds of a match, and sometimes even during auton. So turtling and rings are not by any means mutually exclusive.

If they have one more goal then you, and both alliances fill up on rings, the match is theirs to win. Your best strategy at that point is simply to hope they mess up. which of course is not something you have control over. I have seen instances where a team starting a match with a goal defecit is able to go over and steal back a goal, but this is rare, especially against very good teams. The thing I see much more often is not that the alliance in the defecit does anything in particular to try and win back the match, but that they pull of a good double park with their three goals, and their opponents mess up on their park, or don’t put up enough goals/robots to win the match.

This is of course, ignoring the tall goal, which I have hopes for at worlds. If that comes into play, there are ways to make up the point defecit, even if your opponent plays their game perfectly.

This is of course, ignoring the tall goal, which I have hopes for at worlds. If that comes into play, there are ways to make up the point deficit, even if your opponent plays their game perfectly.

Does this mean the auton fight is going to be over the tall goal and the goal majority? Even if the red alliance can’t do high rings, if the blue can, it will be in red’s interest to keep that goal from blue, and thereby keep them from having the potential to win.

if you know your opponent can score tall rings, and you think you can beat them to the tall goal in auton, then yes it makes sense to rush the tall goal.

I think tall goal will be come into play the most it ever has during worlds. Even if you lose the goal rush but manage to win the tall goal, winning is extremely viable. Even with just a preload mech, that extra 30 points is the equivalent of a nearly full goal (I believe the comfortable cap is 10-11 rings?) or an extra robot parked.

Hey, I was thinking that if a clamp was made so that it angled the tower down it would be hard to steal from it. What are your thoughts.