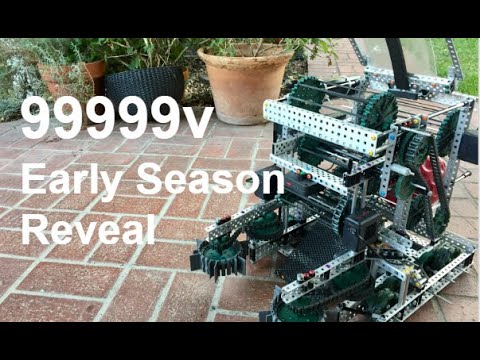 Huge thanks to SCA for helping me figure out some of the details, and in general just being a great place to bounce off ideas and concepts.

I hope you enjoy the reveal video, and if you have any questions I’d be glad to answer them. I will probably make an explanation video after I complete all the finishing touches to the build. Have a good season!

Awesome robot. Rubber band rollers seem to be the way to go. I’m a little mad about that, as robots will now be even more similar to past ball games, but it is what it is. Great build quality keep it up🙂

Just a reminder to take into account that my conveyor having almost double the capacity definitely affected cycle times and the speed at which the conveyor could run.

Just a reminder to take into account that my conveyor having almost double the capacity definitely affected cycle times and the speed at which the conveyor could run.

oh absolutely. the capacity is a trade off, and imo its not worth the higher cap for sacrificed cycle times. capacity is good in skills though, and can be powerful if you use it well.

Cool bot. Traditional treads and flaps aren’t the best intakes this year tho

Cool bot. Traditional treads and flaps aren’t the best intakes this year tho

I have an idea that’s not yet developed enough to be released, but here’s a hint: Do you ever have problems with chasing a ball because the flaps moving away from the bot keep pushing it?

Are you thinking like a big open v-shaped intake on the front? could be interesting to try out

No, that wouldn’t be able to this. Besides, it would most likely still have that issue if the flaps are too big.

oh yea, duh. I completely forgot about the main part of the game

I don’t have much practice driving around chasing balls because I only have 6 tiles atm, but from my tests the flaps generally don’t slap the ball away from the robot, they just kind of flick it in front of the bot so it actually helps. unless the ball is all the way to the very edge of the intake, but that’s just driver practice tbh. I’m sure there’s a way to have perfectly funneling intakes, but I haven’t found it yet.

Darn it! Beat me to the pooper design

I love the “pooper” design! I think it is more efficient than a traditional trap door design.

I’ve been calling this the pooper because it lets your robot poop balls.

I see you are a man of culture as well

the hoarder sometimes is referred to as the diaper as well.

i feel rubber bands are the faster offensive route while conveyor with a huge capacity is more of a defensive bot. in that it will go around dropping on ball in the top of goals following one of the other team’s robots.

I can definitely see the meta splitting like that.

one half is low to mid capacity (3-5) ball hoods that specialize in speed, and larger more defensive snails that hold like 7 balls. personally I think that cycle speed is more important, because you want to get the ball from the intakes to the top as fast as possible, and a larger cap will slow that down. and there isn’t much benefit to the large cap, because you want the balls in the goals, not in your robot. if you’re holding on to 7 balls at once, you’re going to be wasting time you could be spending descoring and cycling, meanwhile your partner will be short on balls because you have them all and your opponents will have time to pull ahead.

I think the gameplay will be very similar to turning point in that the strat will be to pull ahead at the start, then stay ahead the rest of the match.
That means win auton, get a bunch of owned goals at the start, and just keep one step ahead of your opponent in terms of cycling. I just feel that a nimbler smaller capacity hood is better at this than a slower 7 ball snail.

while conveyor with a huge capacity is more of a defensive bot.

I don’t think there is any reason to use tread and flaps for the indexer tbh, even with a big capacity bot, rubber band rollers will simply be more efficient.

if you’re holding on to 7 balls at once, you’re going to be wasting time you could be spending descoring and cycling, meanwhile your partner will be short on balls because you have them all and your opponents will have time to pull ahead.

Not necessarily true, the higher capacity robot won’t have to go back to field/intake balls after scoring and cycling balls in a goal. That could be more effcient depending on the placement of the balls on the field. Because of this, the success of each robot is highly dependent on strategy.