Differentials —“Some help from my fellow SCA member”

Recently this post showcased a CAD model largely based off of pictures shared of our mid season differential drive train. We’d like to take this opportunity to explain our design process.

Initial differentials were designed for a Db4. these aren’t easy. 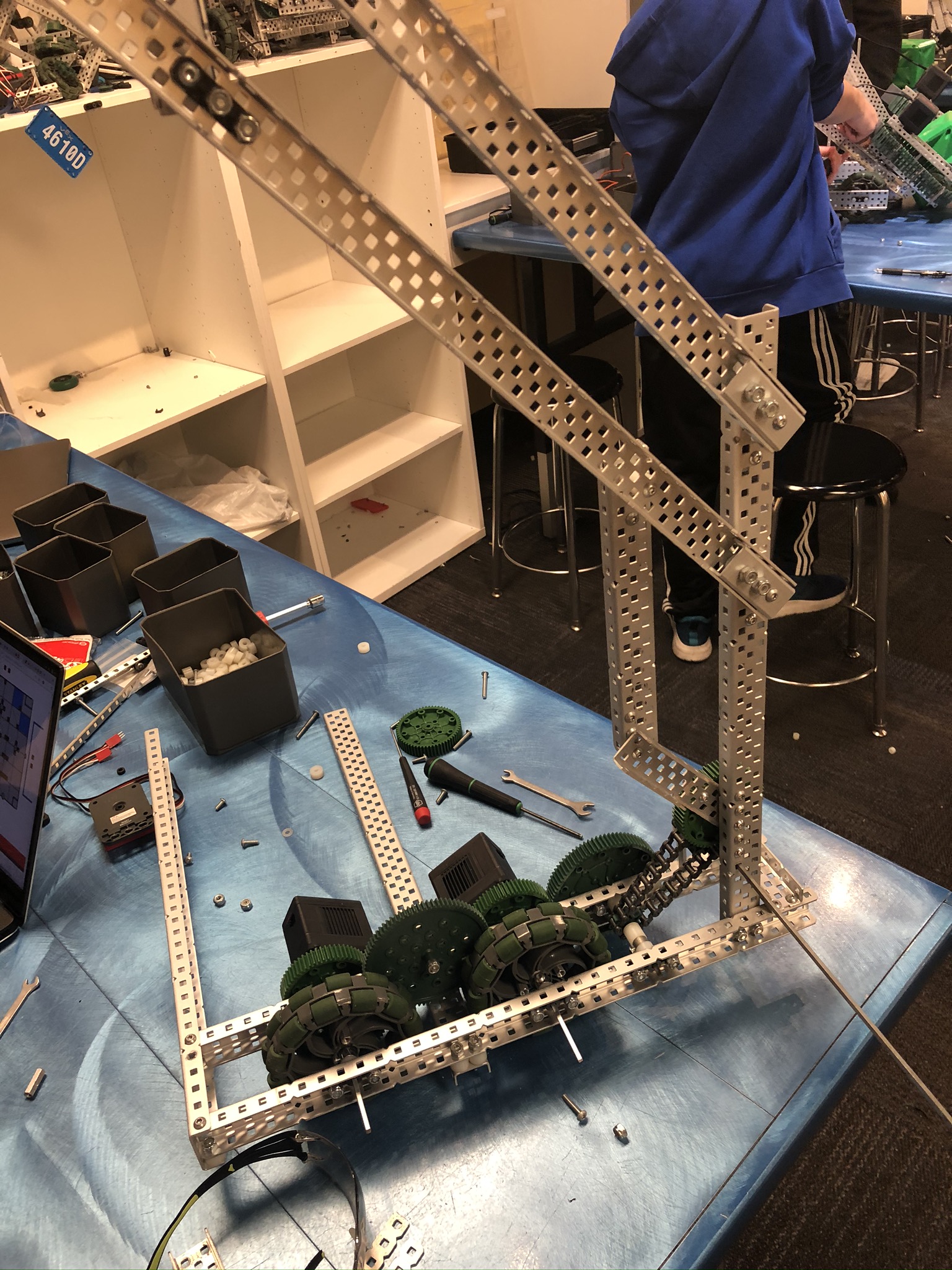 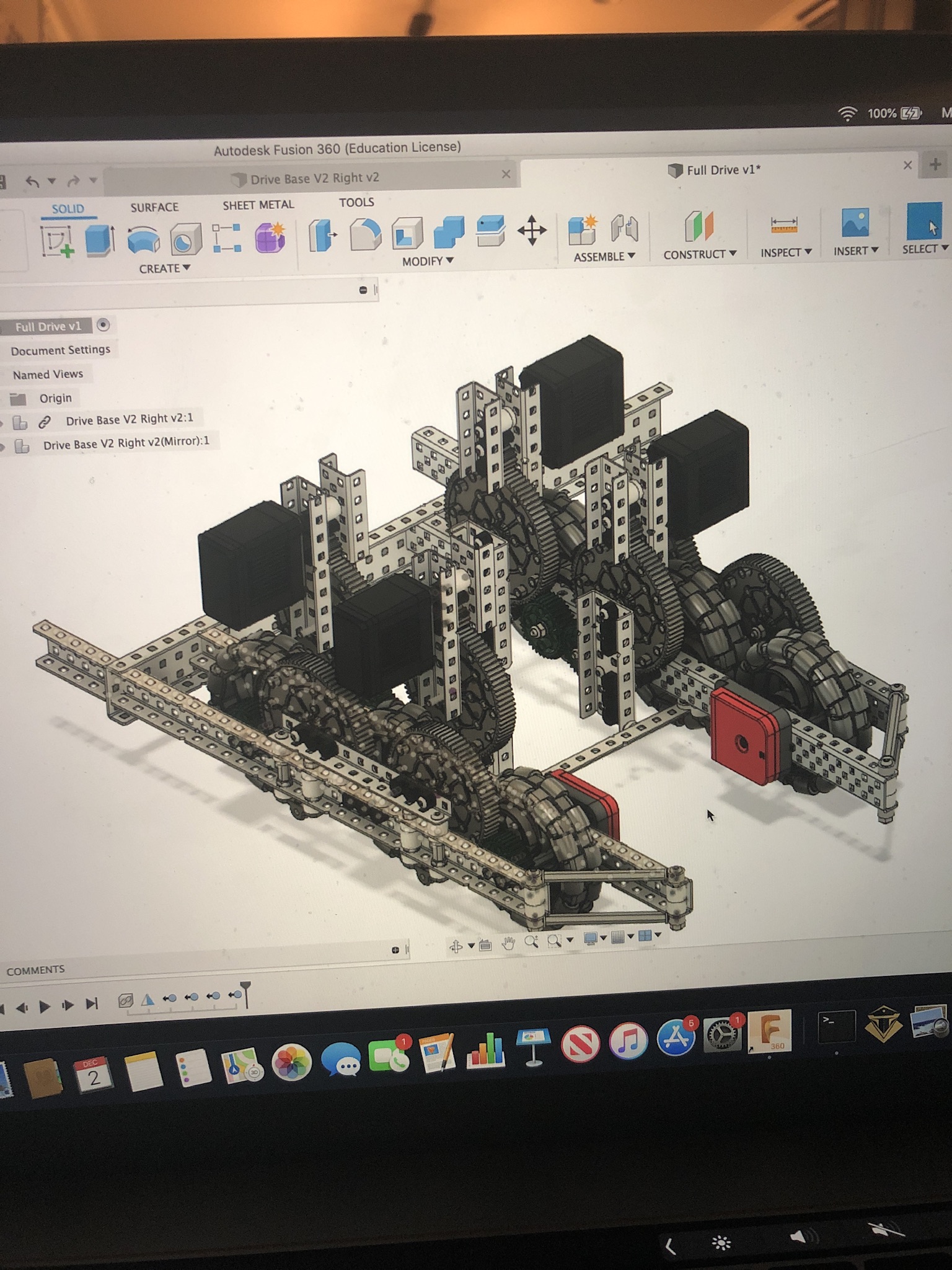 We started with the cad. This 3-wheel variant was pretty ugly, but it still shows the main concept.

We learned never to use 3-wides for gearboxes standard 2-wide c-channel are much easier to line up. We also decided there was no need for 3 wheels, so following iterations use 2. 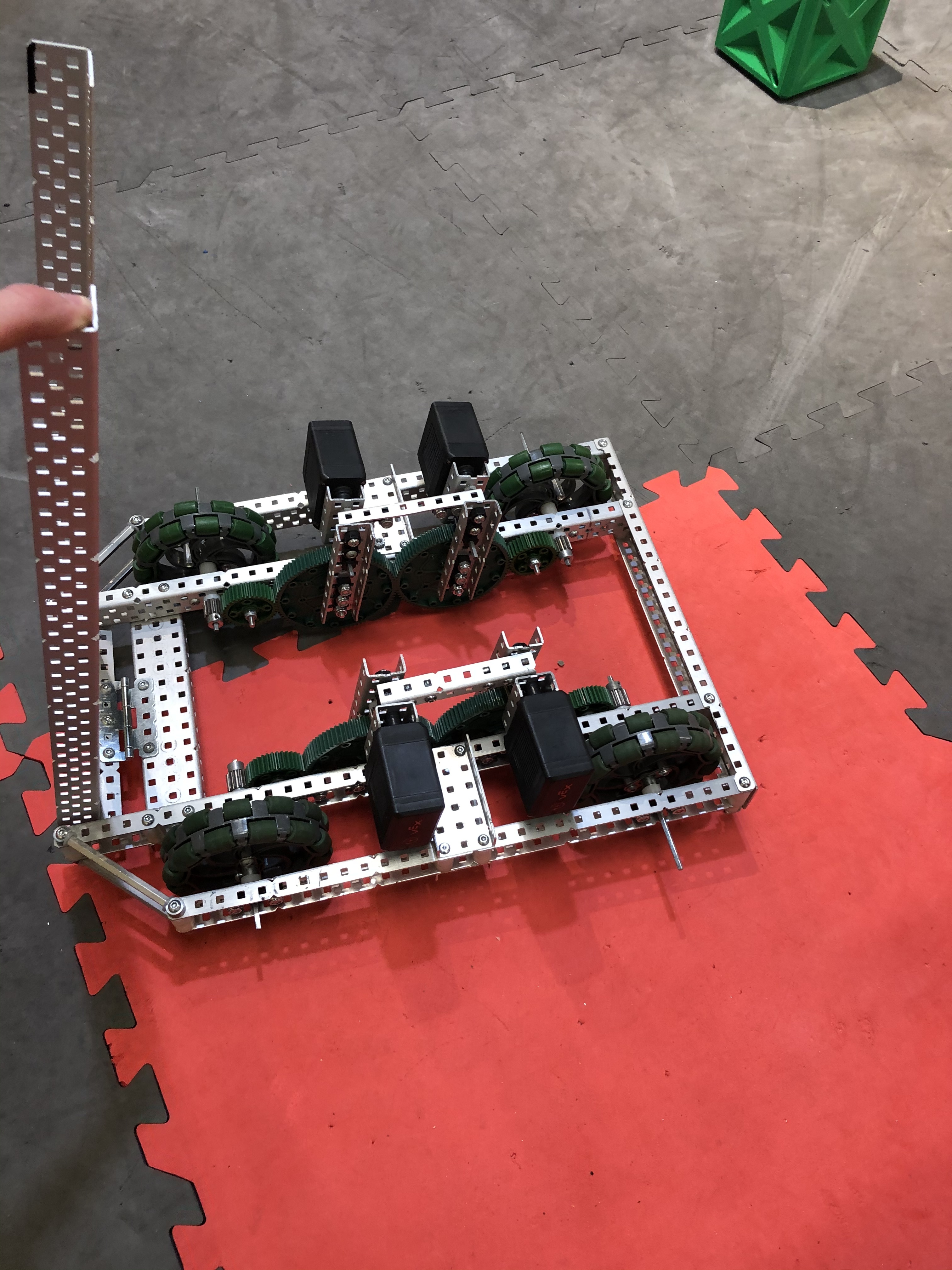 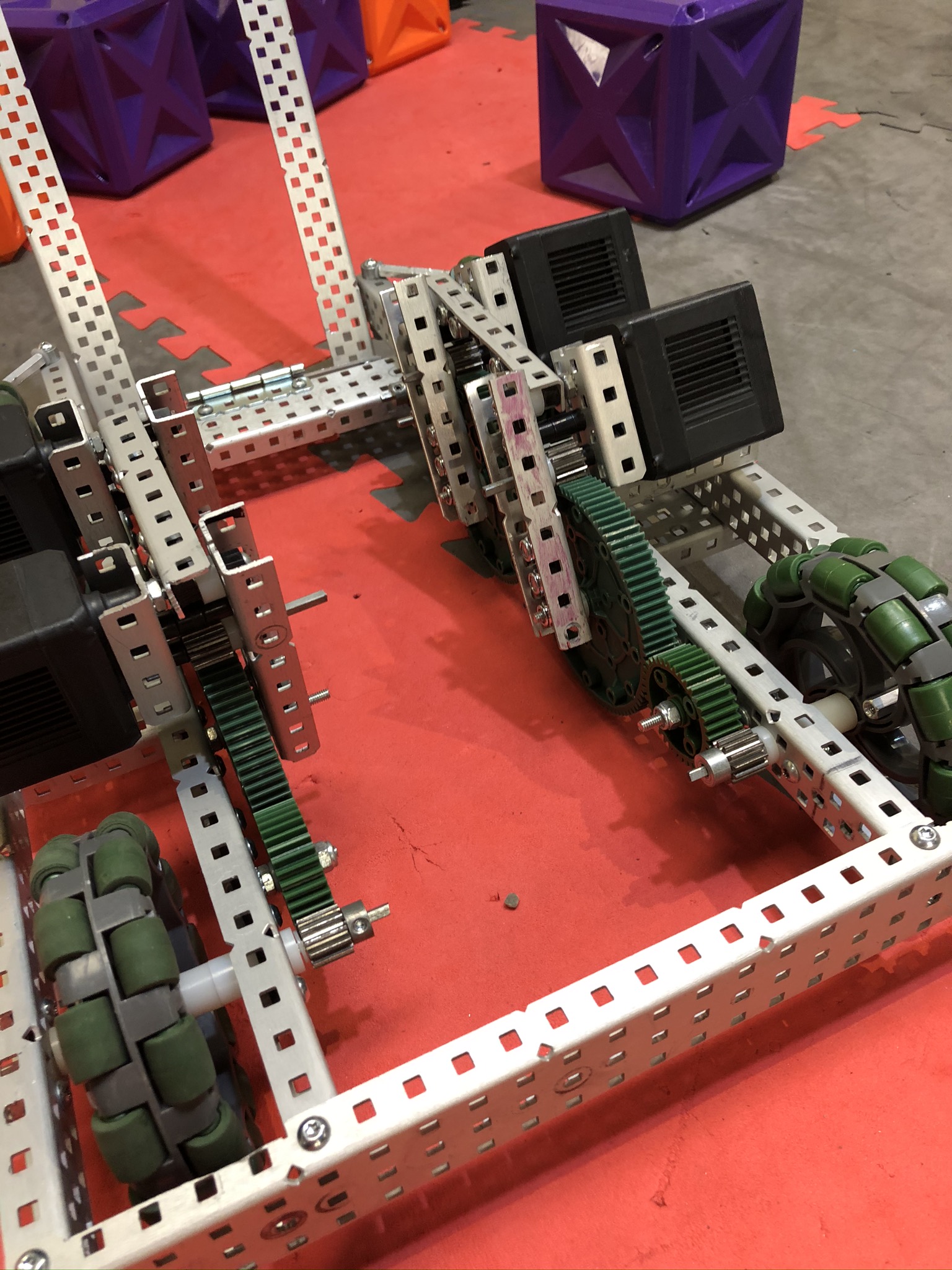 This iteration was much cleaner. 2 wheels gave us a lot more space length-wise. However, if you’ve ever built a differential before you’ll notice I’ve got an extra idler gear. Oops. The 4-bar differential also didn’t have a large enough range of motion to provide significant leverage. Even though we had the equivalent torque of 2 100rpm motors (double the standard 1 100rpm motor) we knew they’d run hot from driving, and we needed to be able to tilt late in a match. 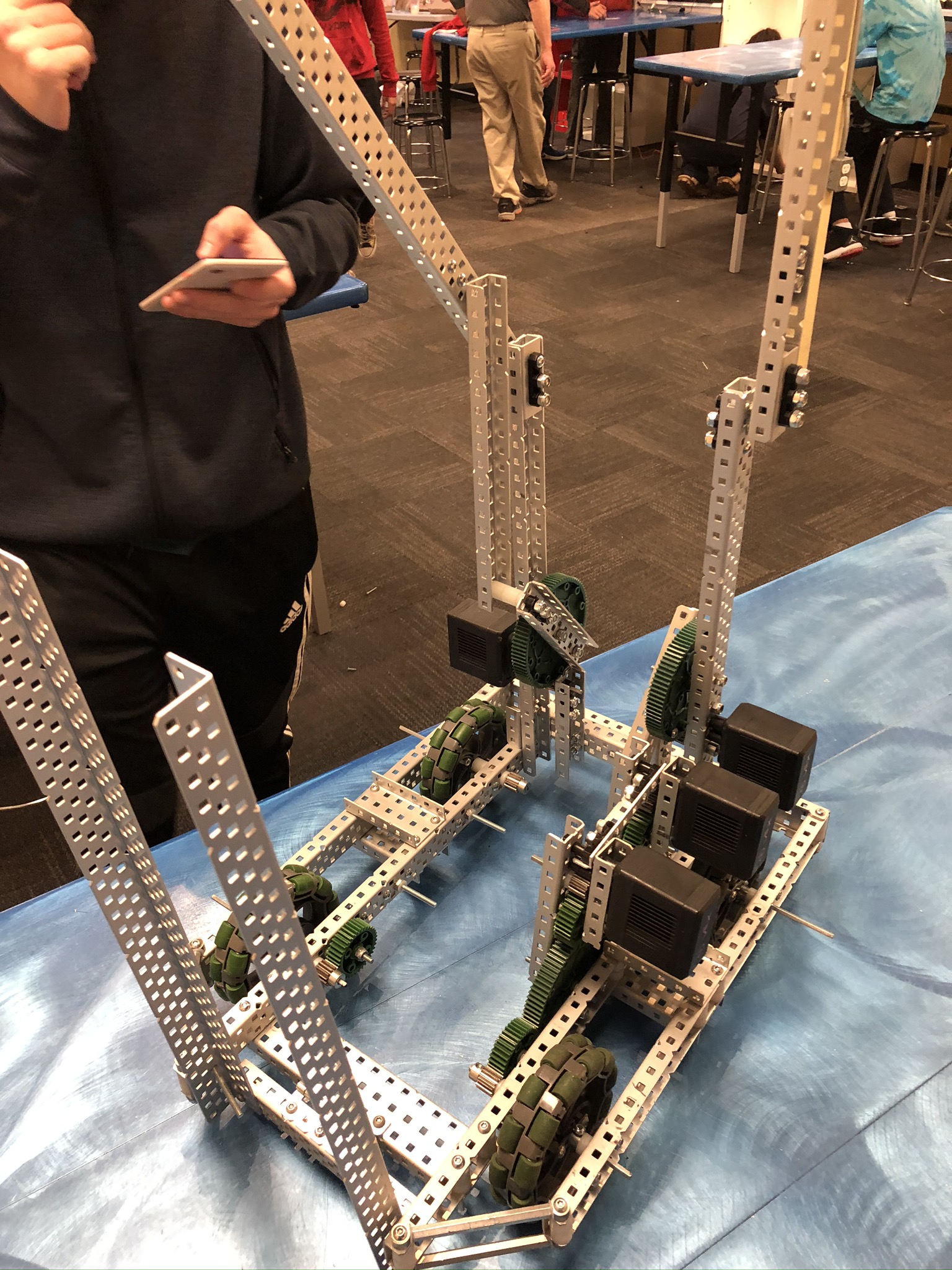 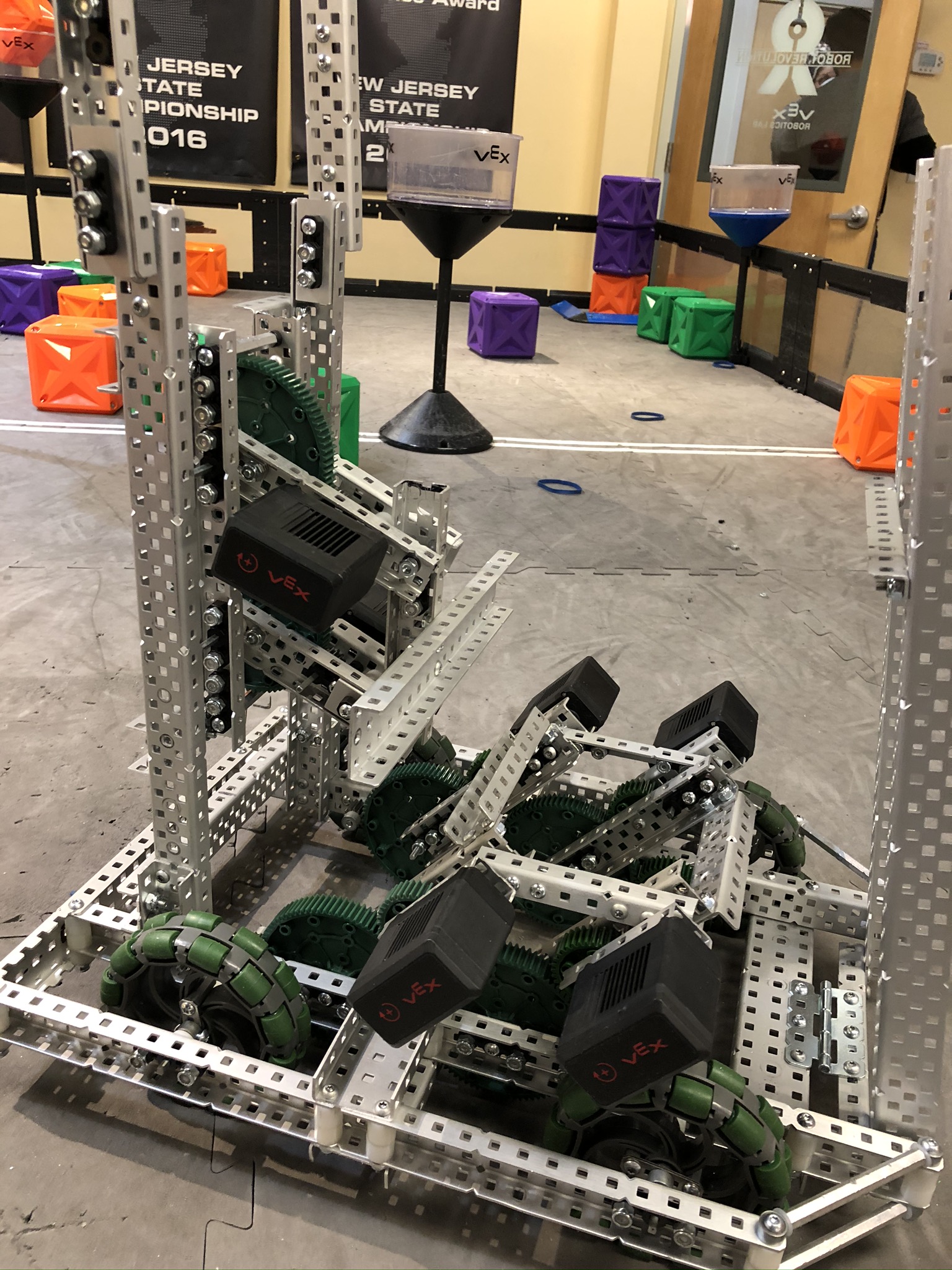 Ignore the second differential on the lift we ended up scrapping that because the 6 motor drive provided wouldn’t let us lift and move at the same time, and we thought that was more important than the defense that was becoming more and more illegal at the time.

We added 36t idler gears to our cars in this version, so that the motors would be a bit higher up, and we’d have a larger range of motion before they hit the hard stop back towers. We were pretty happy with this. All gears were on keps screw joints except for those connecting to a motor or a wheel, which provided a super rigid— low friction —system. The screw joints were also being used as cross bracing for the cars which really helped to keep things lined up. Keps joints op. The standoff collar support structure on @Sylvie’s animation would probably cause alignment issues as standoff collar building is inherently hard to tighten and keep straight. 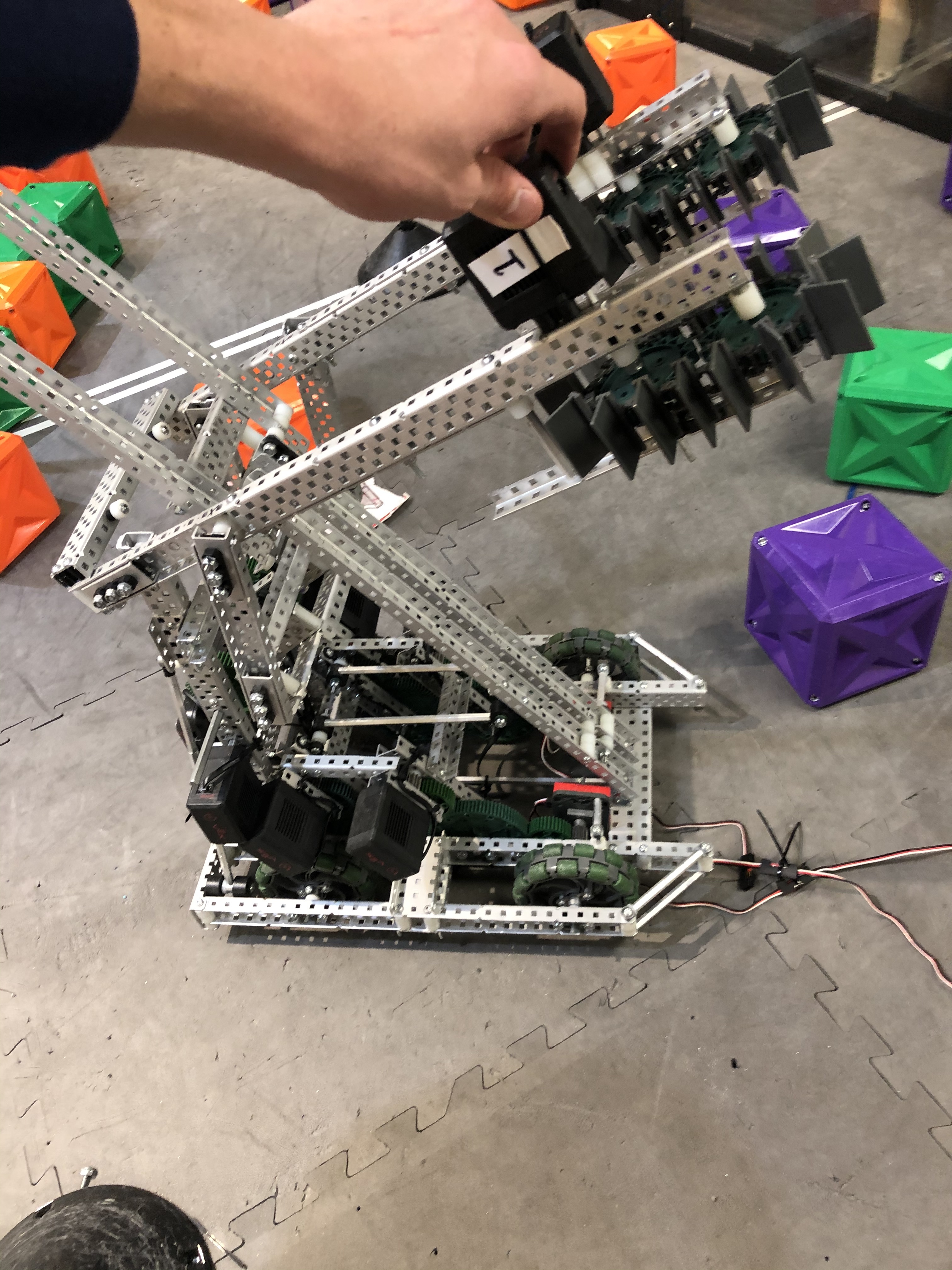 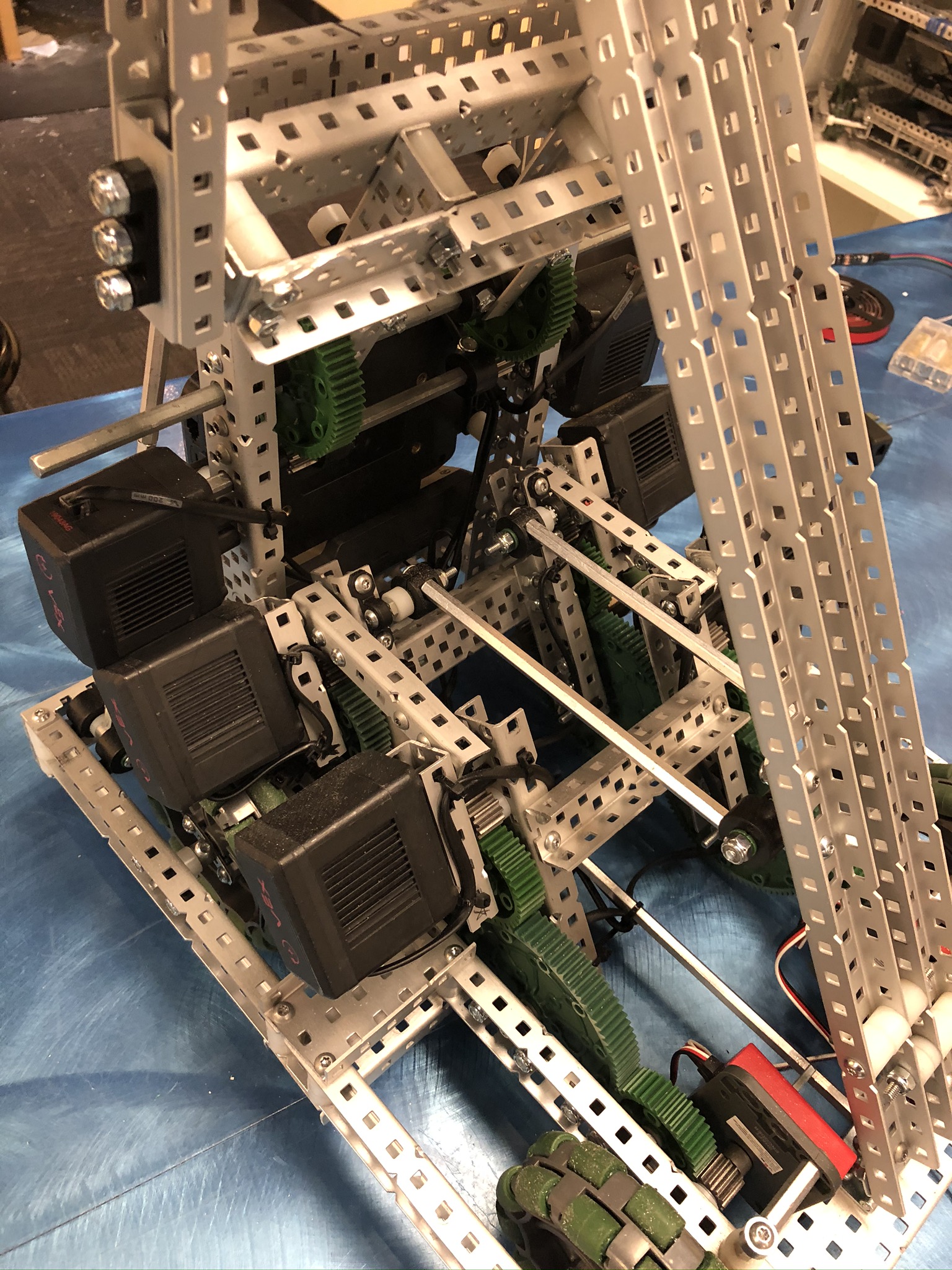 Here’s why we didn’t bring a differential to states:

It’s quite hard to fit a cube lock on a differential. Possible, but difficult.

The extra motor on the lift let us run a 5:1 200rpm lift which was pretty quick, but we’d been able to do the same with 1 motor and banding so we weren’t significantly using the extra motor. The added complexity of a differential didn’t seem worth it.

Since the drive and tilter were mechanically linked, all momentum from 1 system would be transferred to the other. For instance if we drove quickly in a straight line and stopped short, our tilter would shift forwards and throw cubes.

Even with lithium grease, our drive would get hot after about 15 minutes of drive time. This was enough for a match, but it made Stacro tuning pretty difficult, and skills sessions were super slow. Canned air only goes so far.

I hope this can be a resource for future motor sharing enthusiasts. Maybe next year, there will be a hang or some other scoring objective that could provide a viable function for extra motors.

Nice explanation! This definitely goes more in depth than my post did.

You guys definitely went crazy with the differentials didn’t you

did you have any issues with this gear skipping?

Nope two gears next to each other on axles (especially cantilevered) have a tendency to skip, but the idler is on a screw which adds enough rigidity to completely avoid all skipping issues. I’d also never recommend cantilevering. The axles go through two points of support tho, so I don’t consider them to be cantilevered. Cantilevering screw joints is completely fine.